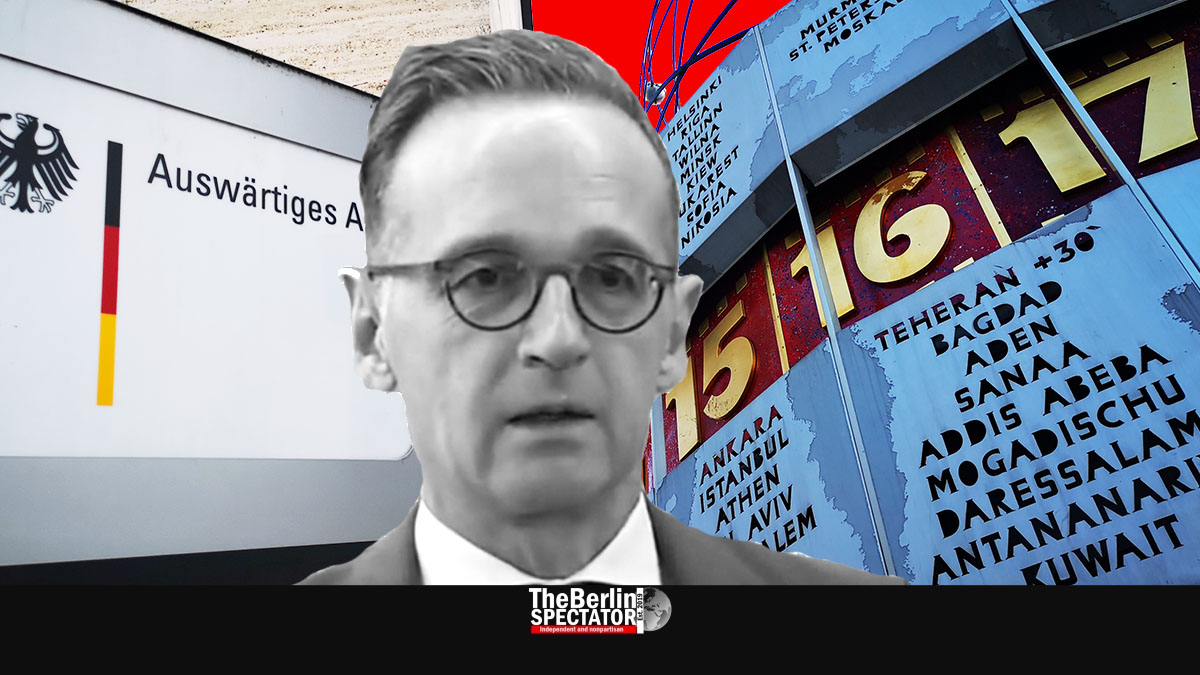 Germany’s Foreign Minister Heiko Maas and Commerce Minister Peter Altmaier went into quarantine today. They are two of tens of thousands of Germans who are confined to their homes because of Corona.

Because of a Corona case among his security agents, Heiko Maas went into quarantine at his home on Wednesday, a spokeslady at the Foreign Ministry in Berlin confirmed. A first Corona test the Minister had done had turned out negative, she said. The Foreign Ministry was in contact with the health authorities, in order to establish how to proceed with potential contact persons. Maas’ people are playing it by the book, it seems.

The same applies to the Ministry of Economy. Minister Peter Altmaier announced, a staffer of one of the colleagues present at the Council of Trade Ministers had been tested positive. That is why he had gone into quarantine as well.

Heiko Maas and Peter Altmaier are not the first high-ranking government members who had to go into quarantine during the Corona epidemic. Early on, in March, Chancellor Angela Merkel was forced to work from home for two weeks, after she had been in contact with an infected doctor. E.U. Council President Charles Michel went into quarantine earlier this week. Because of the issue, the upcoming E.U. summit was postponed.

Those news are symptomatic of what is going on in Germany and Europe these days. Things are not looking good at all. Professor Christian Drosten, one of the leading virologists, said Germany was “not yet fully prepared” for what was about to come in the next months. Things needed to change, he stated in Berlin. The Corona pandemic was only commencing right now, including in Germany, Professor Drosten said.

‘No Reason to Lift Restrictions’

Indeed, the situation is critical. From the perspective of Germany, nine countries on the continent are high risk areas. They are Spain, Belarus, Ukraine, Bosnia, Serbia, Montenegro, Albania, North Macedonia and Turkey. Regions in additional eleven countries were declared high risk areas by the Foreign Ministry in Berlin. They are Bulgaria, Romania, Croatia, Hungary, Czechia, Austria, the Netherlands, the United Kingdom, Belgium, France and Switzerland.

Germany itself has areas with exploding numbers as well, which is why Chancellery Minister Helge Braun curbed hopes for an easing of anti-Corona measures on Wednesday. Ahead of the upcoming meeting Chancellor Angela Merkel will conduct with the First Ministers from the federal states within Germany, Braun said there was no reason to lift restrictions right now.

It was important to impose restrictions at Corona hotspots, he explained, in order to make sure the efforts to curb the virus as much as possible in all of Germany could be successful. A few months ago, when the number of Corona infections decreased substantially, Germany’s sixteen federal states started taking decisions about anti-Corona measures themselves. Now that the situation is deteriorating, some decisions are supposed to be taken at the meeting on Tuesday.

In the meantime, Hamm, a city in North Rhine-Westphalia, just tightened its Corona rules because of its rising infection numbers. As of right now, up to five persons or members of two households are allowed to meet in public. At schools, masks have to be worn even in class. These kinds of rules reminded residents of the first phase of the Corona pandemic in March and April. In Hamm, the Seven Day Incidence number stands at 95. Alarm bells sound in regions or cities in which that number reaches 50.

In Berlin, many new infections were reported in three districts. A total of 117 new infections were registered in the German capital within 24 hours. Sixty-one Corona patients are being treated at Berlin’s hospitals, 20 of them at intensive care units. So far, 228 infected persons have died in Berlin, since the Corona epidemic commenced.