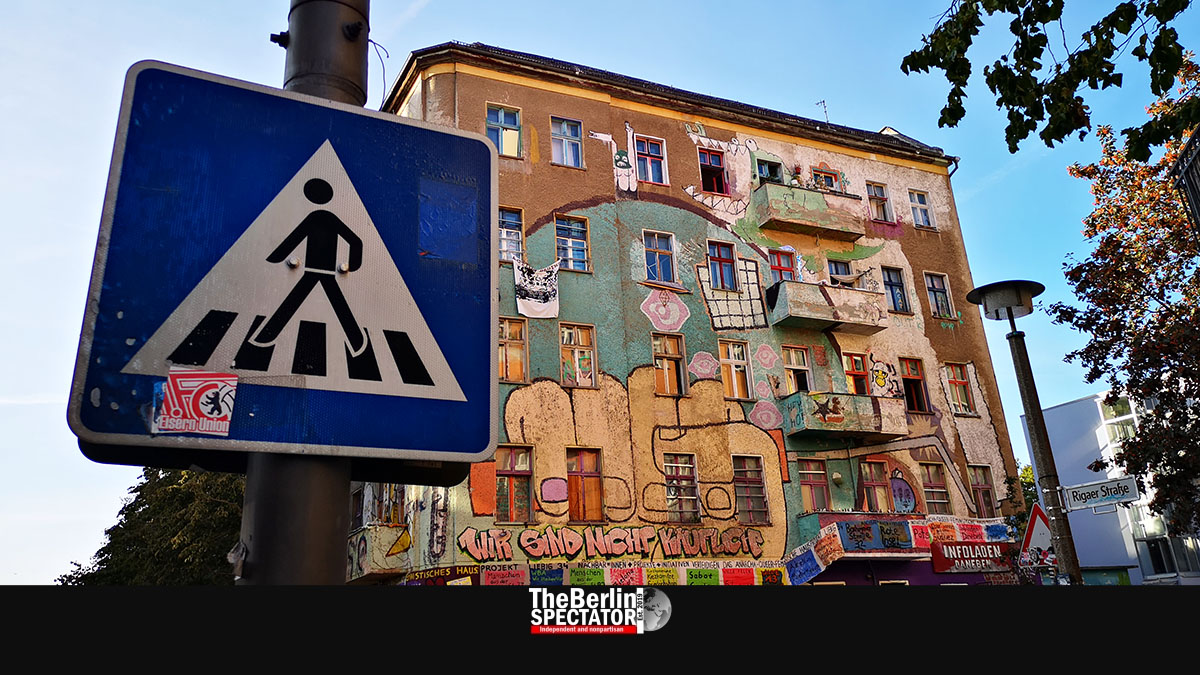 Extremist left-wingers in Berlin announced they would fight their eviction from an apartment building in Liebigstrasse scheduled for October 9th, 2020. “Chaos instead of eviction!” is the slogan they posted all over the Internet.

Berlin, September 24th, 2020 (The Berlin Spectator) — “We are angry!”, illegal residents of an apartment building in Liebigstrasse 34 said on a website. “Every attempt at a self-determined life” had been crushed. “We are fed up with all the bullying in the neighborhood and everywhere else. We are fed up with their repression, the state and its servants, who make it impossible for people to shape the city they live in. We sh*t on investors.”

Peace and Quietude vs. Chaos

The bullying the residents of the former squat in Berlin’s ‘Friedrichshain’ district mentioned is actually something they have been accused of themselves, by residents in the neighborhood who are tired of the violence, the trash, the attacks with paint bombs and the firecrackers. At this stage, people there have to put up with two buildings with anarchists, namely the one in Liebigstrasse 34, and one in Rigaer Strasse 94, which is just a few steps away.

Cars are being damaged, families do not feel safe walking the streets in the neighborhood, there is noise at night and police operations are creating an atmosphere of tension. What many neighbors want is peace and quietude, while the inhabitants of Liebigstrasse 34 want to create “chaos”. They insist on living in any buildings they like.

“We don’t give a sh*t about the yuppies who, with their new buildings and condominiums, are displacing the people who spent their lives here”, the Liebigstrasse 34 people say, “for whom the street and the ‘Dorfplatz’ square are more than just the way to the co-working space. We demand a city from below. We want to occupy houses.” The owners of the building and many neighbors, on the other hand, want it to stop.

To the ‘activists’ in Liebigstrasse 34 and their supporters, October 9th is ‘Day X’, because that is when a court-appointed officer is supposed to show up, in order to take over the building. They announced they would “prevent this eviction with all means”. What this means is that they are ready to become violent. It would not be the first time.

Note: The Berlin Spectator calls individuals, groups, parties or organizations ‘radical’ or ‘extremist’ when they oppose Germany’s Liberal-Democratic Constitutional Order by fighting democracy or attacking the country’s institutions. This applies both in the far-right and far-left spectrum.

On another website, the radicals admitted they had destroyed windows and thrown color bombs at the office of a real estate company in ‘Bötzowstrasse’, as well as an office used by the Greens. The Berlin authorities expect more activities of this kind, and a tough day on October 9th.

Since the closure of a pub called ‘Syndikat’ in Berlin’s ‘Neukölln’ district on August 9th, 2020, not too many symbols of the German capital’s radical left-wing scene are left, also because yet another former squat, the apartment building at Liebigstrasse 14, just across the street from no. 34, was evicted nine years ago. It took 2,500 police officers a few hours to get the job done.

In 2018, a 10-year lease with the residents of Liebigstrasse 34 ended. They were given notice but did not leave. Now, two and a half years later, the building might have to be evicted by force. According to the Berlin District Court, a verdict it announced in August is enforceable. Not only do the residents have to vacate the building, but also pay 20,000 Euro they likely do not have.