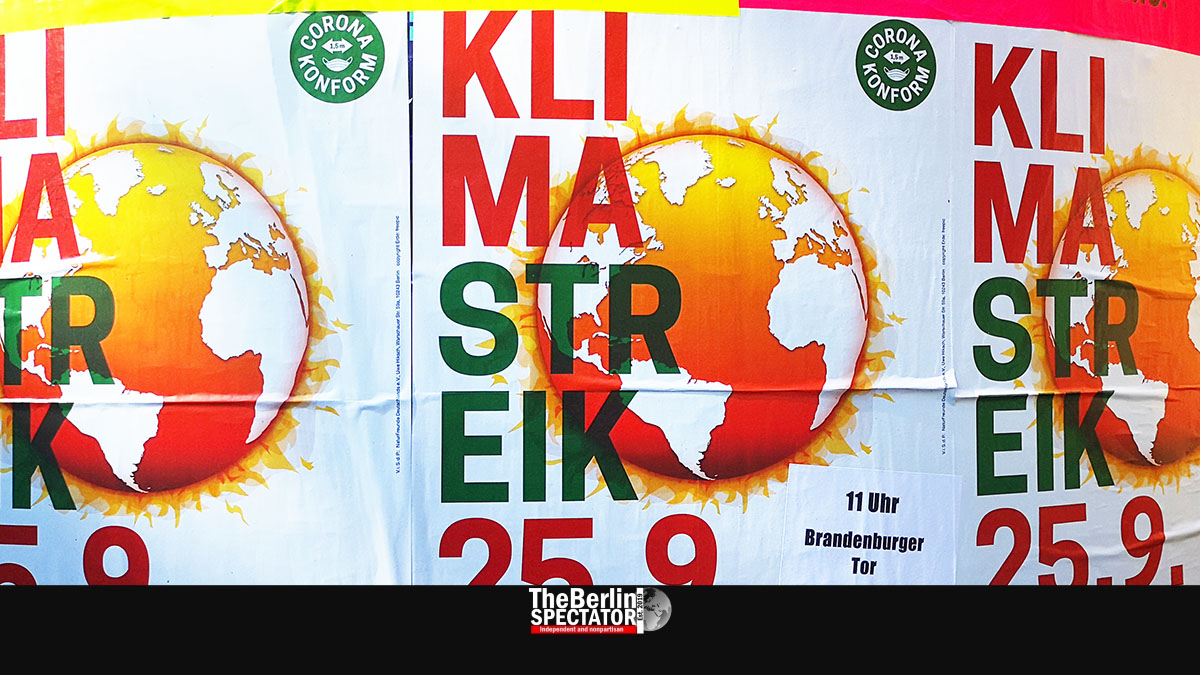 Fridays for Future is back. On Friday, the movement intends to stage protests in as many as 400 cities and towns all over Germany and beyond.

Berlin, September 24th, 2020 (The Berlin Spectator) — “The climate is warming up. So are we.” This is how Fridays for Future (F4F) in Germany is calling on people to join its global ‘Climate Strike’ tomorrow. “So you want to show that climate protection is still ‘damn important’? Then come along on Friday”, a message on the movement’s social media channels read.

Fridays for Future announced protests in 400 cities and towns all over Germany, from Aachen to Zwickau. On a global level, some 2,500 protests are supposed to take place on Friday. In Germany, the message is “Not one degree more”. This refers to the temperature increase that is being recorded. Each degree (Centigrade) more would have terrifying consequences, including rising water levels and draughts.

A big bicycle rally will take place at 11:00 a.m. CEDT. The first meeting point was supposed to be Brandenburg Gate. Then it was moved to the intersection of Behrenstrasse and Ebertstrasse, behind the U.S. Embassy, which is only a few steps away from the Gate. Another meeting point is Washington Square at Berlin’s central station. In addition, a ‘sit-down strike’ at Brandenburg Gate was announced for 11:00 a.m..

Fridays for Future is usually being supported by organizations like Teachers for Future, ‘Omas gegen Rechts’ (‘Grannies Against Far Right-Wingers’) and ‘Scientists for Future’. There is hardly any movement that has gathered as many supporters as F4F has within two years.

On August 20th, 2018, the Swedish teenager Greta Thunberg refused to go to school on Fridays. Instead, she sat down in front of the Parliament House in Stockholm with her sign saying “Skolstrejk för klimatet”, which is Swedish for “school strike for climate”. Within a few months, the movement she initiated had followers all over the world.

Greta Thunberg, who is 17 by now, has been to Berlin at least twice. She took part in an F4F protest in the German capital on March 29th, 2019. More recently, on August 20th, 2020, she met Angela Merkel with other activists. Luisa-Marie Neubauer is the most famous German F4F personality, but parts of the movement refuse to be represented by famous individuals.

Germany is in the process of an energy transition. In two years from now, the last nuclear power plants are supposed to the shut down for good. By 2038, the last coal-based power stations will be taken off the grid. Last year, 43 percent of Germany’s energy was generated by regenerative sources. By 2030, Germany wants to decrease its CO2 emissions by 55 percent. Not too many countries have climate policies that are this ambitious.

The other day, on September 11th, 2020, Germany’s Commerce Minister Peter Altmaier, a member of Chancellor Angela Merkel’s conservative CDU, held a press conference during which he suddenly appeared greener than the Greens. He was very self-critical about his party’s climate protection policies of the past. Altmaier announced that, as of now, the economy and climate protection policies would be “Siamese twins”.

But Fridays for Future wants more radical steps against climate change. Because of Corona, the movement was rather quiet in the past seven to eight months. That is about to change on Friday. The fact that it will supposedly rain all day long in Berlin is unfortunate for F4F.