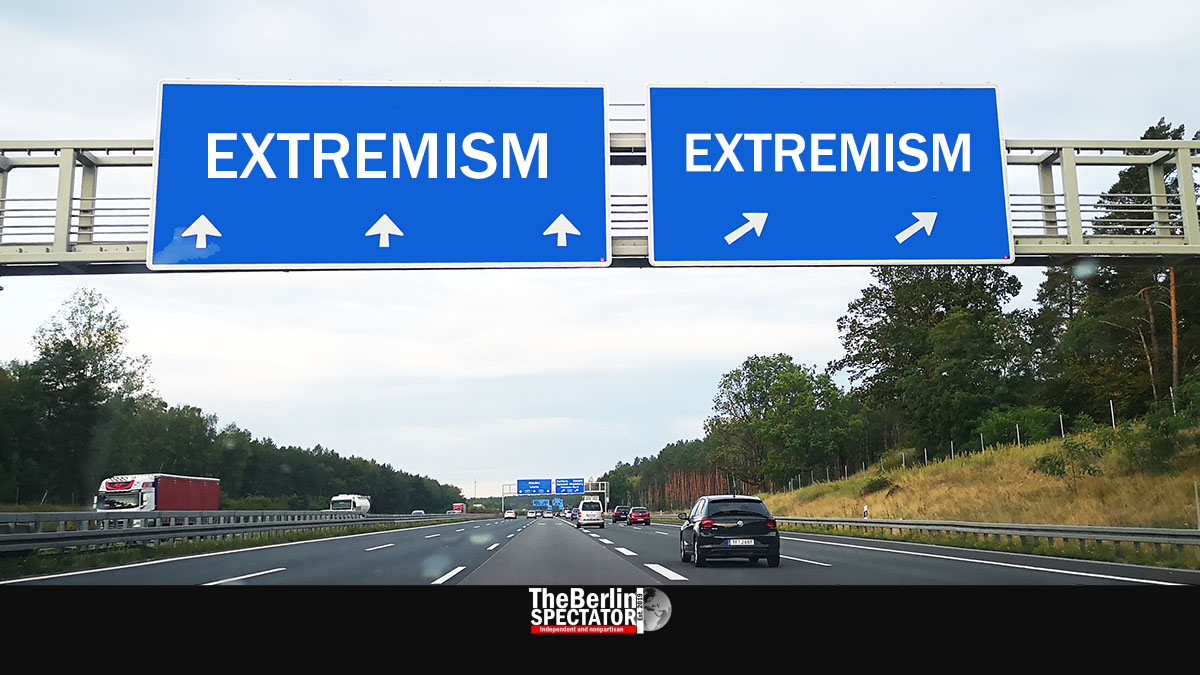 Labeling right-wing extremists as what they are does not trigger too many complaints in Berlin. But when it comes to left-wing radicals, things seem to be different. Why?

Nijmegen, September 25th, 2020 (The Berlin Spectator) — Nazis, self-proclaimed ‘Citizens of the Reich’ and the extremist right-wing party AfD are spreading a lot of hatred. They have their own media channels and use social media a lot. By teaming up with Corona deniers, they recently found new ways to get their message of hate across to even more people.

At the same time, Germany’s and Berlin’s haters are being criticized from all sides, and rightly so. The ‘Antifa’ movement and the entire left stage protests against them all the time. Politicians from all democratic parties, including conservatives, keep on discussing strategies that are supposed to curb right-wing extremism. None of those have worked, so far, but that is another story.

It is safe to say that, in Berlin, there is a huge majority that opposes Nazi ideas, the AfD and comparable parties and movements. Anti-democratic tendencies on the far-right are simply disgusting to most Berliners, including its large international community. Good.

The Other Side of the Spectrum

Things are different when we turn to the other side of the spectrum. For instance, The Berlin Spectator’s recent article about left-wing radicals at Liebigstrasse 34, a former squat project with members who are anti-democratic as well, drew critical reactions from some people. It was the labeling ‘radical’ critics rejected. Why would that be?

Those who attack the police, real estate companies and even an office rented by the Greens, a democratic left-wing party that is part of the government of the city state of Berlin, with stones and color bombs, are left-wing radicals. I picked that label because, like right-wing radicals, they do not accept court decisions, democratic parties or democratically elected politicians. This is what makes them extremists.

No, this is not about hatred towards those ‘activists’ at Liebigstrasse 34, as the ‘White Bloc’ claimed in a reaction to this publication’s article on the matter. But it is about a huge issue defenders of democracy have with the fact that you are fighting “the system”, that you do not accept rules or institutions in this democratic state, and that you use violence. This approach is anti-democratic and radical. Period.

So, you want to keep on living in a building that is not yours? Rent or purchase it. If the owner does not want you there anymore and a court confirms he may have you evicted, pack your bags and go. Look for a place that accepts your terms. In case you do not find any, rethink your terms or found a democratic party, enter the Bundestag and change the laws.

You did not get the label ‘left-wing radical’ because you might have the naive idea that you can live wherever you want, no matter what the property situation is. You got it because you are fighting democracy itself.

Berlin has a majority to the left of the political center. Some individuals who are part of it seem to see revolutionary heroes or freedom fighters when they look at inhabitants of the former squats at Liebigstrasse 34 and Rigaer Strasse 94, those who are anti-democratic. Maybe it has to do with nostalgia. ‘The Revolution Will Not be Televised’, right? “No pasarán” and all of that.

In the 1970s, far too many West German left-wingers sympathized with the domestic, left-wing terror organization ‘Red Army Faction’ (R.A.F.). Today, those “revolutionary” May 1st protests in Berlin draw a lot of acceptance as well, even though they are being staged against the state that gives those protesters freedom of speech, social welfare, free elections and a lot more.

These May 1st protests often become violent because left-wing radicals are part of them, people like the illegal residents at Liebigstrasse 34. Last year on May 1st, it was the police that prevented a violent escalation. And no, this is not about the big, peaceful May 1st protest staged by unions and parties, but about the “revolutionary” one.

So, you are tired of being labeled ‘left-wing radical’? Stop the violence and take a democratic approach. We do not live in Belarus or North Korea. This is not a mafia state on the Balkans or a banana republic either. You live in the Federal Republic of Germany, where everyone has a say as long as their demands and actions are compatible with our democracy.

Part of the left has an issue: It supports anti-democratic movements, dictators who call themselves socialists, like Castro or Ortega, oligarchs like Putin or Lukashenko, leaders and organizations who exploit their people and support terror, such as Abbas and Hamas, and violent, anti-democratic radicals in Germany. Not the label is the issue, but this approach.