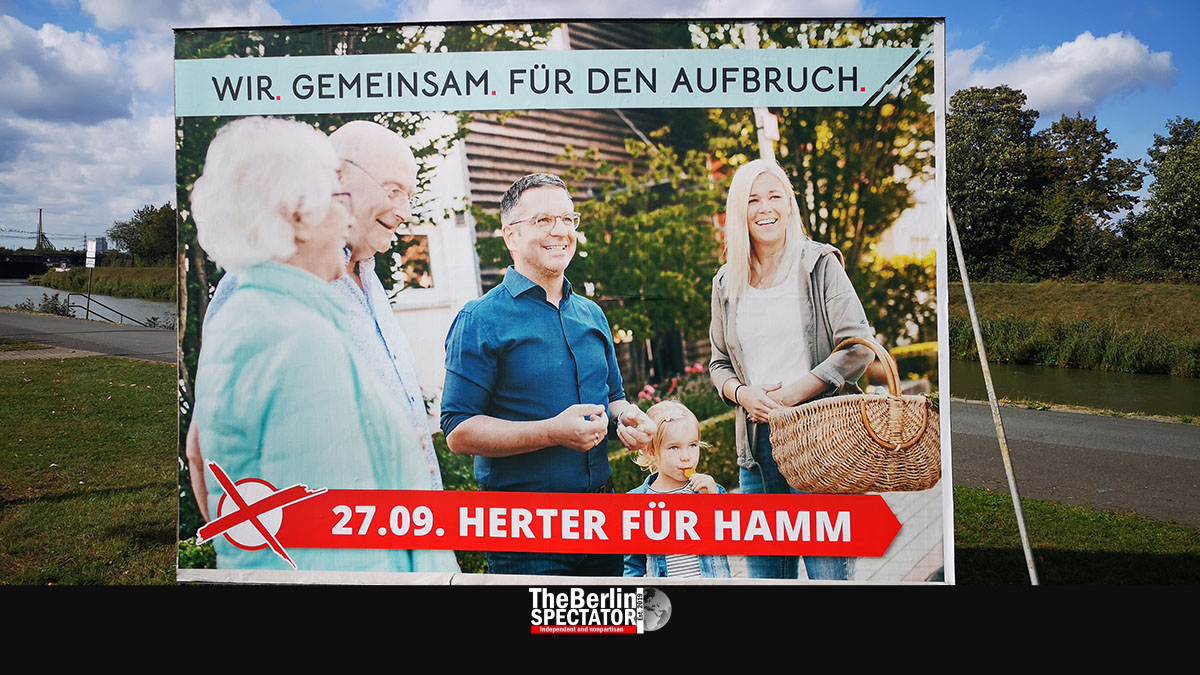 The wind of change is blowing in some cities in North Rhine-Westphalia. Two weeks after the actual local elections in Germany’s largest federal state, some runoffs led to surprises.

Berlin, September 28th, 2020 (The Berlin Spectator) — In Hamm, a city with some 180,000 inhabitants, First Mayor Thomas Hunsteger-Petermann of the conservative CDU needs to vacate his office at city hall after serving for more than 20 years. On election day, two weeks ago, he got beaten by his contender Marc Herter, a member of the center-left SPD, who did not reach the required outright majority though.

That is why a runoff took place on Sunday. Marc Herter got more than 63 percent of the vote. The incumbent, Hunsteger-Petermann ended up with a modest result of approximately 36 percent. The upcoming change at Hamm’s city hall is only one of the good or bad surprises of runoff day, depending on the perspective.

In Hamm, the CDU candidate may have lost but, all in all, the CDU is one of the main winners of the local elections in North Rhine-Westphalia (NRW). The Greens did quite well too. From now on, their candidates will be ruling Aachen and Wuppertal. And in Bonn, where another ‘miracle’ happened. The Green candidate Katja Dörner reached 56 percent.

From New to Old Capital

Last time around, the CDU’s Ashok-Alexander Sridharan had managed to end the SPD’s rule after 21 years. Now he got overtaken himself. Sridharan was the first First Mayor with a migration background in any German city. Katja Dörner was an MP at the Berlin Bundestag for ten years. Now she will obviously be moving from the new to the old capital.

In Dortmund, the SPD candidate Thomas Westphal defended one of his party’s last strongholds. Here, the Social Democrats have ruled for seven decades, and they are in for another five. But gathering majorities will be harder from now one, since the CDU and the Greens have grown stronger here too. Mönchengladbach is another city the SPD managed to take.

Two weeks ago, the Greens had almost doubled their share of votes. The SPD reached only 24, and the CDU 34 percent. Like in many other regions and on the national level, the Social Democrats are shrinking like a t-shirt washed in boiling water.

For instance, the SPD just lost Düsseldorf, NRW’s capital. First Mayor Thomas Geisel will have to pack his things and leave city hall, in order to make room for the CDU’s Stephan Keller, who got 56 percent on Sunday. First Minister Armin Laschet, a CDU member himself, congratulated him by saying he had saved the CDU’s honor. Next door, in Cologne, the independent First Mayor Henriette Raker will remain in office.

Aachen to Have Green Mayor

Armin Laschet’s home town, Aachen, will have a Green First Mayor. Sibylle Keupen won the runoff against the CDU’s Harald Baal with 67 percent. Wuppertal will now be governed by Uwe Schneidewind, who was the candidate for both the Greens and the CDU. It was a close race, but First Mayor Andreas Mucke of the SPD just lost his job.

In Bielefeld, the SPD candidate Pit Clausen will continue to rule the city. Michaela Eislöffel, another candidate for both the CDU and the Greens, won against Mayor Heidinger of the SPD. The CDU candidates won in Münster, Meerbusch, Moers, Ratingen and Kleve. In Leverkusen, First Mayor Uwe Richrath of the SPD stays.