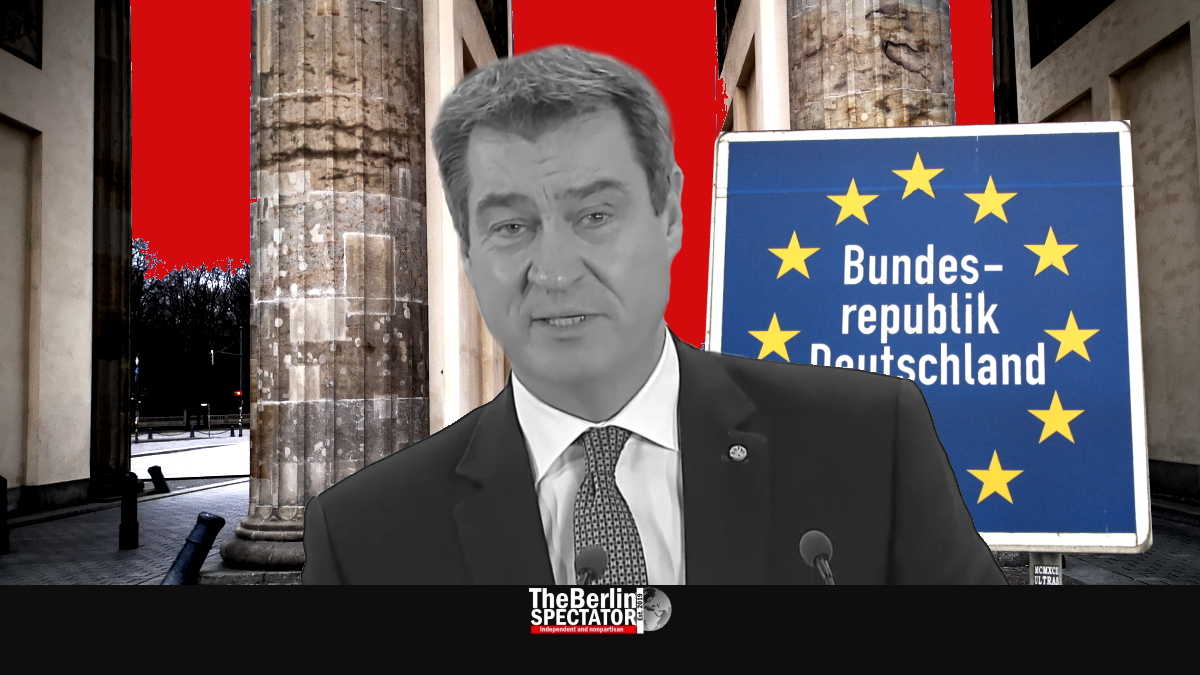 Markus Söder, the First Minister of Bavaria, wants a Corona traffic light warning system. His suggestions will be discussed with Chancellor Merkel tomorrow. In the meantime, soldiers are helping Berlin cope with Corona.

Berlin, September 28th, 2020 (The Berlin Spectator) — Ahead of the online discussions on Corona Chancellor Angela Merkel and the First Ministers from Germany’s sixteen federal states are scheduled to hold on Tuesday, one ‘territorial prince’ may already have disclosed part of the outcome. Again it was Markus Söder, who rules Bavaria with the ‘Freie Wähler’ party.

Söder, who may want to succeed Angela Merkel at the Chancellery next year, usually spreads the agenda all over the world just before those regular meetings take place. This time, he demanded a nationwide traffic light warning system for Corona, in an interview with the ‘Süddeutsche Zeitung’ daily.

If he gets his way, the ‘Corona traffic light’ will be a “binding, proportional, reliable guideline for the winter”. Söder told the paper, the traffic light needed to switch to yellow when the Seven Day Incidence Number reached 35. That number shows how many new infections there are in a city, county or region per 100,000 inhabitants within seven days.

Once that traffic light was yellow, certain measures could be taken, First Minister Söder said, including Corona tests for high risk population groups, such as the elderly, soccer matches without on-site audiences and mandatory masks at school for grades 5 to 13. Then, once the Incidence Number hits 50, the measures should be tightened further, according to Söder’s idea.

Those last resort measures would include a decrease of the maximum number of people at private events, a mandatory mask rule in public areas that are crowded, alcohol bans and curfews. Söder also said he favored clear rules regarding the measures that needed to be taken when the numbers reached a certain level.

By now, there have been more than a million Corona-related deaths in the world. In Germany, their number is relatively low, in comparison. As of Monday morning, a total of 9,464 persons had died of COVID-19 since the pandemic hit Europe in January. The total number of Corona infections in the Federal Republic of Germany is 286,339 (Sept. 28th, 2020, 08:17 a.m. CEDT).

In some other European countries, the situation is more alarming, for instance in the Netherlands. There, the number of infections and deaths is increasing rapidly. As many as 2,995 new Corona cases were registered there on Sunday. In Spain, France, Luxemburg, Austria and Czechia, things do not look good either.

Germany has Corona hotspots as well. The city of Hamm just forbade private parties, after a Wedding with many guests caused a major Corona outbreak. After a family celebration in Bielefeld, 900 persons are reportedly in quarantine. The same applies to more than 5,000 schoolkids in all of Germany.

In Berlin, which is another Corona hotspot, Germany’s armed forces are supporting the health authorities. ‘Bundeswehr’ Soldiers are helping to track down contact persons of infected individuals. According to the ‘Berliner Morgenpost’ daily, 60 soldiers are already working. As many as 180 additional ones are expected in the German capital.

The ‘Morgenpost’ also reports, one Berlin district with high Corona numbers, namely ‘Friedrichshain-Kreuzberg’ did not want support from soldiers. This might be an ideological issue.