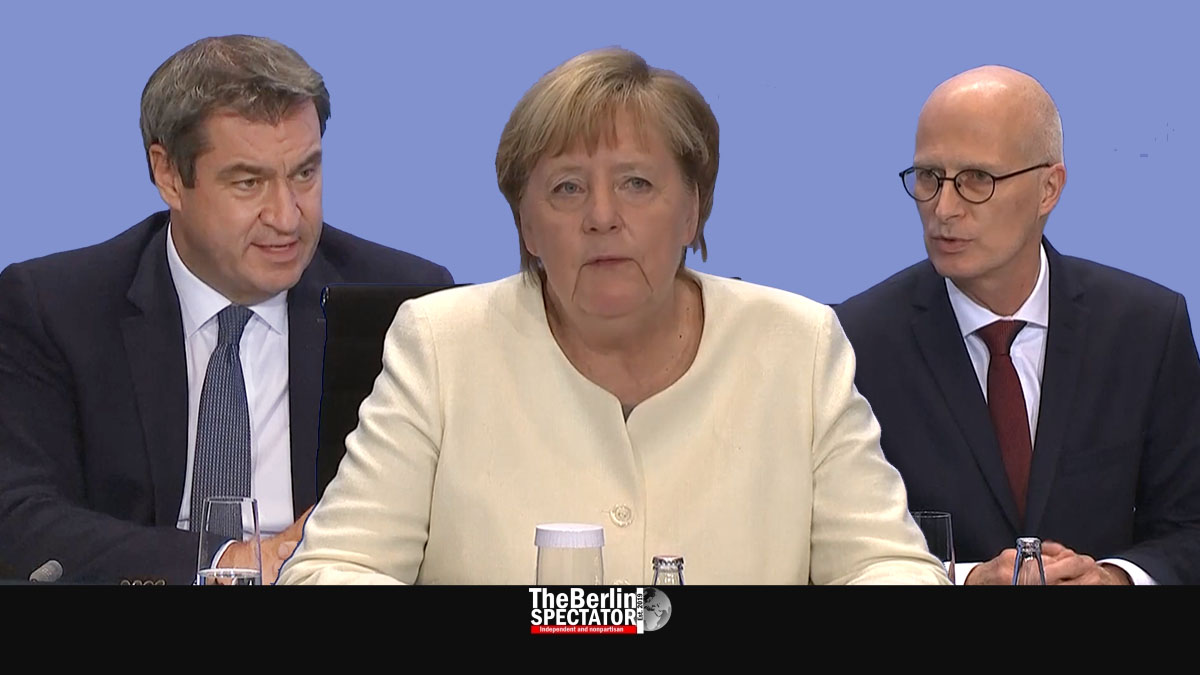 Chancellor Angela Merkel and the First Ministers took some decisions regarding their strategy in the fight against Corona in Berlin on Tuesday. The German head of government did not manage to have all of her suggestions approved.

Berlin, September 29th, 2020 (The Berlin Spectator) — In Berlin, Mrs. Merkel and the First Ministers agreed to what they called a ‘hotspot strategy’. What this means is that they believe it makes sense to react to regional or local Corona outbreaks whenever necessary. But the participants of the online discussion also want to implement mutual, nationwide rules the details of which may vary from state to state.

After the video meeting, Mrs. Merkel said the increasing number of Corona infections was a reason for worries. She explained a projection she had first mentioned during a board meeting of her party, the CDU, on Monday, by saying the number of new infections per day in Germany had doubled three times since July.

Breaking infection chains was important, Angela Merkel said. She mentioned the fact that Germany’s armed forces, the Bundeswehr, was already in the process of helping health authorities in Munich and Berlin, because they could not manage to track down all contact persons of infected individuals on their own anymore.

Merkel had wanted a nationwide limit regarding the number of guests of private events such as parties. Since there was no agreement on this aspect, there now is a recommendation to limit that number to 25. Events in rented or public rooms will be limited to 50 guests when the Incidence Number in the county or city it takes place in exceeds 35.

All over Germany, guests at restaurants, pubs or cafés who do not fill in the mandatory contact lists accurately, will be fined. This is one of the results of the meeting. Those lists are being used to find everyone in case of local Corona outbreaks. While the minimum fine is 50 Euro (59 U.S. Dollars or 46 Pounds Sterling), it can be a lot higher, depending on the federal state. Chancellor Merkel said, leaving names such as ‘Donald Duck’ and false addresses was not a trivial offense. This crisis was still about life and death.

Asked about a theoretical abuse of contact lists that were accessible to other restaurant guests as well, Angela Merkel said this issue could be handled by the restaurant or pub owners. She stated she had talked about the problem with the First Ministers. A new law for the protection of entries on Corona lists was not necessary or wanted.

She also said this was not the time for an easing of any Corona restrictions. Preventing another “shutdown” was important right now. People needed to follow the rules by keeping their distance, washing their hands on a regular basis and by wearing masks. She recommended ventilating private and public rooms often and downloading Germany’s ‘Corona App’. Some 18 million Germans have already downloaded it, in spite of reported issues.

At the same press conference in Berlin, Bavaria’s First Minister Markus Söder said it was not advisable to take trips abroad during the upcoming fall vacations. People could spend their holidays “in beautiful Germany” instead. Jobs, kindergartens and schools were far more important, Söder stated.

He also said there needed to be “more masks, less parties and less alcohol.” Neither he nor the Chancellor or other First Ministers wanted to keep people from having a good time. But there were necessities and priorities right now.