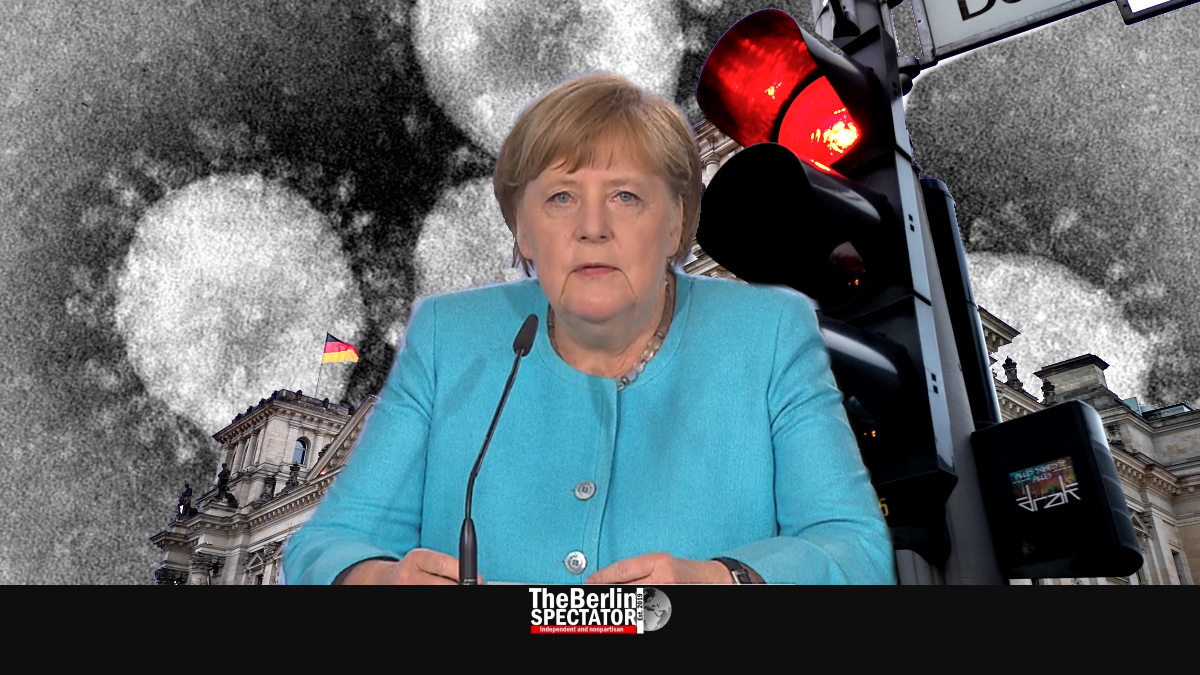 Because of the rising number of Corona infections in Germany, Chancellor Angela Merkel will be in a video conference with the First Ministers today. Coming to an agreement on new measures will be difficult.

Berlin, September 29th, 2020 (The Berlin Spectator) — Chancellor Angela Merkel is determined to fight the Corona pandemic with stricter rules, ahead of the upcoming winter. During an online board meeting of her conservative party CDU, she reportedly said that if the numbers in Germany continued developing the way they were right now, there would be 19,200 new infections per day by Christmas.

Schools and the Economy are Priorities

The high number Merkel mentioned is based on a projection that grosses up Corona figures based on the growth since last week. The centers of infection in Germany needed to be dealt with, Mrs. Merkel told her colleagues during the meeting. Later today, she will be discussing Corona with the First Ministers, First Mayors and one Governing Mayor from Germany’s sixteen federal states.

Angela Merkel says that, out of all aspects, kindergartens, schools and the economy were the main priorities. As opposed to some First Ministers, especially in the eastern part of the country, the Chancellor has always been a proponent of stricter Corona rules. An endless discussion about the right approach to take has been going on since Corona first hit Germany in January.

According to several German-language media, Merkel’s government wants to limit the number of guests at private parties to 25, and to 50 at comparable events in public areas. Stricter rules are supposed to be introduced in areas with Seven Day Incidence Numbers that exceed 50. That number shows how many new Corona infections there are per day, on average, for a week. In several German regions, including Berlin’s ‘Mitte’ district, the Incidence Numbers are already higher than 50.

Some federal states have different ideas about what should happen — or not happen. There are those do not want the authorities to limit private parties at all, others feel the Corona rules should be eased instead of tightened, on their turf. And there are First Ministers who reject any automatism based on numbers. An intensive discussion is a foregone conclusion.

On Monday, Bavaria’s First Minister Markus Söder had demanded a nationwide ‘Corona traffic light’ that can trigger measures once the number of new infections increases. Federal states like Berlin and Baden-Württemberg already have ‘Corona traffic lights’, but there are big differences what the details are concerned.

Another aspect that will be discussed is alcohol. The federal government wants the sale of alcoholic beverages to be limited in areas with high Corona numbers. In bars, restaurants and cafés, customers who write fake names and addresses on the mandatory Corona contact lists are supposed to be fined, according to the ideas of some discussion participants.

Because of the rising number of new Corona infections, tracking down all contact persons has become a mission impossible. That is why ‘Bundeswehr’ soldiers are helping the health authorities in Berlin and Munich. Germany’s armed forces had supported cities before, during the first part of the Corona crisis.