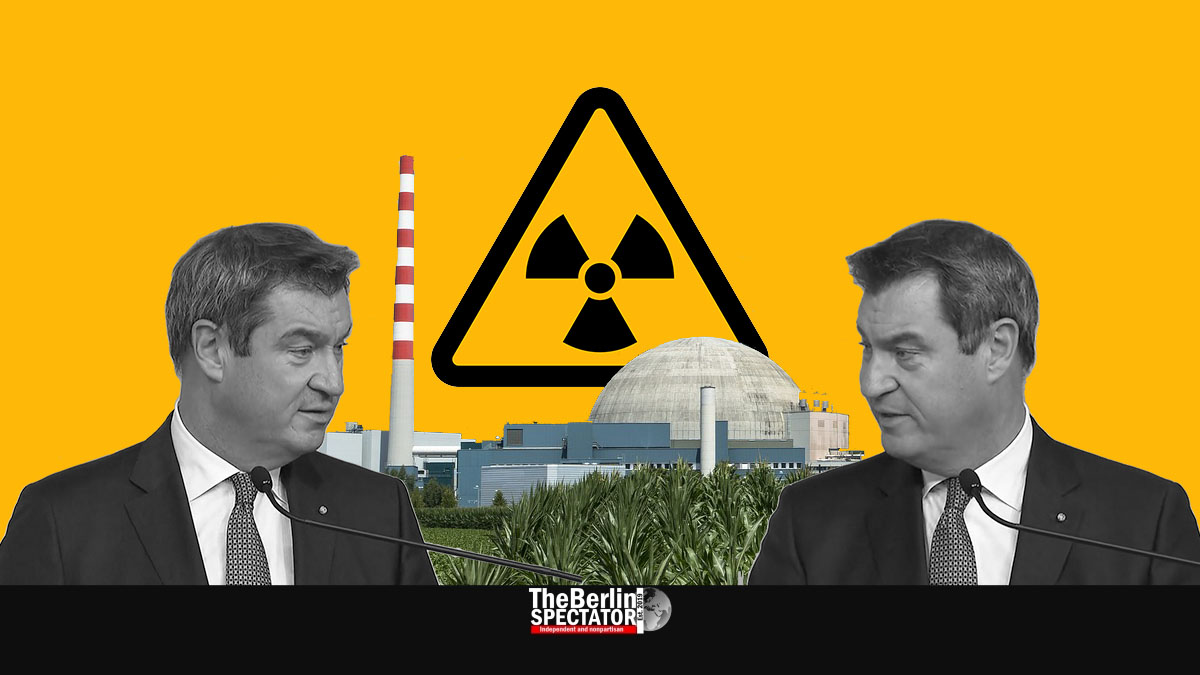 We should all be glad most of yesterday’s nuclear energy proponents in Germany have changed their minds by now. But the fact that some are trying to escape from their responsibility in regard to nuclear waste is reprehensible.

Berlin, September 29th, 2020 (The Berlin Spectator) — On Monday, the First Minister of Bavaria, Markus Söder, explained how his federal state was “unsuitable” for a permanent disposal site for all the nuclear waste all German nuclear power plants have produced since the first NPP, a reactor in Kahl, was added to the electricity grid in February of 1962.

While he did so, Söder talked into a microphone. Microphones need power. A share of 12.3 percent of it was generated by nuclear energy, a source Germany will dump completely in 2022. It is also a source Markus Söder’s main hero, the late Franz-Josef Strauss, and other conservatives in Germany, but also Social Democrats, pushed as hard as they could, for decades.

Starting in 1955, Strauss was in charge of nuclear energy as Minister for Nuclear Power. Throughout his political career, also as one of Söder’s predecessors as First Minister of Bavaria, Strauss did anything he could for the extension of Germany’s network of NPPs. Today, his heir does not want the nuclear waste the reactors generated. He is trying to exclude his front yard from the search for a permanent nuclear waste site.

Nuclear waste is an aspect the ‘No Nukes’ movement, which was affronted by ultra-conservatives like Strauss in the 1970s and 80s, warned the nation of for a long time. Opponents of nuclear energy, including scientists, kept on saying the nuclear waste issue had not been resolved. Well, it still hasn’t.

Four and a Half Meltdowns

They said there would be a core meltdown every one million years. Today we know this was inaccurate as well. Since the reactor in Three Mile Island almost blew in 1979, there have been four actual meltdowns. The Chernobyl disaster spread radioactivity all over Europe and beyond. During the Fukushima Daiichi disaster, plutonium got into the Pacific Ocean.

The proponents of nuclear power never said they were wrong back then, but they know. A moderate CDU member by the name of Angela Merkel, whose profession is Chancellor of the Federal Republic of Germany, switched back and forth between being a nuclear power proponent and opponent several times over the years.

What Could Go Wrong?

In the first grand coalition she headed, she agreed to a nuclear power phase-out. Then, when she led a coalition with the liberal FDP, she threw that position overboard and became a proponent again. After watching television news on March 11th, 2011, the day of the Fukushima triple meltdown, she changed her mind yet again. Merkel, the former scientist, suddenly did not want an uncontrollable, dangerous energy source anymore. Good! But the waste issue is still on the table.

Storing nuclear waste? What could go wrong? Well, how about the Asse case in Lower Saxony? Countless barrels of nuclear waste were stored in the former salt mine, which was supposed to be as safe as nuclear power itself. Then, 3,400 gallons of water per day started to drown the mine, with the radioactive trash inside. The issue cold lead to a contamination of the ground water.

What am I saying by mentioning all of this? The former nuclear power proponents, their heirs and biggest fans, including Mr. Söder, should not try to escape from their responsibility. Besides, if nuclear energy is so safe, and if the waste aspect is as easy to handle as they said it was, some decades ago, they should be the first to open their front yard in case it turns out to be the best choice for a disposal site. Amen.