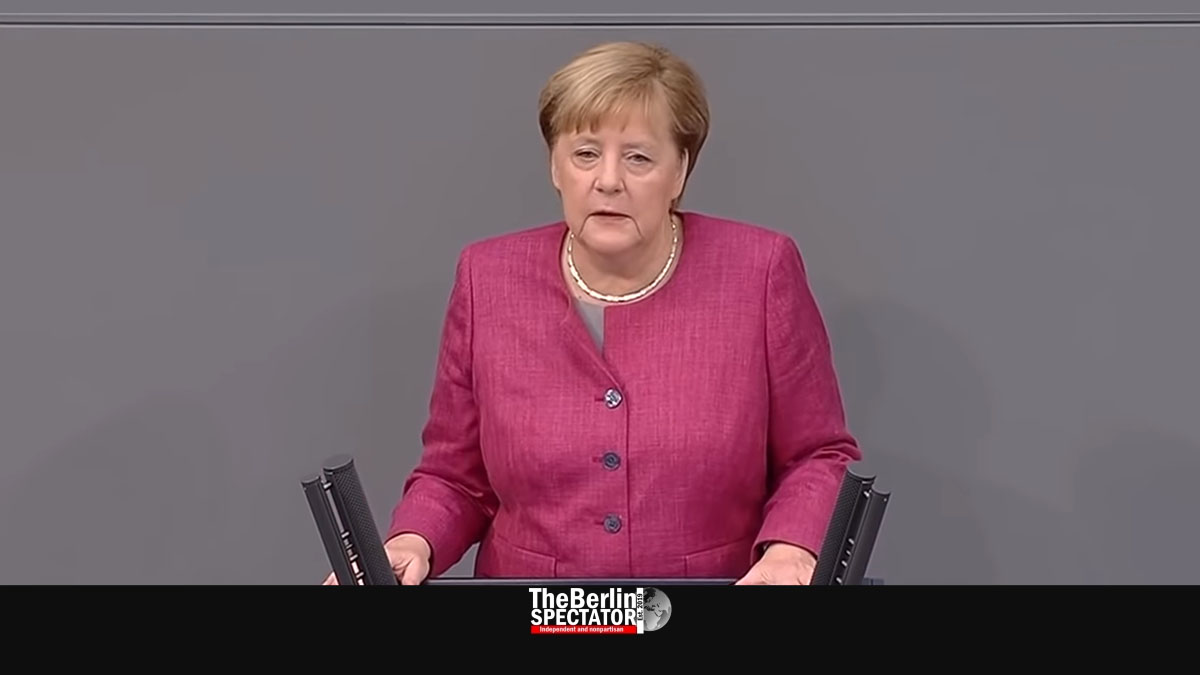 At the Berlin Bundestag, Germany’s Chancellor Angela Merkel said the Corona pandemic was a long crisis. “Difficult times lie ahead”, she stated. But she also predicted there would be an end to Corona.

Berlin, October 1st, 2020 (The Berlin Spectator) — Angela Merkel addressed the MPs at the Bundestag and the entire nation when she said that “life as we knew it will be back”. Families would celebrate again, and clubs, theaters and soccer stadiums would be crowded. “What a joy that will be”, the Chancellor said.

By saying so, Mrs. Merkel gave many Germans hope in a crisis that has lasted eight months, so far, and which might not be over until late next year. She also called on everyone to follow the Corona rules. At this stage, there was less caution, Merkel stated. “Citizens in this society” needed to care about each other more again.

Everyone was longing for closeness, touch and being together. “I feel that way myself”, Germany’s head of government said. “But at the moment we are risking everything we have achieved in the past months.” A “difficult phase” was coming up now.

Nationwide Lockdown to be Avoided

The number of new infections was already increasing, Mrs. Merkel told the nation. She also said the latest decisions that had been taken with the federal states were the right ones, for that reason. On Tuesday, she and the First Ministers had agreed on a “hotspot strategy“, meaning Corona outbreaks are supposed to be fought locally. Another nationwide lockdown is something the government and the states intend to avoid, whatever it takes.

Everyone needed to be patient and reasonable. The behavior of every single person mattered here, Angela Merkel said. The Chancellor’s speech was interrupted by the applause of most parliamentary groups.

Only the MPs of the extremist right-wing ‘AfD’ did not applaud. Its floor leader Alice Weidel accused the government of having failed. Its “overblown measures” had turned the Corona crisis into the worst recession in Germany’s history”, she said. “Stop causing panic!”, Mrs. Weidel told the Chancellor.

For the FDP, a small party that calls itself liberal, its chairman Christian Lindner demanded “more tangible measures” against Corona. “Back-of-the-envelope calculations with dramatic numbers do not help us”, Lindner said.

On Thursday in the early morning, the total number of Corona infections in Germany since the crisis commenced in January stood at 292,913. Since Wednesday morning, 2,442 cases needed to be added. The increase per day is now eight times higher than it was in June and July. There have been 9,495 Corona-related deaths in Germany so far.