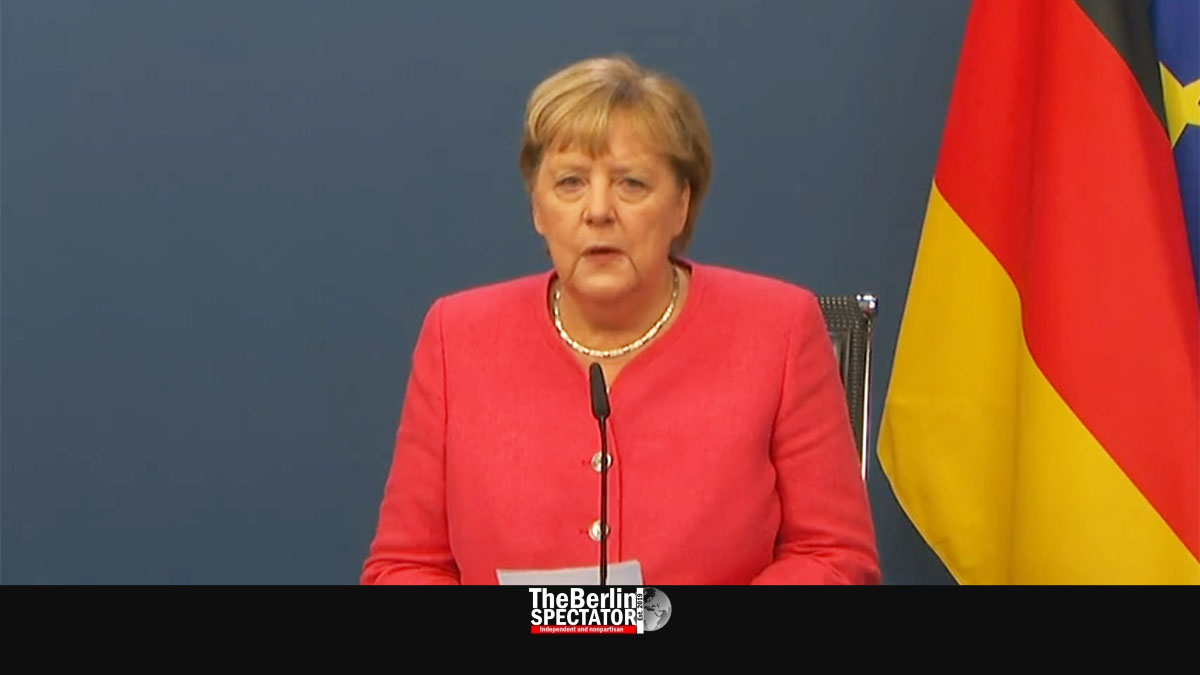 Since Friday morning, Angela Merkel has sent recovery wishes to Donald Trump twice. According to a government spokeslady, there has not been direct communication between the two heads of government since the news about Trump’s Corona infection broke.

Berlin, October 2nd, 2020 (The Berlin Spectator) — During a press conference in Brussels, where Chancellor Merkel is part of the E.U. summit, she said she wished U.S. President Donald Trump and his wife Melania “a speedy recovery”. It was important to her to express those wishes, she stated.

Before, her spokesman Steffen Seibert had already spread her first statement. “I am sending Donald and Melania Trump good wishes. I hope, they will ride out their Corona infection well and be healthy again soon”, it said. Angela Merkel was not the only European head of government to send good wishes to Washington D.C..

According to spokeslady Ulrike Demmer, there has not been any direct communication between Chancellor Merkel and President Trump since his Corona infection hit the news channels.

The German government also said the Corona protection measures for Angela Merkel and her ministers had not been tightened since the news from America had broken. They would only undergo Corona testing when there were good reasons.

In London, Prime Minister Boris Johnson tweeted good wishes to Trump as well. “My best wishes to President Trump and the First Lady. Hope they both have a speedy recovery from Coronavirus”, he said.

“Like millions of Israelis, Sara and I are thinking of President Donald Trump and First Lady Melania Trump”, Israel’s Prime Minister Benjamin Netanyahu wrote. He said he wished “our friends a full and speedy recovery.”

The E.U.’s Council President Charles Michel sent recovery wishes too. So did the French government. In this case, the message from the Elysée Palace contained criticism. Government spokesman Gabriel Attal stated, the Coronavirus did not spare individuals who had been sceptics at first. He also sent good wishes to Trump.

The transatlantic relations have deteriorated substantially since Donald Trump became President. He keeps on criticizing Germany and pulled out 10,000 out of the 35,000 American soldiers stationed here.

On a television show in early June, during the demonstrations against racism in the U.S. police, Angela Merkel slammed Trump without mentioning his name, by saying politics meant bringing people together and conciliating them.

Back then, she said she hoped for a continuation of the peaceful protests. When she was asked whether she trusted the American President, she paused for a moment, before saying this: “I cooperate with the elected presidents in the world. This, of course, includes the American one.” The Chancellor could hardly have been more clear.

Earlier, in May, Angela Merkel refused to go to Camp David (Maryland) for a G7 summit. This did not go down too well at the White House. Neither does the North Stream 2 pipeline project. The Germans do not like the fact that Trump does not believe in climate change. These are only some of the arguments between the Chancellery and the Trump White House.