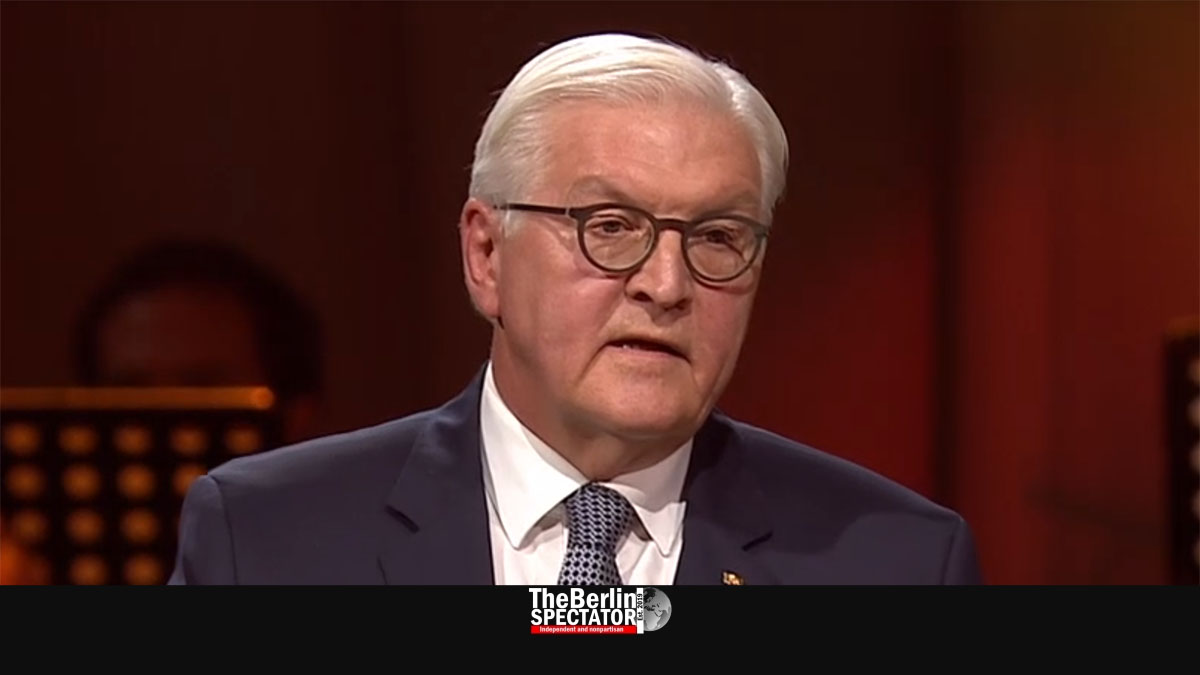 In Potsdam, Germany celebrated the 30th anniversary of its reunification today. President Steinmeier, First Minister Woidke and contemporary witnesses spoke to the nation.

Berlin, October 3rd, 2020 (The Berlin Spectator) — At today’s anniversary event, Germany’s President Frank-Walter Steinmeier thanked the former head of state of the Soviet Union, Michail Gorbachev, the United States of America and the European partners for supporting the reunification thirty years ago.

Steinmeier said, 30 years later, there were still ‘Ossis’, eastern Germans, and ‘Wessis’, western Germans, but this distinction was not defining anymore today. The task was to work together, for instance on reorganizing the peaceful togetherness in this country. “Unity is unity in freedom and diversity”, Steinmeier stated. “It has to be defined in a European way. This is the path we should keep on walking.”

‘We Are Farther than We Think’

Thirty years after the reunification, “we have not come as far as we should have, but we are farther than we think”, the President told the Germans. He did mention differences that still exist, for instance what salaries are concerned. There were not enough companies headquartered in the country’s eastern part.

But it was not all about economy data or pay slips, but also about growing closer together humanly, Steinmeier said in Potsdam. It was about getting to know each other, each other’s regions and stories. While virtually all eastern Germans had been to the western part of Germany, one in five western Germans had not visited the east.

President Steinmeier said there should be a memorial of the peaceful revolution that had led to Germany’s reunification. According to him, it needs be built in the city center of Berlin.

Before Steinmeier held his speech, Brandenburg’s First Minister Dietmar Woidke said Germany’s reunification was a perpetual process. It had been a big success, but also needed to be seen in a critical way. Regresses, defeats and mistakes had been part of it too. “But we learned from them”, Woidke stated.

He pleaded for more self-confidence in the eastern part of Germany as well. “There is a lot to learn from the east”, Woidke said. All in all, there was a lot of work ahead, including dealing with the consequences of the Corona pandemic and the progressing division in the world. Germany needed to remain a solidary country, Dietmar Woidke said at the event in Potsdam. “Whenever we keep together in Germany, we do well.”

The festivities in Potsdam included on-stage interviews with the first ‘German unity baby’, a lady who was born on October 3rd, 1990, a 60-year-old eastern German rock star, and a 90-year-old former federal minister wo was part of some reunification talks thirty years ago, conducted by Günther Jauch, one of the most popular TV presenters in Germany.

On the eve of the 30th anniversary, Berlin’s Governing Mayor Michael Müller said the reunification was a reason to celebrate, especially these days. It was important to remember what the Germans had established, namely a peaceful, undivided and unified country that had overcome new challenges many times. Also it had stood the test as a democracy and a nation of law.

“Together we will make sure our country remains worth living in for all who live and work here”, Müller stated. “For new generations and the 21st century, we want to secure a good, free and democratic future. This includes coming to terms with our history, as well as looking at what we have achieved and what we still want to achieve.”

Today’s free and democratic Germany orientated itself by humanitarian values, it confronted challenges together and kept on achieving the best for the people, Müller stated. The power and competence of its federalism had become obvious because of the way the Corona crisis and the uncertainties connected to the pandemic were being dealt with mutually.

In Potsdam, Germany’s federal states and main institutions had presented themselves to the public in glass boxes at the ‘Unity Expo’ for a month. It will close on Sunday, October 4th. Potsdam is where the anniversary festivities took place because the federal state of Brandenburg holds the Bundesrat presidency right now.