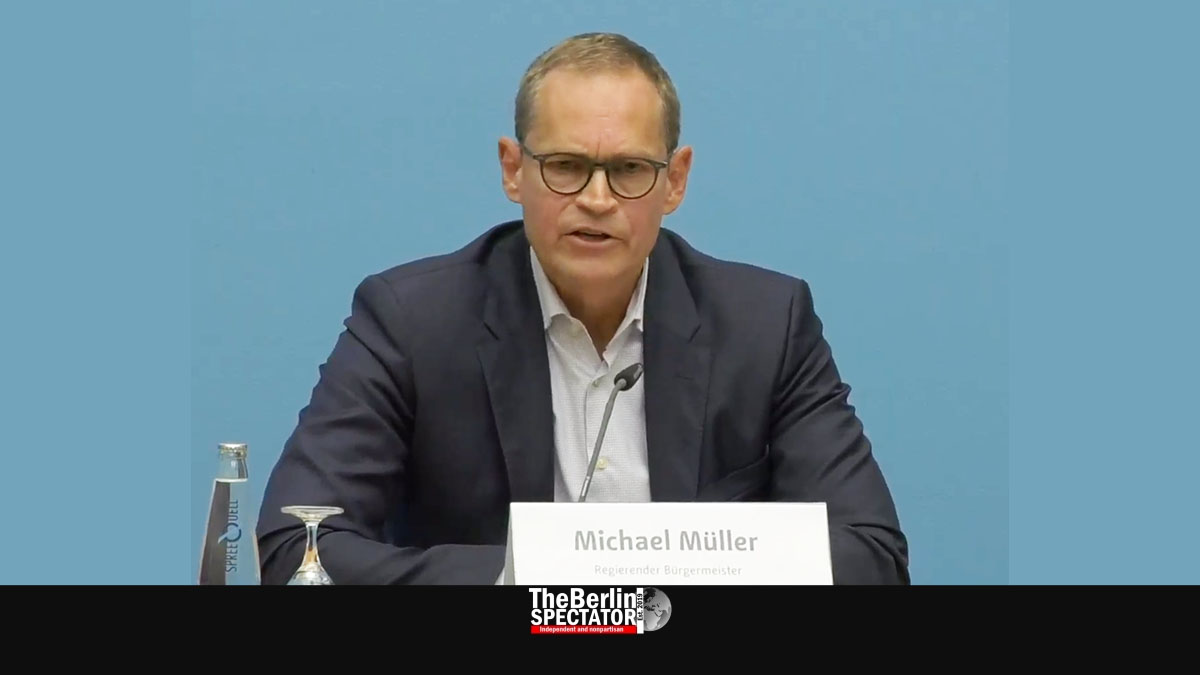 Berlin’s Governing Mayor Michael Müller and the Senate pulled the emergency break. A semi-curfew will be in place starting this coming Saturday.

Berlin, October 6th, 2020 (The Berlin Spectator) — Because of the alarming spread of the Coronavirus in Berlin, the Senate just imposed something like a curfew on the German capital. Starting on Saturday, October 10th, 2020, restaurants, bars and similar businesses have to close from 11:00 p.m. to 6:00 a.m.. An alcohol ban will be in place during those hours.

Gas stations may not sell alcoholic beverages either during those same hours. Convenient stores, known as ‘Spätis’ in Berlin’, need to close during the same hours. Governing Mayor Müller, Justice Senator Dirk Behrendt and Culture Senator Klaus Lederer said police and other authorities would check whether those new rules would be followed and fine people who ignored them. They also asked all Berliners to act in a responsible way and to help bring the Corona numbers down.

Private parties are restricted too. From Saturday, up to 10 persons might take part in those. So far, the maximum number of participants had been 25. Outdoors, up to five persons from different households, or an unlimited number of people from up to two households, may be together between 11:00 p.m. and 6:00 a.m.. This rule is supposed to end end illegal parties in Berlin parks which have been taking place for months, in spite of countless warnings.

The new measures are temporary. They will be in place until October 31st, 2020 or until further notice. Senator Behrendt stated, everyone needed to adhere to the new restrictions in order to make sure there would not be even stricter ones later.

Klaus Lederer said that Berlin would help pub owners financially. Indeed, the curfew will affect them most because their income depends on selling alcoholic drinks. In the case of restaurants, the problem was not quite as grave because they were usually done by 11:00 p.m. anyway, Lederer said.

Nine out of twelve Berlin districts had reported elevated to extremely high Seven Day Incidence Numbers earlier on Tuesday. For the entire city, that number increased to 44.2. Some 300 new Corona infections per day are being registered these days. On Tuesday, the exact number was 288. The Reproduction Number in Berlin is increasing as well.

The city state of Berlin has a Corona alarm system consisting of three traffic lights. Two of those, the ones for the Incidence Number and the Reproduction Number, are now on red. According to the Charité hospital, the number of Corona patients it is treating is increasing. The same applies to the number of ICU patients who need to be put on respirators.

‘Calming Down’ the City

Governing Mayor Michael Müller rejected criticism recently expressed by Germany’s Health Minister Jens Spahn, who had said Berlin needed to do more. Specifically he had complained about having been the only guest in a Berlin restaurant who had worn a mask when he had entered.

Müller was visibly angry when he stated Minister Spahn should have helped instead of complaining. He should have contacted the Berlin authorities about those issues at the restaurant, Müller said. He also slammed federal states like Schleswig-Holstein which are sending visitors from some Berlin districts into quarantine.

“I am asking everyone for their understanding and help”, the Governing Mayor said. A further escalation needed to be avoided. Senator Leder said the situation in Berlin was serious. The city needed to be calmed down now. Its inhabitants needed to disperse.