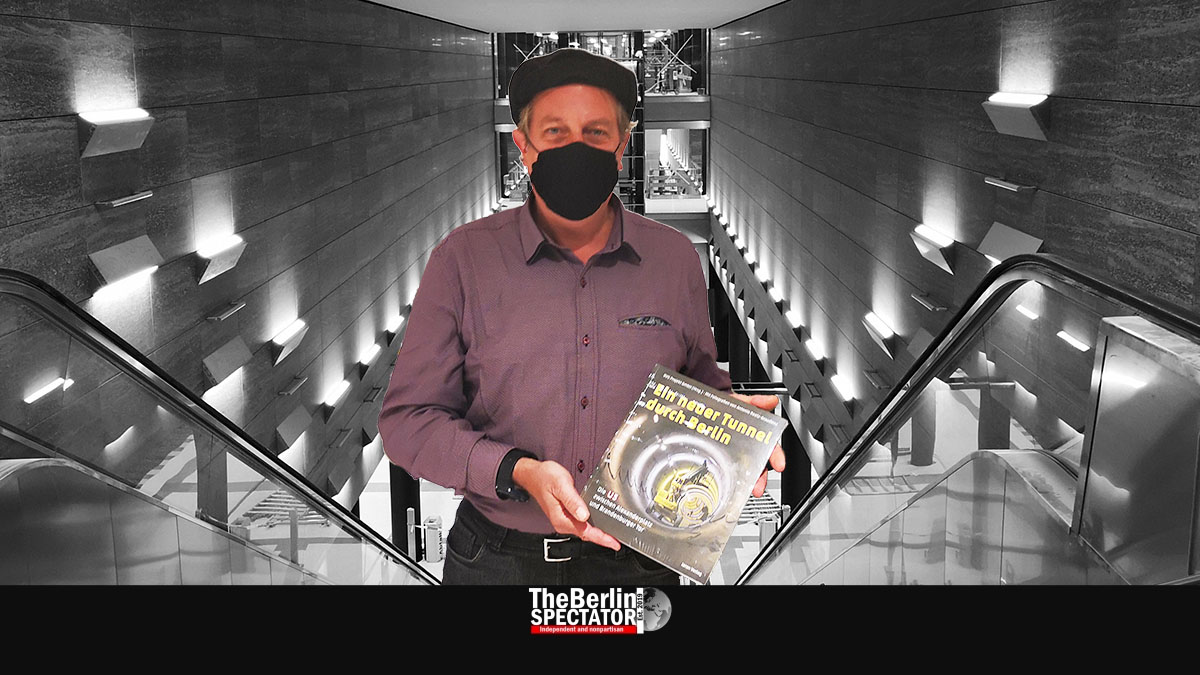 On December 4th, 2020, Berlin will inaugurate the extended U5 line in its ‘U-Bahn’ train system. Technically, the project was rather complicated. The best part is that the construction project’s chief engineer is a photographer as well.

Berlin, October 7th, 2020 (The Berlin Spectator) — Berlin’s new BER Airport is about to open, with a delay of almost nine years. The airport may not be the most sensational construction project to be inaugurated this year though. When it was supposed to open in 2012, construction manager Antonio Reetz-Graudenz and his big team started digging into the ground like moles, in order to work on Berlin’s U5 train line extension. Now, both projects are completed.

The difference is that BER Airport’s train tunnel in its basement is not nearly as attractive as the U5 tunnel with its three beautiful stations, and that the U5 does not have a runway. Besides, the ‘U-Bahn’ train tunnel was a lot cheaper. It cost 525 million Euro (589 million U.S. Dollars or 477 million Pounds Sterling), while the airport swallowed about twelve times as much. But this is like comparing apples to oranges. Let’s stay with the oranges.

From the moment ‘Bärlinde’, a giant tunnel digging machine, started eating the mud underneath the German capital, Antonio Reetz-Graudenz was not only in charge of the construction, but he documented the entire endeavor with his camera. The tens of thousands of photos he shot fill several hard drives. And they are already historic.

One hundred and eighty photos were put together in a book that was just published. Its title: ‘Ein neuer Tunnel durch Berlin‘ (publisher: BVG Projekt GmbH, publishing house: Jaron Verlag, price: 20 Euro). The information the book provides about the giant project was contributed by Stephanie Niehoff. While the text may be in German, those photos will be understood by everyone.

The book tells the story of an adventure in excellent photos. It shows how the foundation of the medieval predecessor of Red City Hall was found and protected during the construction process. Antonio Reetz-Graudenz documented how a giant ice block needed to be created in order to make the construction of the new station ‘Museumsinsel’ possible at all.

The Mess at ‘Unter den Linden’

The photos show how ‘Unter den Linden’, a historic street that connects the eastern city center to Brandenburg Gate, was turned into a huge mess, because there was no other way to build the ‘Unter den Linden’ station that connects the U5 and U6 lines. On top of it all, Reetz-Graudenz used his camera when the existing part of the tunnel, dug some 100 years ago, was laid open beneath Red City Hall.

The new tunnel should not really be compared to BER Airport because building the ‘U-Bahn’ extension was almost as difficult as erecting the Pyramids of Gizeh or those in Teotihuacán. And how about the Mar-a-Lago? Besides, the airport builders did not publish nice books with brilliant photos of the construction process. Well, neither did the Egyptians and Aztecs.