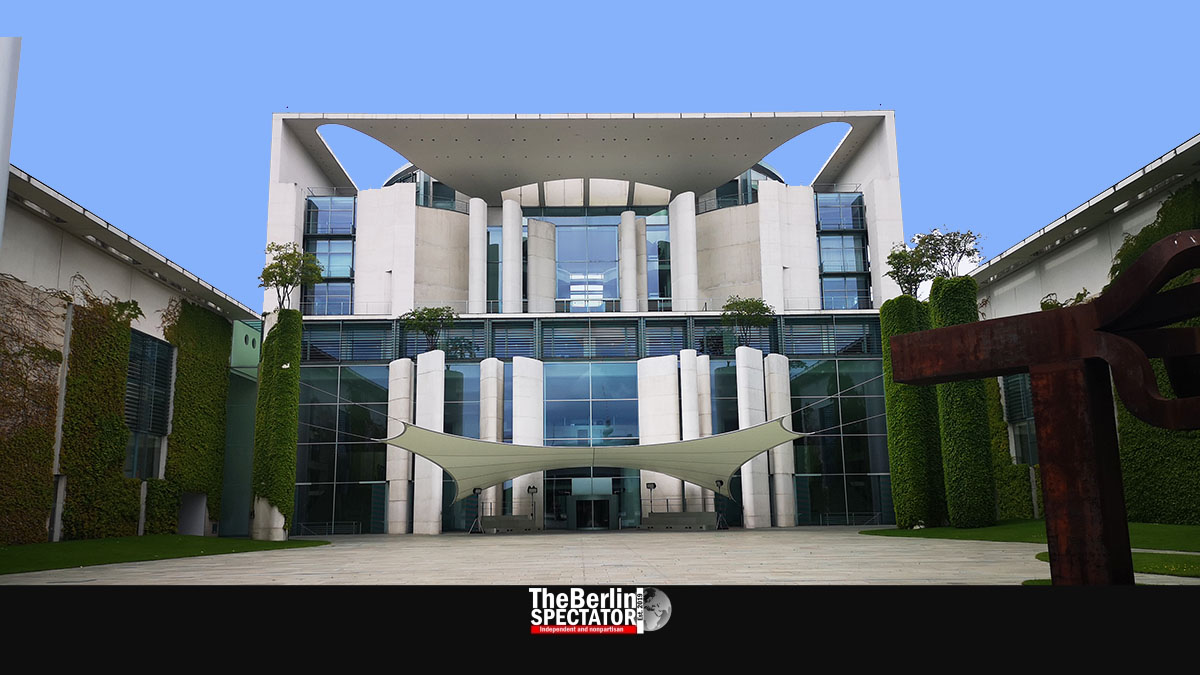 The Federal Audit Office is alarmed. According to the authority, the costs for the planned extension of the Chancellery in Berlin are exploding.

Berlin, October 8th, 2020 (The Berlin Spectator) — The reunification of Germany and the government’s return to Berlin were sealed during Chancellor Helmut Kohl’s term. Axel Schultes and Charlotte Frank, two Berlin architects, were commissioned to design a new Chancellery at the Spree riverbank. Once it was all approved, the construction began in 1997.

By the time the building was ready in May of 2001, Gerhard Schröder was Chancellor. When he moved in, he thought his new office was a bit too big, and he was not the only one who thought so. The reunification needed to be paid for. Reconstruction in the new provinces located in former East Germany was not cheap.

For that reason, the Chancellery’s price tag of 513 million Marks (262.3 million Euro, 299.3 million U.S. Dollars or 232.8 million Pounds Sterling) seemed quite high, to say the least. But the building had already been erected. So Schröder moved in. He now had the largest government headquarters on the entire planet, eight times the size of the White House in Washington D.C..

On the ground floor, the building has a big conference room with cabins for interpreters as well as sort of a theater which accommodates 200 people. The second and third floors are reserved for the service personnel as they contain a huge kitchen and the tech rooms necessary to run things in the building, from elevators to communication systems.

The fourth floor offers a bugproof conference room and an archive. Another floor up, the big banquet hall is located, along with some offices. The 6th floor contains two cabinet halls. Those are in use quite often. On the 7th floor, the Chancellor has a nice view of Brandenburg Gate from his or her office. The head of government’s apartment is on the 8th floor. Three hundred offices for the Chancellor’s staff are located in the building’s side wings.

Guess what: All of this is not enough anymore. The building is bursting. Angela Merkel’s staff does not fit. The number of her staffers has nearly doubled in the past years. Also there is one amenity the old building does not have: a helipad.

Merkel’s Chancellery Minister Helge Braun announced the construction of a second building in early 2019. It will be located across the Spree river, right on the other side, and connected to the existing main building by two bridges.

Once the Chancellery extension is completed in 2028, staffers will not have to use conference rooms as offices anymore. People won’t be stepping on each other’s feet. They still have eight years to think about the color of their walls and carpeting. The new building will have six floors, 400 offices, a kindergarten, a canteen, loads of conference rooms and a fancy helipad. These days, Mrs. Merkel’s helicopters land in the park next door. Her security team does not like that aspect at all.

Axel Schultes and Charlotte Frank, the architects who built the ‘washing machine’, which is how heretics call the existing Chancellery, have also designed the second building. Its price tag used to be 460 million Euro (524.7 million U.S. Dollars or 408 million pounds). Then the Interior Ministry increased it to 600 million Euro (706 million Dollars or 546 million Pounds) because of “rising construction costs.”

Now the Federal Audit Office is warning the costs, which are already extremely high, might increase even further. According to the ‘Morgenpost’ daily, a new report by the authority came to the conclusion that not all expense factors were even known and that there was “a significant, additional cost risk”.

Besides, not all known cost factors were considered sufficiently in the projections, including recently added aspects such as energy efficiency measures for the sleek new building, the Federal Audit Office believes. The square meter price for Chancellery’s extension already exceeds that of other costly projects, including Berlin Palace.

So, is the Chancellery project a money pit? Apparently yes. The German Audit Office now wants the planners to look into saving some money, by throwing parts of the project overboard and simplifying others. But the Chancellery and the Interior Ministry disagree. They say the new building should be erected on the same architectural level as the existing Chancellery was built on.

The Audit Office, on the other hand, insists the costs for the Chancellery extension need be decreased by 35 million Euro (41 million Dollars or 32 million Pounds) in order to relieve the German tax payer.