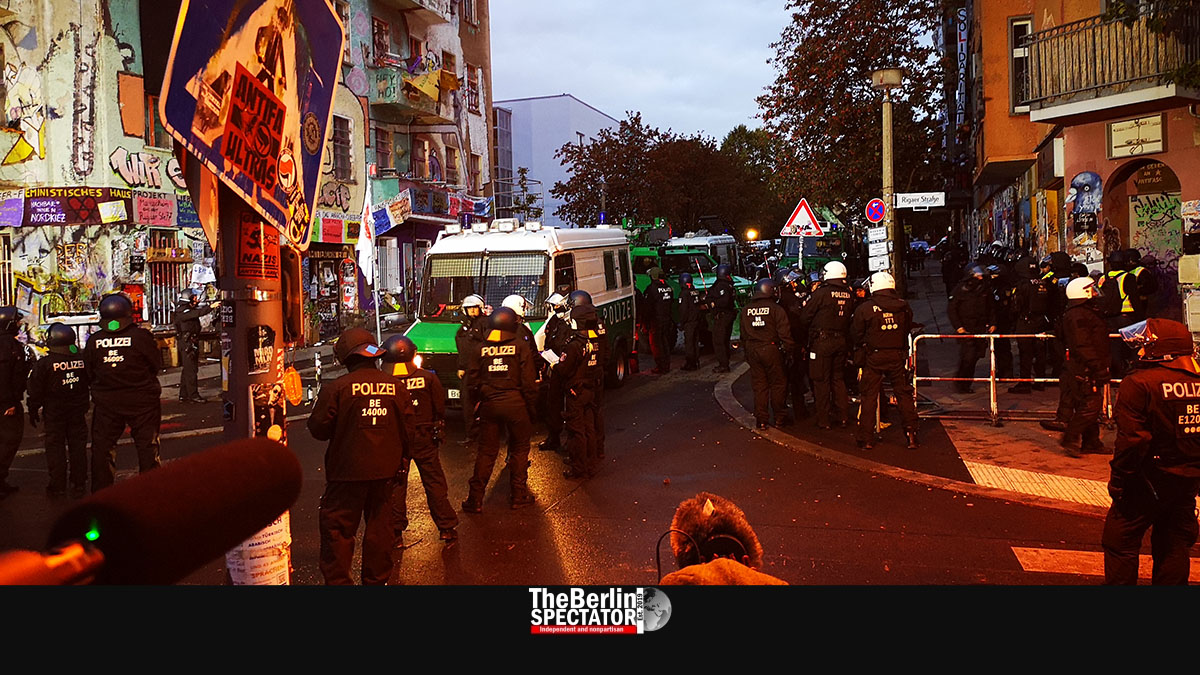 In Berlin, police took squatters out of an apartment block in the Friedrichshain-Kreuzberg district on Friday, only hours after a court confirmed the residents lived there illegally. The operation was completed in the late morning.

Berlin, October 9th, 2020 (The Berlin Spectator) — With the help of colleagues from all over Germany, the Berlin Police started evicting squatters from a building in Friedrichshain early on Friday.

At several locations around the apartment block in Liebigstrasse 34, hundreds of people rallied against the eviction. Left-wing radicals attacked police officers and journalists with stones, bottles and color bombs. Also they set cars on fire in the neighborhood. A series of minor terror attacks against a court house, a police station, party offices and attorney’s offices during the days leading up to the eviction are likely connected to the extremists who lived in the building until today, and their supporters.

Before 7:00 a.m., on Warschauer Strasse, police stopped groups of young people who looked like they were going to join the early morning protests. They searched them for illegal items, such as weapons or fire accelerant. Then, a dozen police vans with a hundred officers raced by towards Liebigstrasse and woke up the entire neighborhood with their sirens.

On site, around the building in question, police had already set up barricades at several intersections in the area. Many neighbors watched the events unfold from their balconies, while policemen and policewomen from several federal states, including North Rhine-Westphalia, secured the area.

Note: The Berlin Spectator calls individuals, groups, parties or organizations ‘radical’ or ‘extremist’ when they oppose Germany’s Liberal-Democratic Constitutional Order by fighting democracy or attacking the country’s institutions. This applies to both the far-right and far-left spectrum.

Shortly after 07:00 a.m., an armored vehicle in the old, green police livery was parked in front of Liebigstrasse 34. Officers from the technical division within the police started working on the steel door the residents had installed. It took them some 30 minutes to open it using crow bars and portable buzz saws.

At the same time, a ladder vehicle in black arrived. Some officers used it to get to a window on the first floor. Breaking it open was hard work because the residents had barricaded it with wooden stakes and iron constructions. At some point, police men managed to enter the apartment block through both the window and the main door.

Some ten minutes later, they took some residents outside, down the ladder, while other officers were still busy opening doors by force inside the building. A police spokesman on site told The Berlin Spectator, manipulated fire extinguishers had been installed in the entrance. They had looked like booby traps, but were actually harmless.

By 11:00 a.m., twenty illegal residents had been taken out of the building, checked and released afterwards, the police said. But several officers were still busy going through the apartment block, floor by floor. Then, at 11:30 their mission was completed. A total of 1,500 police men and police women were on duty at and around Liebigstrasse.

In a designated area across the street, dozens of photographers, camera people, TV and newspaper reporters watched the scene. Some of them did not wear masks even though Berlin is a Corona hotspot with alarming numbers. One reporter was full of pink paint, from his head down to his toes. He had been hit by a color bomb thrown by the radicals.

One of Last Symbols

Liebigstrasse 34 was one of the last symbols of left-wing radicalism in Berlin. The latter has a long ‘tradition’. It started in West Berlin during the student revolution of 1968, changed over the years and survived, in part, until today. The radicals who lived in Liebigstrasse for decades oppose pretty much everything, including the state, the police and Germany’s Liberal-Democratic Constitution Order, which is a complicated term for its democracy.

In Hamburg, the Rote Flora theater and a building at Hafenstrasse were the centers of the radical left scene there. Another former squatter object in Berlin, namely just around the corner from the freshly evicted one in Liebigstrasse, has been causing headaches for many years as well. That one is located at Rigaer Strasse 94. More minor terror attacks against authorities and institutions, after today’s eviction, are likely.