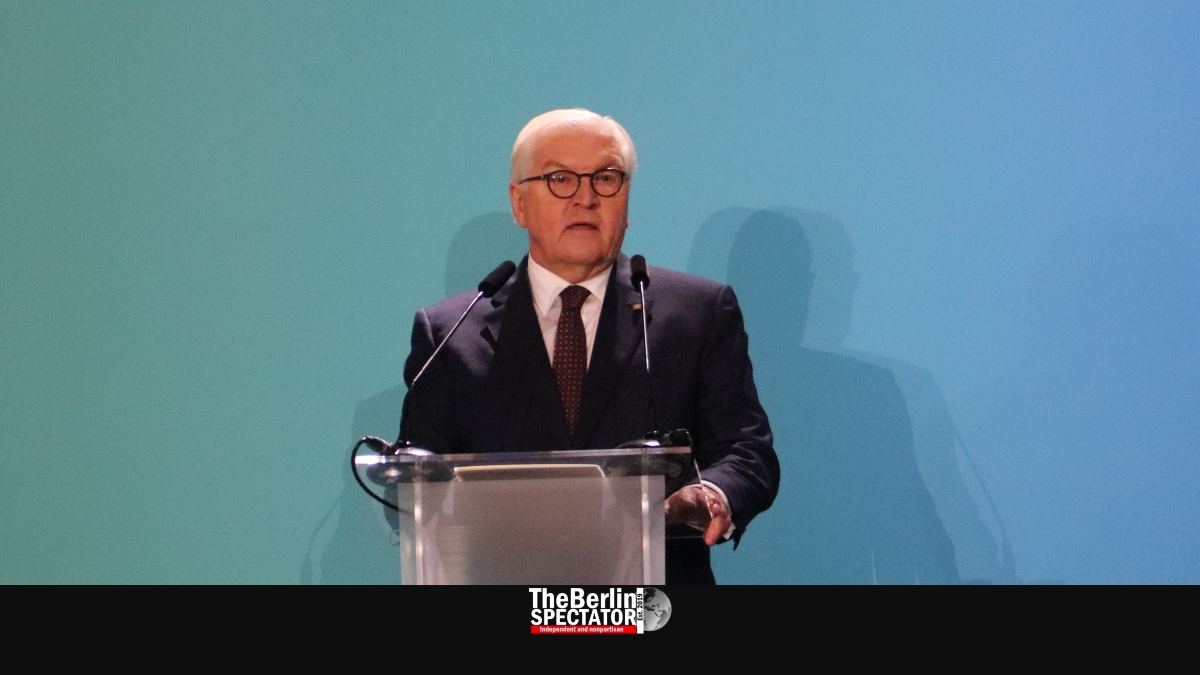 A year ago today, two people were murdered in Halle. Had the Nazi culprit managed to open the local synagogue’s main door, he would have killed many more. The attack answered the question whether Jews can live in Germany without fear.

Berlin, October 9th, 2020 (The Berlin Spectator) — On October 9th, 2019, at 12:01 p.m., Stephan Balliet, a Nazi from Halle, tried to open the door to the Synagogue of Halle. Inside the temple, congregation members were observing Yom Kippur, the most important high holiday in Judaism. Balliet wanted to shoot all of them, because they were Jewish.

He did not manage to open the door, not even with self-built grenades he threw at it. At this moment, a stable door was the one thing that saved the lives of everyone inside. There was no police protection, even though this kind of security is obviously necessary for Jewish facilities in Germany, and in spite of the fact that the Jewish community in Halle had asked for protection.

At 12:03 p.m. on that terrible day, Stephen Balliet shot a woman to death outside the synagogue. Her crime, in the Nazi’s sick world view, is that she had addressed him because of the loud explosions he was causing. At the same moment, people inside the temple called an emergency number to report the attack.

Minutes later, the extremist right-wing terrorist got back into the car he had used to get to the synagogue. He drove half a kilometer to a Turkish doner kebab place which he attacked with Molotov Cocktails. Inside, he fatally shot a man. Then he shot at police officers who came to the scene. It took until 1:38 p.m. until Baillet finally was arrested.

The two murders, and the dozens of attempted murders were not really a surprise to some, because the imminent danger deriving from radical right-wingers was not a secret before the attack. The murder of Walter Lübcke some four months before, the ‘NSU’ murders years before, and known threats had been discussed and written about a lot. Of course, the deadly attack in Halle shocked Germany anyway.

The trial against Stephen Balliet commenced two and a half months ago, on July 21, 2020. He was indicted for two murders, attempted murders in 68 cases, incitement and other crimes. It will take months until there is a verdict.

Today, on the first anniversary of the Halle attack, the victims were commemorated. Germany’s President Frank-Walter Steinmeier was there. A week and a half ago, on September 29th, the World Jewish Congress had held its own commemoration event in Halle, at both the synagogue and the doner kebab stand.

A year after the attack, the crime and its implications are still being discussed. There is one big question the murders answered, namely whether Jews can live in Germany without fear. No, they obviously can’t.

In order to protect the relatively small Jewish community, the state just allocated 22 million Euro (26 million U.S. Dollars or 20 million Pounds Sterling) to improve safety at synagogues, Jewish schools, Jewish kindergartens and other Jewish facilities. The police are now protecting the synagogue even in Halle. These are important but secondary, superficial aspects.

Antisemitic attacks, like the one in Halle, or the attempted murder in front of the Hohe Weide Synagogue in Hamburg the other day, are attacks against Germany as a whole, against the free and democratic country it is. And the hatred does not come out of nowhere.

After the Halle attack, the extremist right-wing party ‘AfD’ was being accused of being a mental arsonist because of the hatred it had spread for years. While some high-ranking members rejected the notion their party was responsible, one of them, the AfD’s deputy Stephan Brandner, indirectly confirmed it, by asking this question: “Why do politicians with candles hang around in mosques and synagogues?”

One thing is certain: Stephen Baillet, but also Stephan Brandner and other haters, were influenced somewhere. Their hatred most likely developed early on. Recently, members of democratic parties in Germany have said antisemitism and other forms of hatred needed to be addressed at schools much earlier than at secondary school.

Yesterday, the Central Council of Jews in Germany, the country’s coordinator in the fight against antisemitism, Felix Klein, Monika Grütters, the Federal Government Commissioner for Culture and the Media, and Olaf Zimmermann of the ‘Initiative Cultural Integration’ announced a photo competition.

It is entitled ‘Solidarity in Diversity – Jewish Everyday Life in Germany’ and being sponsored by media and other organizations. Details on the photo competition, in German only, are available here. The purpose is to make Jewish life in Germany visible more, in order to fight prejudice.

“Jewish life is a constituent part of our history and present”, Felix Klein said in Berlin. “It is powerful and confident.” Josef Schuster stated it was high time to get rid of reservations and prejudice towards Jews and to force back right-wing extremism. His organization runs several projects with that purpose, including ‘Schalom Aleikum‘ and ‘Meet a Jew‘.

Today’s commemoration in Halle began at 12:01 p.m., the moment the first shots were fired a year ago, with bell-ringing at the city’s churches. Many residents observed a minute of silence on the main square. At 12:30 p.m., a ‘Democracy Conference’ organized by the government of the federal state of Saxony-Anhalt took place.

In the synagogue’s yard, a memorial was unveiled at 3:30 p.m.. It contains the door that protected the members of the Jewish congregation who were at the synagogue a year earlier. A memorial plaque was be unveiled at the kebab stand.

At Halle’s ‘Ulrichskirche’ church, President Steinmeier sad a nightmare had become reality “in broad daylight, in the middle of Germany. Germany, of all places. A year has passed, but the pain and outrage have not.” Steinmeier said his thoughts “and my profound sympathies” were with the next of kin of the victims.

“Two people were murdered in cold blood, because they happened to be in the wrong place at the wrong time”, the German President said. “For those closest to them, nothing has been the same since. There is no consolation for their loss. As Federal President, today I say to you, the bereaved: We
stand beside you. All of us, the people in our country, join you in
mourning. We do not forget.”

Frank-Walter Steinmeier said that October 9th, 2020, was supposed to be a day of joy. “Not far from here, in Leipzig, we were going to be remembering the courage of the tens of thousands of people who took to the streets on October 9th, 1989, who dreamed of freedom and fought for freedom, and for respect for human dignity. We wanted to celebrate those peaceful revolutionaries, without whom the Wall would never have fallen and our country would not have enjoyed 30 years of unity.”

A year ago, a right-wing attacker had wanted to carry out a massacre in a synagogue on the holiest day of the Jewish year, Steinmeier stated in Halle. “In broad daylight, in the middle of Germany. In Germany, of all places. On Yom Kippur, of all days. The synagogue was full: old people, young people, families with children, visitors from abroad. They were to die. That was the perpetrator’s barbaric plan. The fact that this brutal plan failed is nothing short of a miracle.”

At the ‘Marktkirche’, another Christian temple, a prayer was scheduled to take place at 7:00 p.m.. Afterwards, the participants are expected at the Synagogue of Halle, for a more informal meeting with the congregation there.