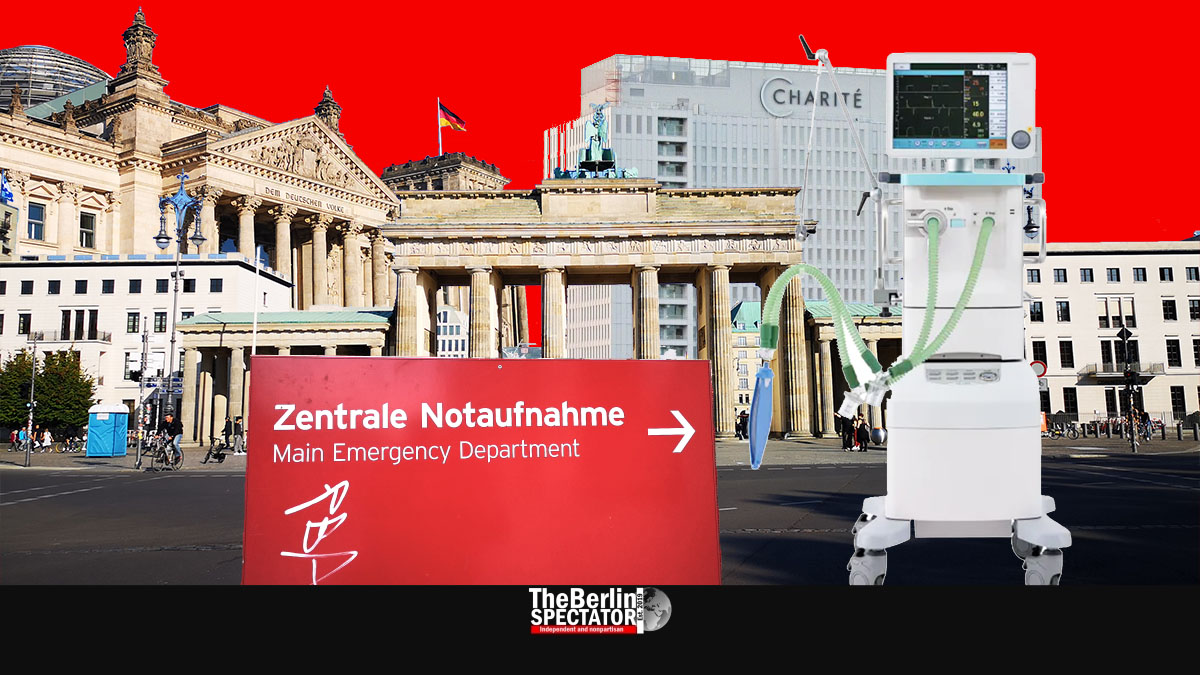 While the number of Corona patients in German intensive care units is increasing again, the discussion about accommodation bans for residents of high risk areas is continuing. Berlin’s Governing Mayor Müller criticized the policy.

Berlin, October 12th, 2020 (The Berlin Spectator) — In Berlin, 160 COVID-19 patients are being treated at hospitals right now. Thirty-nine of them are in intensive care units, the health authorities say. According to the ‘Tagesspiegel’ daily, 24 ICU patients are on respirators. Compared to September 23rd, twice as many COVID-19 patients were being treated in Berlin’s ICUs right now, the publication reported. Considering the speed at which the Coronavirus is spreading in Berlin right now, their number might soon double again.

For the German capital, the Seven Day Incidence Number, which shows how many new Corona infections there have been per 100,000 inhabitants in the past seven days, stood at 61.3 on Sunday. Countries, regions or cities with values above 50 are being seen as high risk areas.

In Germany, the discussion about restrictions for residents of high risk areas like Berlin in some federal states is intensifying. Berlin’s Governing Mayor Michael Müller said in an interview with ZDF television, the accommodation ban for Berliners at hotels in neighboring Brandenburg did not make sense at all.

According to Müller, hundreds of thousands of commuters from Berlin and Brandenburg meet in shops, in public transport and at work every day. At the same time, Berliners were not allowed to spend nights in Brandenburg’s ‘Spreewald’ region. The Governing Mayor, who used the picturesque ‘Spreewald’ as an example, intends to get rid of that rule.

The issue is that several federal states within Germany have implemented accommodation bans for residents of high risk areas. Michael Müller and other politicians insist on putting the issue on the agenda of the next Conference of First Ministers later this week.

The total number of Corona infections in Germany is now 326,309, or 2,412 higher than yesterday. But because not all health authorities in Germany pass on numbers on Sundays, the actual number of new cases might be higher.

Just like Berlin, Stuttgart and other places, the government and the authorities in North Rhine-Westphalia, Germany’s largest federal state, are fighting high Corona numbers. On Sunday, First Minister Armin Laschet announced restrictions for private parties that take place outside private homes. The number of participants would be limited to 50.

For the entire state of North Rhine-Westphalia, the Seven Day Incidence Number is approaching 35, which is already high. The state has several Corona hotspots. According to Armin Laschet, counties and cities with Incidence Numbers of 50 or higher need to take counter measures.

In these cases, the number of people from different households who are allowed to meet in public will be limited to five. Curfews and a limit of 25 guests at private parties are additional measures for Corona hotspots. These restriction are comparable to what Berlin and other federal states have announced.

On Sunday, the Incidence Numbers in nine counties and cities in North Rhine-Westphalia had already exceeded 50. They include Cologne, Essen, Hagen, Herne, Solingen, Unna and Wuppertal. Three large cities that all start with the letter ‘D’, namely Dortmund, Duisburg and Düsseldorf, reported Incidence Numbers above 35.

Top 10: The Worst Jobs in Berlin