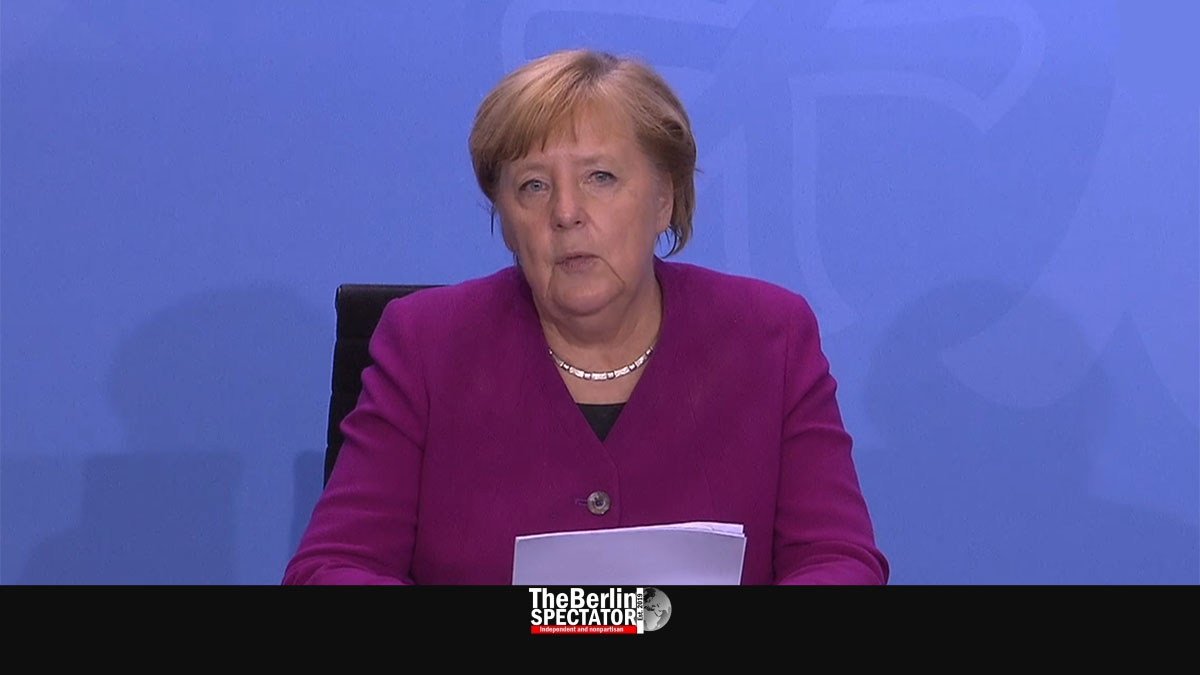 After hours of discussions at the Chancellery in Berlin, Angela Merkel and the heads of government from Germany’s sixteen federal states agreed to a strategy designed to get the alarming Corona numbers down. But the plan is not as convincing as it should have been.

Berlin, October 15th, 2020 (The Berlin Spectator) — At 2:00 p.m. on Wednesday, the First Ministers, the First Mayors from the city states of Bremen and Hamburg, as well as Berlin’s Governing Mayor Michael Müller arrived at the Chancellery at the Spree river in Berlin. Müller did not have to travel far. Neither did Dietmar Woidke from neighboring Brandenburg.

For the first time in four months, they all came to Berlin in person instead of just setting up a video connection. Angela Merkel had asked the First Ministers for a physical presence in Berlin, presumably because that way they could not just cut the connection in case of disagreements. And there was plenty of that. Psychological warfare could have been useful, in the sense that Mrs. Merkel can generally pressure her guests more when they sit next to her. But it did not work too well this time.

First the Social Democratic First Ministers and Mayors reportedly were not too happy because the Chancellor had already talked about options with her Christian Democratic party colleagues before the main meeting commenced. For two hours, the participants discussed Corona with the immunologist Professor Michael Meyer-Hermann before the actual deliberations about the best way to go ahead started.

Merkel, a scientist herself, had invited him to talk about the pandemic. According to participants, he said this was not the eleventh hour anymore, but high noon. According to German-language media, Professor Meyer-Hermann even suggested exit bans for residents of Corona hotspots, but this subject was not discussed once he had left.

In the evening, Angela Merkel and her guests agreed to some measures. For instance, there are supposed to be curfews from 11:00 p.m. in all high risk counties and cities with Seven Day Incidence Numbers of 50 or more. Berlin, one of the main Corona hotspots in Germany, already has this kind of rule, along with an alcohol ban. The latter just means that alcoholic beverages may not be served or sold from 11:00 p.m. to 6:00 a.m..

An additional mandatory mask rule was agreed to. Once a city or county has an Incidence Number of 35, masks have to be worn at crowded places outdoors. This is a new approach in Germany. Only some cities, including Munich, have had mask rules in their city centers. In the Bavarian capital, the temporary measure helped decrease the Corona numbers to some extent.

The contact restrictions Mrs. Merkel and the ‘Ministerpräsidenten’ (this is the long German word for First Ministers) agreed on were not really new, meaning similar rules had been in place in spring, and already are again in some federal states.

No Agreement on Accommodation Ban

In high risk areas, with Incidence Numbers of 50 or higher, up to 10 people or members of up to two households may participate in private parties. The same number of people, up to ten, may come together in public. The latter rule is supposed to be tightened further if it does not have the desired effect. In that case, only five people from different households may meet in public.

There was no agreement on a subject which had been discussed intensively all over the country, from Flensburg to Traunstein, and from Görlitz to Trier, for days, namely the accommodation ban. Some states do not let residents from high risk areas enter hotels. While certain states believe this measure is nonsense in this situation, others insist it is not.

In the evening, the participants decided to postpone a decision on this subject until November 8th. Then Angela Merkel reportedly told the First Ministers she was not happy with the overall outcome of the discussions and wanted to get back into all aspects that were already discussed. So it was back to square one at 8:45 p.m. local time.

Mrs. Merkel wanted strict measures designed to decrease the Corona numbers as quickly and as far as possible. And she wanted uniform rules, at least in part, for all of Germany. Those goals were only partially reached.

After the ling meeting, the Chancellor told the press, Germany was already in the exponential phase, as the infection numbers showed. Everything had to be done to stop their growth. The German head of government said she thought the decisions that had been taken were an important step. Angela Merkel stressed the exponential spread of the Coronavirus needed to be stopped. “Otherwise, all of this will not come to a good end.”

Berlin’s Governing Mayor Michael Müller, who is now chairman of the Conference of First Ministers, said the consultations had been long and there had been controversies. But everyone had been aware of the fact that the country was in a grave situation. A lot was at stake right now.

Bavaria’s First Minister Markus Söder said, headway had been made for the entire country. But, to his opinion, the question whether the measures were strict enough was open. A second lockdown was “closer than we want to acknowledge”, Söder stated.