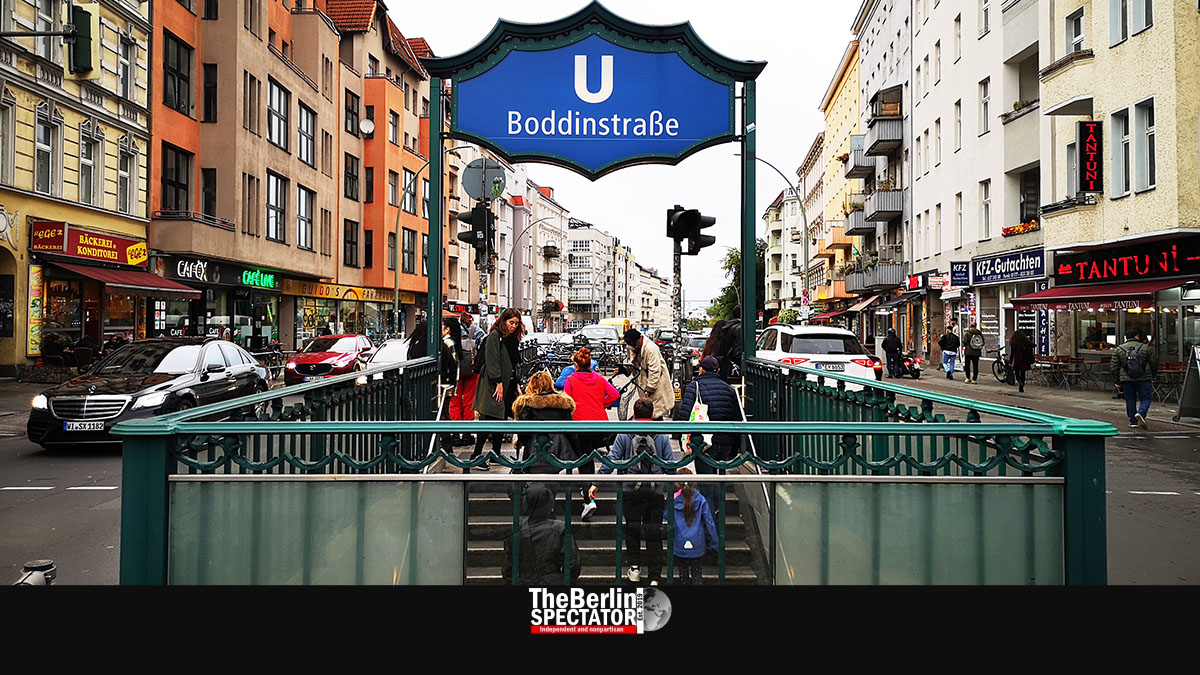 Welcome to Neukölln, the place to be. It is lively, international and offers culture and great food, mainly from Turkey and the Middle East. But it has a long list of problems too. A new one was recently added.

Berlin, October 16th, 2020 (The Berlin Spectator) — Neukölln is a place of contrasts. It is a deprived area and a good place for families, it is both dangerous and relaxed, depending on the exact location, it is very Turkish and Arabic, as well as African, German, Indian and European. Neukölln is beautiful and ugly, clean and dirty, loud and quiet, green and polluted.

Neukölln did have many problems in pre-Corona times. Those included rising rents and a gentrification process, crime and poverty. In Neukölln’s ‘U-Bahn’ train station ‘Hermannplatz’, a young man smoked Crack in front of passers-by yesterday. He was not the only one and probably does it every day. Alcoholics and homeless individuals live in this district’s metro stations and keep on urinating into them.

In Neukölln, more people live close to — or below — the poverty line than in all other Berlin districts. Homophobia, antisemitism and other forms of hatred, along with violence, are yet another problem. Both extremist right-wingers and radical left-wingers are active in Neukölln. The same applies to Islamists. In April, a mosque in Neukölln was raided and shut down by police, and it was not the first time.

Drugs at the Park

The police are waging war against Arab family clans. Raids at Shisha bars and other kinds of businesses owned by them are a regular occurrence. Recently, the police were attacked by left-wing extremists who had to be evicted from a famous pub they had run for a long time. The fact that drug dealers are controlling part of the large ‘Hasenheide’ park has been a big issue for decades.

On top of it all, the noise, the traffic jams and the trash on some streets are annoying. Karl Marx Strasse and Hermannstrasse are chronically congested. People parking in the second row and the increasing traffic cause jams all the time. It is a mess.

In 2004, Heinz Buschkowsky, a former Neukölln district mayor, released a book entitled ‘Neukölln is Everywhere’ in which he said the integration and multicultural society German politicians wanted had failed in Neukölln, and in similar places.

But Neukölln is also a good spot. Many young families with children live here. Recently, the number of restaurants, pubs and cafés exploded. The number of Turkish vegetable stores and doner kebab parlors is probably higher than in Ankara. Nice weekly markets, including a flea market and a Turkish market, at Landwehr Canal attract many people.

Everything Anyone Could Want

‘Afro Shops’ offer imported products the African community longs for, a beautiful Hindu temple is being constructed at ‘Hasenheide’. Neukölln has vegan food places, second hand stores and almost everything anyone could want. Nice festivals used to take place here, before Corona. Some good movie theaters offer the more intellectual kind of motion pictures. This publication, The Berlin Spectator, is headquartered in Neukölln.

The Neukölln district has 330,000 inhabitants. It includes a borough of the same name with 166,000 residents, plus several others, and reaches from Hermannplatz, a loud and dirty square at the border to artsy-fartsy Kreuzberg, all the way down to Berlin’s southern city limits. Schönefeld, the airport county in Brandenburg, is this district’s neighbor. Neukölln is a lot younger than the rest of Berlin. There are a lot more people with immigrant backgrounds than Germans in the Neukölln borough.

Now there is one more entry on Neukölln’s list of problems: It has become Germany’s Corona hotspot number one. Judging from the catastrophic infection numbers, hardly anyone in this district seems to be giving a damn about anything. Their own health and that of others does not seem to be too important to many.

In summer, Neukölln’s largest park, the ‘Hasenheide’, was invaded and messed up by thousands of party people from all over Berlin every weekend. They definitely did not care about Corona rules. On a regular basis, the police chased them away. But other aspects, including big family events and ignorance, contributed to the high Corona numbers.

At the intersection of Spremberger Strasse and Bürknerstrasse, long lines of waiting people on the sidewalk have become a regular occurrence. As it turns out, they are waiting to be tested for Corona. At a doctor’s practice located there, individuals with possible COVID-19 symptoms can get tested. The health insurance pays for it.

The same applies to people who have been in contact with infected persons, those who were sent into quarantine because of Corona infection cases at their schools or work places, and people who just returned from high risk areas abroad.

Quick Tests Cheaper than Slow Ones

An employee on site told The Berlin Spectator, persons who just wanted a Corona test because they intended to travel needed to pay for their tests themselves. They had the choice between a regular test for 170 Euro (199 U.S. Dollars or 154 Pounds Sterling) and a quick test with a lower accuracy for 50 Euro (59 Dollars or 45 Pounds). The result for regular tests is available after 48 hours, the one for those cheap tests within 15 minutes.

The Seven Day Incidence Number in Neukölln stood at 170 this morning. This means that there have been 170 new infections per 100,000 inhabitants in the past seven days. This translates to approximately 520 new infections in Neukölln only within that time frame. The incidence number for all of Berlin is 78.3 right now. At 50, a city or county becomes a high-risk region.

Neukölln needs lots of things. Now the priority is to get the number of Corona infections down. This applies to all of Berlin, Germany, Europe and the world too, but, from a local perspective, it especially applies to Germany’s worst Corona hotspot. We have to give those Neuköllners one thing though: More of them seem to be wearing masks now that the district might be on the brink of losing control of the virus.

Nicolai Savaskan is Neukölln’s chief health officer. He just told the ‘Tagesspiegel’ daily, the Corona situation in Neukölln was probably a preview of what would be going on in all German cities soon. He said Neukölln was the sensor for the entire country and compared the circumstances to a forest fire. Savaskan also complained that in 70 percent of all new Corona cases, the centers of infection, meaning the sources, could not be found anymore.