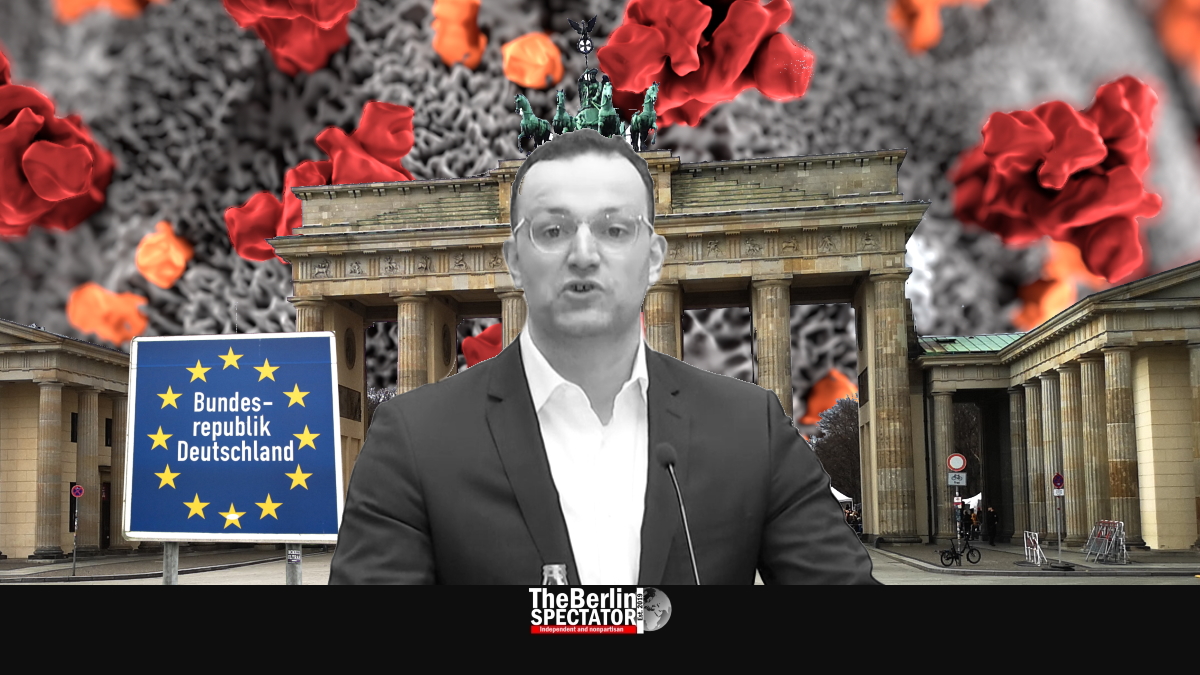 Yet again, Germany reported the highest number of new Corona cases since April. As many as 7,620 of them needed to be added within 24 hours. According to Health Minister Jens Spahn, the country is in the process of losing control.

Berlin, October 16th, 2020 (The Berlin Spectator) — Jens Spahn, the youngest cabinet member in Berlin, should maybe change his job title from Health Minister to Corona Minister. Since day one of the crisis, he has been working relentlessly. Spahn deals with the latest research, he tells the nation what to do, informs people about the latest developments and usually spreads optimism.

The latter just faded a little, amid the latest terrible Corona numbers. During a Bloomberg online seminar, Jens Spahn just said Germany was in the process of losing control of the Coronavirus. According to him, the problem is that the local health authorities cannot track down all contact persons anymore, people who were in contact with infected individuals.

With each new Corona case, the issue he identified becomes worse. In Berlin, the spread of the virus seems unstoppable. The German capital reached a Seven Day Incidence Number of 78.3. The Neukölln district is the worst Corona hotspot in the sense that its numbers are the most alarming ones (read separate feature ‘Berlin-Neukölln: Germany’s Worst Corona Hotspot‘). But it hardly makes a difference anymore because things are pretty bad in almost all districts by now.

According to the RBB radio and TV network, as many as 460 soldiers are helping the local health authorities track down contact persons in the Berlin Brandenburg metropolitan area. While thousands of people need to be found and sent into quarantine, it takes 13 hours to deal with seven of them. What this means is that, ideally, far more soldiers should be working on the task.

With 7,620 new Corona infections in Germany (numbers based on data provided by Johns Hopkins University) between yesterday morning and this early morning, Germany just hit a new fall record. Since April, the spread of Corona has not been this fast. The entire country, including its government, is asking itself one question: Where is the limit?

Those alarming numbers make one thing hard to believe: Compared to its nine neighboring countries, Germany is still doing quite well right now. Last night, the E.U.’s heads of government agreed on a more intensive cooperation in the fight against Corona. This is what Chancellor Angela Merkel announced after the first day of the ongoing E.U. summit.

Mrs. Merkel said there would be more consultations via video connections. She stated this was about the health of many people, about the question how many people would have to die and about Europe’s economic capability.

In the meantime, the so-called accommodation ban at hotels for residents of high risk areas was thrown overboard in some federal states, namely in Baden-Württemberg, Lower Saxony, Saarland and Saxony. But this measure does apply in Bavaria, Brandenburg, Hesse, Mecklenburg-Hither Pomerania, Saxony-Anhalt and Schleswig-Holstein. Persons who show negative Corona tests done within 48 hours before their arrival are exempt. In some cases, the test needs to be done 24 hours before.

The anti-Corona rules that apply in Germany’s sixteen federal states are still hard to keep track of. In spite of Wednesday’s decision to align the rules more, there are many differences that confuse people.