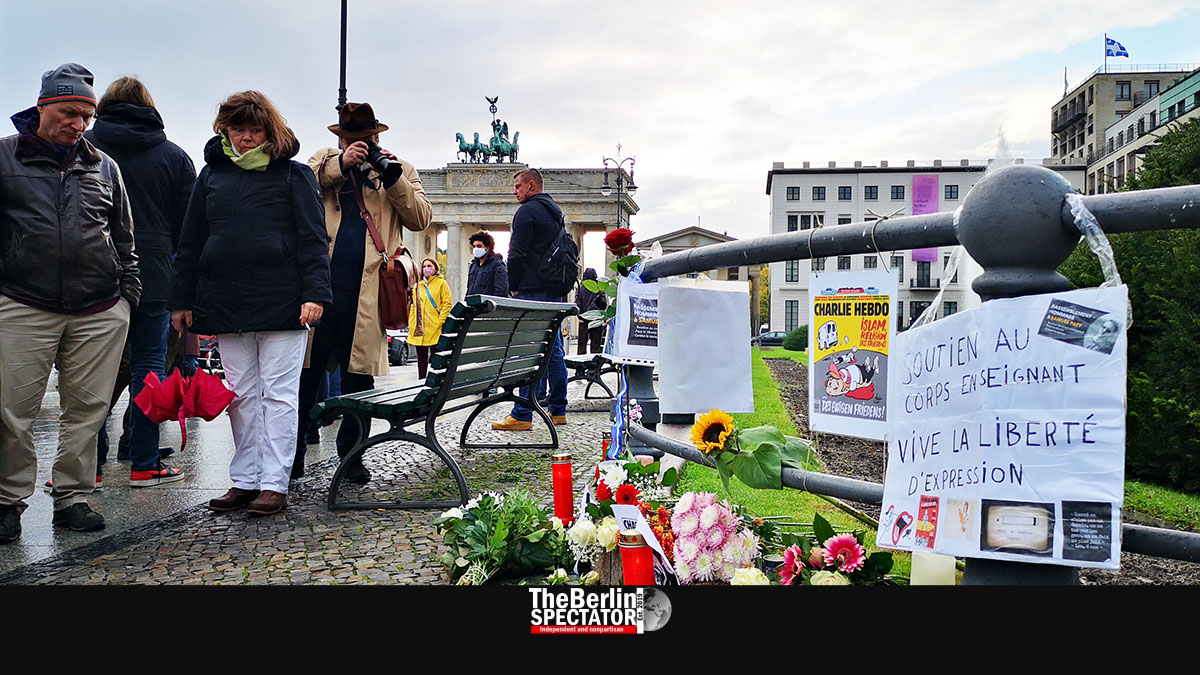 Samuel Paty, who became the victim of an Islamist terror attack in Paris on Friday, was commemorated in Berlin today. In spite of rainy weather, dozens of people turned up to be part of the event.

Berlin, October 18th, 2020 (The Berlin Spectator) — Some eighty people took part in a commemoration event for the French middle school teacher Samuel Paty who was beheaded in an Islamist terror attack in the banlieue of Paris on Friday. A German student registered the Berlin event with the police. It took place in front of the French Embassy.

Participants placed flowers and signs on the street. One said “Vive la liberté d’expression” (“Long love freedom of speech”), another one was a copy of a Charlie Hebdo cover. French nationals came to the commemoration, so did Germans and citizens of other countries.

Seyran Ateş was there, a prominent Muslim lawyer of Turkish origin. She said she was shocked about the low number of participants, and about the fact that no high-ranking politicians had joined the commemoration. She also said political Islam needed to be fought more, in Germany and Europe.

She expressed her condolences to the relatives of the victim and the eyewitnesses of the Islamist murder, as well as her “deeply felt contempt for those whose spinelessness is responsible for the fact that a person can be murdered in Europe, for talking about caricatures.”

Three years ago, Seyran Ateş founded Germany’s first liberal mosque in Berlin. She opposes letting female Muslim teachers wear headscarves at German schools and expresses strong opinions about integration of Muslims in democracies as well. As a result, she receives threats on a regular basis, and showed up with three bodyguards.

Samuel Paty was murdered because he had talked about freedom of speech and politcal cartoons with his students. He also showed them a Charlie Hebdo cartoon of prophet Muhammad. Before doing so, he reportedly told his students they could leave beforehand if they did not want to see them.

Afterwards, a father of a student who had not even been in class that day complained to the school. Before he was decapitated, Samuel Paty received death threats. The 18-year-old culprit was shot dead by police when he refused to put his gun down.

There have been many Islamist terror attacks in France in the past decade. The worst one took place in Paris on November 13th, 2015. One hundred and thirty people were murdered and 413 injured. Seven terrorists were neutralized during the hunt for those responsible.

In Germany, the government has been criticized for paying court to terror supporters like the Teheran regime, and to support terrorism indirectly, for instance by funding Palestinian NGOs linked to the terror organization PFLP and the Palestinian Authority, as well as for not fighting radical Islam persistently enough.