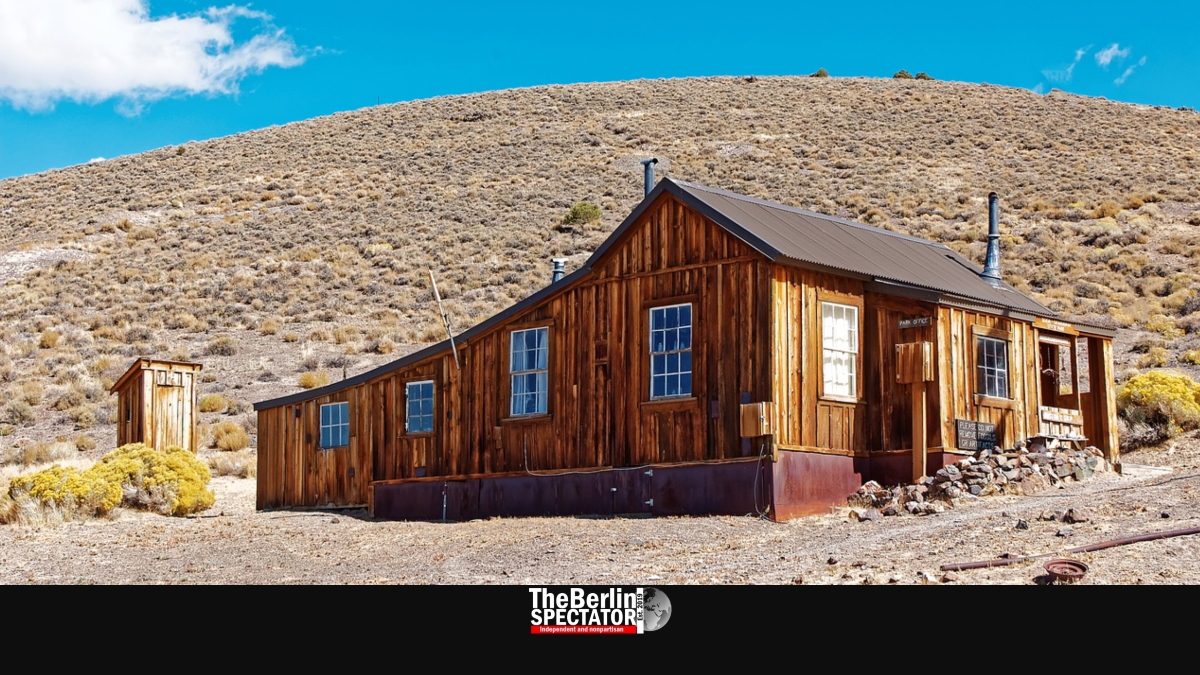 Berlin does not equal Berlin. Its descriptions definitely vary a lot. As it turns out, Berlin is everywhere.

Berlin is a ghost town. Established in 1897, it was supposed to prosper as a gold and silver mining location in Nye County, Nevada (see main photo above). The problem was that it never did. Today, Berlin is a tourist magnet. This latter aspect does sound familiar indeed, because that is exactly what the original Berlin was, before Corona turned it into lasagna.

But Berlin, Nevada, neither has a TV tower, nor a Red City Hall or a sexy new airport. It features a few wooden houses only, and some classic car wrecks standing around between them. This Berlin was abandoned 109 years ago, in 1911. Today’s historic sightseeing spot has something else the big Berlin in Germany does not have, namely real mountains in its vicinity.

O.k., let’s get to the right Berlin. This place must have a diner somewhere, where you can have hotcakes with syrup for breakfast and a real Hamburger with all the trimmings you want for lunch. It probably has a traffic light or two. Berlin, with a population of around 3,000 people, is just the right place for the Bee Gees. Their song ‘Massachusetts’ will tell you exactly where you are.

In this Berlin, they are raising cattle and chickens. It is not exactly a party town of the kind the original Berlin used to be. This is where people go to bed early and get up when the rooster next door wants them to. Oh yes, Berlin does have an elementary school, baseball and soccer groups as well as girl and boy scouts. Also the breathing air is a lot better up there than in the original Berlin overseas.

The next Berlin we are looking at obviously has something in common with Berlin in north-eastern Germany, namely its traffic and a lack of parking spots. In Berlin, Ohio, the tourists who come here cause a mess on the main street, judging from the photograph below. Regarding the number of inhabitants, there is a slight difference between Berlin and Berlin. The one in Ohio has less than 1,000 residents, while the one in Germany has 3.7 million.

By the way: Did you know the Whiskey Rebellion of the 1790s is being celebrated in Berlin? Neither did we. Were you aware of the fact that Berlin is located 75 miles southeast of Pittsburgh, Pennsylvania? Neither were we. We thought it was located in eastern Germany, around the Spree river. Also we had no clue Berlin had a bit more than 2,000 inhabitants. By the way: There is an East Berlin too, not that far away, in Union County.

There are more Berlins in Alabama, Georgia, Maryland and West Virginia. And there is one in Germany’s Schleswig-Holstein province. How in the hell did that happen? This Berlin is part of a town called Seedorf, it has 500 inhabitants and is about as sleepy as a cat on a warm oven. It is located 357 km (222 miles) from Berlin. By the way: There is a place called Berlinchen in Brandenburg province, which is even closer.

Believe it or not, but there are Berlins in Moldova, Poland, Ukraine and Russia. There are even more in Italy, Mexico, Honduras, Nicaragua, El Salvador, Costa Rica, Haiti and Jamaica. Yes, there are Berlins in almost all South American countries from Argentina to Venezuela. The same applies to the Republic of Chad and South Africa.

Still, the most lively Berlin of them all is the original. Experiencing its cultural overkill, when it still existed, was nice. The city’s diversity, the remains of the Wall that remind us of the peaceful revolution and all historic sites are priceless. We just decided to stay in the original Berlin, even though we would probably like the quietude in the other Berlins too.

Opinion: The Biggest Nuclear Power Fans Do Not Want its…

Germany: Winter Tires and the ‘Situational…

The Babi Yar Massacre: Too Terrible to Describe