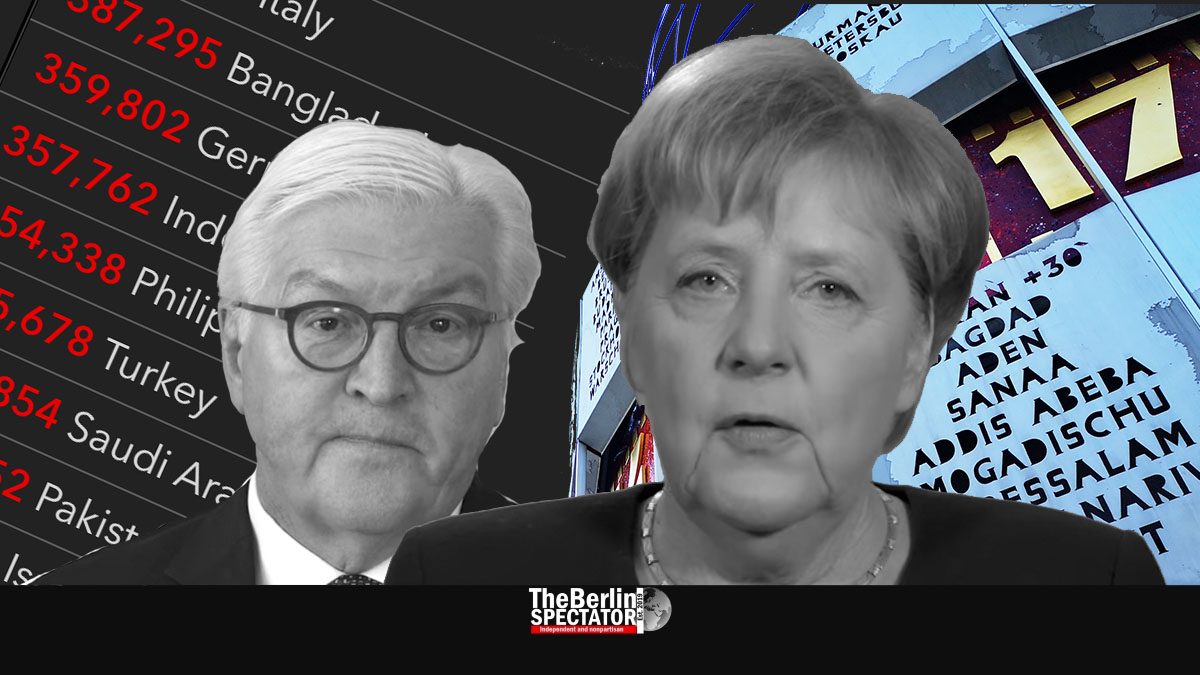 Germany’s President Frank-Walter Steinmeier is one of thousands of Germans who had to go into quarantine on Saturday. Chancellor Angela Merkel asked people to stay at home. And, yet again, Berlin is about to tighten its Corona rules substantially.

Berlin, October 18th, 2020 (The Berlin Spectator) — In Germany, there are as many as 85 Corona hotspots in eleven out of sixteen federal states now. All of them reported Seven Day Incidence Numbers of 50 or above. Quite a few, including Berlin’s districts Mitte, Neukölln and Friedrichshain-Kreuzberg are above 100. So are Weiden county in Bavaria, the city of Offenbach in Hesse, Delmenhorst and Northeim in Lower Saxony, Herne in North Rhine-Westphalia, Bitburg-Prüm in Rhineland-Palatinate and St. Wendel in Saarland.

One prominent Berlin Resident, namely President Frank-Walter Steinmeier, had to go into quarantine on Saturday. One of his bodyguards, who had worked for him in the past several days, had tested positive for Corona just before. But Steinmeier’s own Corona tests turned out negative, at least so far.

Because of the alarming infection numbers in Germany, Chancellor Angela Merkel made another dramatic appeal to the nation. She said the country was in a “very serious phase of the Corona pandemic”. On a daily basis, the infection numbers were increasing dramatically, and faster than during the first wave.

Merkel stated difficult months were ahead for Germany. In the coming days, it would become clear what the country would have to expect for the winter and for Christmas. A huge majority of Germans are Christians. “We decide with our actions.”

“We have to do everything possible to make sure the virus does not spread in an uncontrolled way. Every day counts.” The Chancellor explained that all contact persons for each infected individual needed to be notified in order to break the infection chains. The local health authorities were doing a great job, but in places with extremely high numbers, they were not able to keep track.

Angela Merkel told the nation that everyone needed to contribute by keeping their distance, by wearing masks and adhering to the hygiene rules. “But we have to go even further now”, the Chancellor stated. “If everyone reduces their number of encounters outside their own family for a while, we might manage to stop the trend towards more and more infections, and reverse it.”

She asked everyone to meet far less people, to refrain from trips that were not absolutely necessary and from attending parties. “Whenever possible, please stay at home”, Chancellor Merkel said. Germany had mastered the first six months of Corona relatively well, by keeping together and following the rules. Doing so now was more important that ever.

Because of the alarming infection numbers in Berlin, the city state’s Senate intends to tighten the Corona rules drastically, according to the ‘Tagesspiegel’ daily. A mandatory mask rule at markets and other crowded places outdoors is supposed to be put in place.

The contact rules will be a lot stricter was well, according to the report. Up to five people, or an unlimited number of people from up to two households, will be allowed to meet in public areas. Sports activities will supposedly be exempt from this rule.

What private events or parties are concerned, up to ten persons may take part indoors, or fifty outdoors, if the organizers come up with a convincing hygiene concept. The rules the First Ministers agreed to with Chancellor Merkel earlier this week are actually stricter in this regard. At protests in Berlin, masks will generally be mandatory.

The Senate will supposedly approve these and other decisions on Tuesday. On Saturday of next week, those tightened anti-Corona measures will be in place.

Apparently, Berlin has a new problem. More and more infected individuals refuse to list their contacts. According to Berlin’s Health Senator Dilek Kalayci, this especially applies in the Neukölln district, Germany’s main hotspot with extremely high Corona numbers. She said, weddings with many guests in Neukölln were contributing to the high Corona numbers.