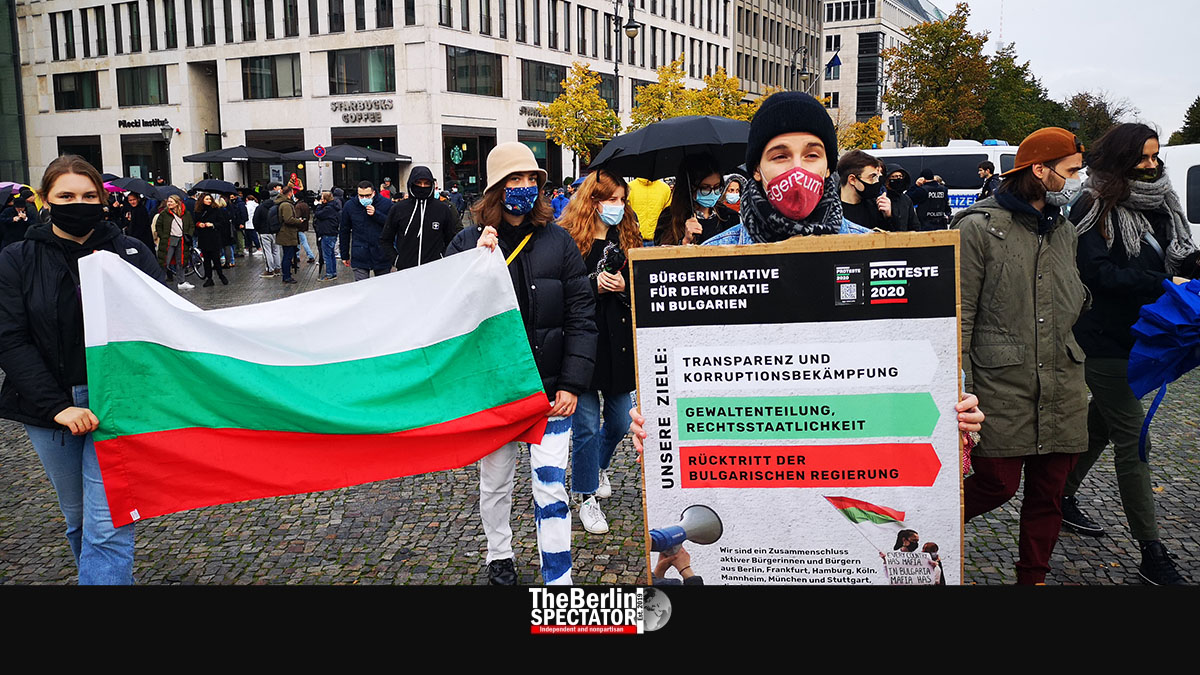 In Berlin, some forty Bulgarian expatriates staged a protest against the Sofia government of Prime Minister Boiko Borrissov on Sunday. They also want the Germans to drop their support for him.

Berlin, October 19th, 2020 (The Berlin Spectator) — In Bulgaria’s biggest cities, people have been demonstrating against the rampant corruption in their country for months. They accuse their Primer Minister Boiko Borissov and Chief Prosecutor Ivan Geshev of being part of an oligarchic system that exploits the country, and want both of them to step down.

About one million Bulgarians have left their birth country and live all over the world, including in Germany. In Berlin, many are part of the protest movement. They show solidarity with the protesters in Sofia, Plovdiv, Burgas and Varna from abroad. And they say German politicians and the E.U. needed to help them get rid of those who were ruining their country.

On Sunday, about forty Bulgarians gathered at Brandenburg Gate. They held signs saying the “mafia government” should step down. It needed to be investigated for abuse of office, and of funds provided by the European Union. On top of it all, the protesters demanded a judicial reform of the kind the E.U. had insisted on before Bulgaria joined on January 1st, 2007.

Bulgaria, the poorest country in the E.U., has many problems. Boiko Borrisov, a former bodyguard for communist dictator Todor Zhivkov, is officially governing the country with the ‘United Patriots’, a bunch of far-right extremists known for racist, xenophobic and homophobic positions. Chief Prosecutor Geshev is an ally of his as well.

Ahmed Dogan, a former State Security agent, and Delyan Peevsky are two more Bulgarian oligarchs in powerful positions. Many Bulgarians believe they are the ones who are actually running the country. Peevski is a media mogul with a monopoly on the market, a businessman in other areas whose companies are said to get many government orders, and an MP of Dogan’s party.

Apart from the corruption, Bulgaria has countless other grave problems hardly anyone is trying to resolve, including poverty, joblessness, catastrophic environmental issues, wide-spread racism and a scandalous discrimination of the Roma minority.

The Bulgarian protesters in Berlin say the European Union and the German Christian-Democratic Union (CDU), Chancellor Angela Merkel’s party, needed to end their support for Prime Minister Borissov. In Berlin and Brussels, he sells himself as a reliable, pro-European partner. According to those who want him to step down, Europe should stop ignoring what he does back home in Sofia.

In Berlin, protests against Borissov and other oligarchs in Sofia started several weeks ago. At Brandenburg Gate, the Bulgarian saxophone hero Vladimir Karparov played for the protesters on Sunday.