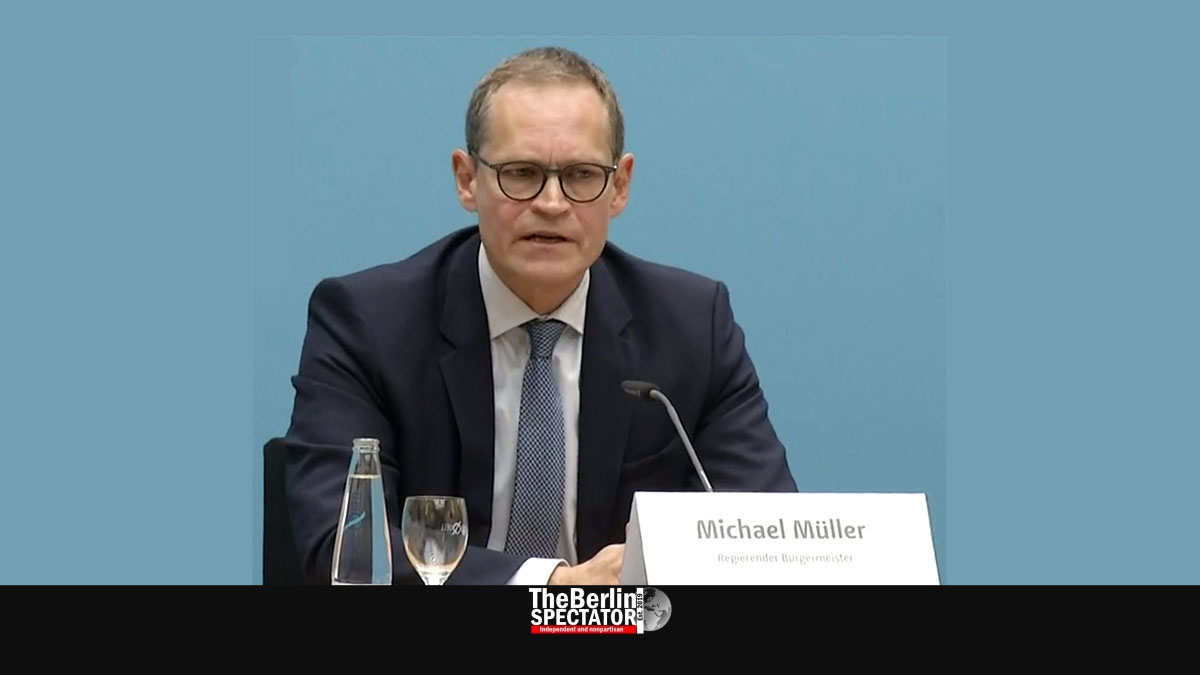 In Berlin, the Senate decided to tighten the anti-Corona regulations yet again. This applies to the mask rule and the contact restrictions.

Berlin, October 20th, 2020 (The Berlin Spectator) — In Berlin, masks will have to be worn at certain locations outdoors as well, because of the increasing number of Corona infections. This new rule will apply to ten streets in the city, as well as outdoor markets, malls and waiting lines. At Christmas markets, visitors will have to wear masks too.

These are the streets on which masks will have to be worn:
> Kurfürstendamm
> Tauentzienstrasse
> Wilmersdorfer Strasse
> Friedrichstrasse
> Altstadt Spandau
> Schlossstrasse
> Bergmannstrasse
> Karl Marx Strasse
> Alte Schönhauser Strasse
> Bölschestrasse

The mask rule was supposed to be a recommendation. But the Senate ended up making it a mandatory rule. With a Seven Day Incidence Number of 89.2, and 822 new infections within 24 hours, Berlin is one of the main Corona hotspots in Germany. Dilek Kalayci, Berlin’s Health Senator, said a general recommendation for all crowded places in the city was part of the decision taken today too.

Berlin is also tightening its contact restrictions. Outdoors, up to 25 people are allowed to gather for private events. Up to now, the limit had been 50. In private homes, one household may welcome up to five people, or an unlimited number of guests from one other household.

“We are in a worrisome situation”, Governing Mayor Michael Müller said at a press conference. Apart from lockdowns, politicians did not have too many options left, he explained.

Müller was visibly angered about attempts by bar owners to get rid of the curfew that was put in place last week, by suing the city state of Berlin. He stated, opening bars or pubs just an hour longer could change the occurrence of infection, also because their guests would go back to their families and into their offices afterwards, where they might pass on the Coronavirus.

Müller stressed this could be the last chance to avoid a lockdown. He stated each individual could make a difference by following the rules and decreasing contacts temporarily. He also announced Berlin would create a statutory basis for the curfews it had put in place.

Since last week, all restaurants, bars and pubs in Berlin need to close from 11:00 p.m. to 6:00 a.m.. No businesses are allowed to serve or sell alcoholic beverages during those hours. Eleven bars are exempt from the curfew right now because a court lifted the restriction for them, but the alcohol ban applies to those bars too, as it does to the entire city. More court cases of this kind are pending.

New rules like the ones the Senate came up with today usually apply from Saturday, because they have to be announced in Berlin’s official bulletin first.

What the Corona situation in Berlin’s districts is concerned, Neukölln is still the one with the highest Seven Day Incidence Number. It stands at 188.5. From a level of 35, the first alarm bells go off. In Mitte, the value is 143.9, Friedrichshain-Kreuzberg reported 136.4 and Tempelhof-Schöneberg 113.1. The other districts stand between 31.9 (Marzahn-Hellersdorf) and 98.4 (Charlottenburg-Wilmersdorf).

Neukölln lost its status as the spot with the highest Incidence Number in Germany to Berchtesgadener Land county, where it exceeded 250 yesterday. This region in Bavaria is under a new lockdown already.