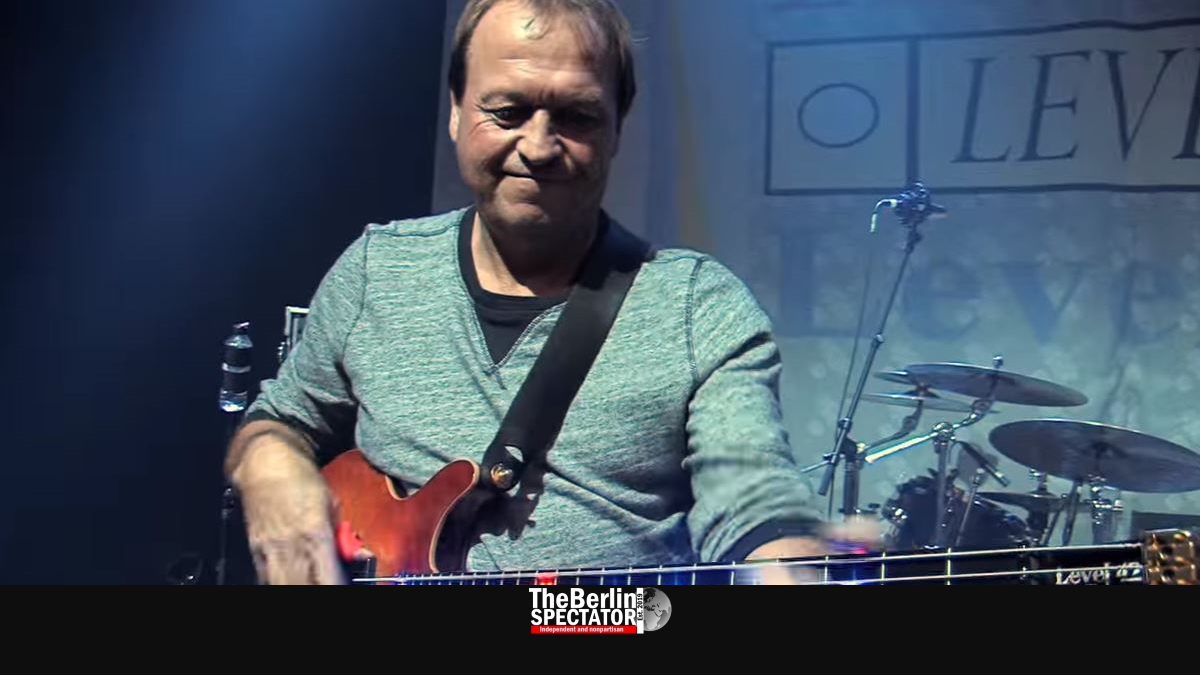 There are bass players and bass players. Mark King from the Isle of Wight in Britain is definitely part of the second category. The slap bass master founded the legendary band Level 42.

October 20th, 2018, updated on October 20th, 2020 (The Berlin Spectator) — When the self-titled album of Mark King’s band Level 42 was released in 1981 and tunes like ‘Love Games’ or ’43’ came through powerful loudspeakers in the community room of a boarding school in southern Germany, everyone was stunned.

There he was, the European version of the late Louis ‘Thunder Thumbs’ Johnson. That ‘right in the face’ kind of Funk, the off-beats the group came up with, and the entire approach, including that record cover, were simply sensational. People danced to Level’s sounds like crazy. One student even painted an over-sized version of one of the band’s record covers on the hood of his old Alfa Romeo.

But the whole thing started a lot earlier, when Mark King, who originally was a drummer, met another drummer by the name of Phil Gould on the Isle of Wight in 1974. They were teenagers, and Gould was impressed: “He was so much faster than me.” The rest is history.

They would take a long ride into stardom together. One of the two drummers would pick up the bass soon: Mark King, the multi-instrumentalist. Phil Gould: “He was one of those natural musicians.” And he still is today.

King would experiment with synth sounds and with slapping that bass. In London, he had an excellent teacher: The late Paul ‘Tubbs’ Williams, who was a member of the Jazz-Funk group Light of the World and co-founder of Incognito, yet another British Jazz-Funk act. According to Incognito members, ‘Tubbs’ taught Mark a whole lot about handling that bass and “slapping the shit out of it”. Somehow slapping was in Mark King’s genes.

Let’s go back to 1981. After the big success with the first album, Level 42 needed a quick follow-up recording. ‘The Early Tapes’, with material recorded two years earlier, before the ‘big bang’, included more killer Jazz-Funk tunes. ‘The Pursuit of Accidents’ followed, and ‘Standing in the Light’, which the band really was by now. Level 42 started touring endlessly, while releasing an album per year, and they sounded brilliant to Jazz-Funk lovers, but also to clubbers and definitely to bass enthusiasts. Did anyone say “solo album”? Hell, King really killed it on ‘Influences’.

Mark King wanted more. According to interview statements in documentaries, he walked up to his manager one day and told him he did not want to be the best bass player on Earth, but the richest one. That wish would become reality at the cost of the brilliant Jazz-Funk approach Level 42 was known for.

Turning Away from the Funk

In 1985, ‘World Machine’ was released. The band had drifted towards Rock and Pop more and more, enlarging its global fan base substantially. But, the coin had a flip-side: The Gould brothers, Phil and Boon, had enough. They had started “playing music I was not interested in at all”, Phil Gould once said.

Many recorded tunes might have been hard to digest for Funkateers. But Mark King was still Mark King. Just one of his killer slap bass solos always justifies driving 100 kilometers to their next gig, and another 200 kilometers to the concert after that one.

Of course the Funk never completely left them. ‘Forever Now’ is a good example. Released in 1994, that album contained a title track which had the Pop, the radio compatibility and the Funk, all in one. An original band member, the brilliant keyboarder and vocalist Mike Lindup, sang ‘Love in a Peaceful World’, a breathtaking track which sounded as if it had been part of their early stuff.

Lindup, who is not only a master but a very kind ‘bloke’ too, returned to Level 42 after a long break some 15 years ago. He is still with them today. Mark’s brother Nathan King has been Level’s guitarist for a long time now. Sean Freeman on sax is another regular member. What their drummers are concerned, Level 42 are forced to switch relatively often, probably due to scheduling issues. Gary Husband, a multi-instrumentalist as well, has been in that position a lot. More recently, Pete Ray Biggin took over that part.

In 2007, Level 42 came to hit my festival stage in Sofia, Bulgaria. It was the first time I met Mark, not counting experiencing him on stage a few times, two decades earlier. He is a funny guy and a ‘big mouth’, who delivered an extremely professional gig at the National Palace of Culture, in front of some 2000 people. As a concert booker, I also sent them to an open air gig in Germany.

Level 42 had die-hard fans in Bulgaria even before the Iron Curtain came down in 1990. When the country still had its communist dictatorship, Kiril Peltekov Stamely’s band Forte covered some of their tunes, including ’43’.

At the after show party in 2007 I asked Mark whether he wanted to hit the stage. He shouted at me: “What part of ‘no’ don’t you understand?” But 10 minutes later, he sat behind the drum set anyway, delivering yet again, along with Bulgarian masters. What a sensational night!

Mark King, who will be celebrating his 62nd birthday on Tuesday, October 20th, 2020, is brilliant, as we all know. But from the perspective of a Funk fetishist, he is also the guy who abandoned the Funk along the way, at least in part. Well, there are always those classic recordings. And the solos on stage. On top of it all, there are more recent Funk highlights Level 42 delivered, such as ‘Sirens’.

A happy and funky birthday to Mark King. Let there be Funk!