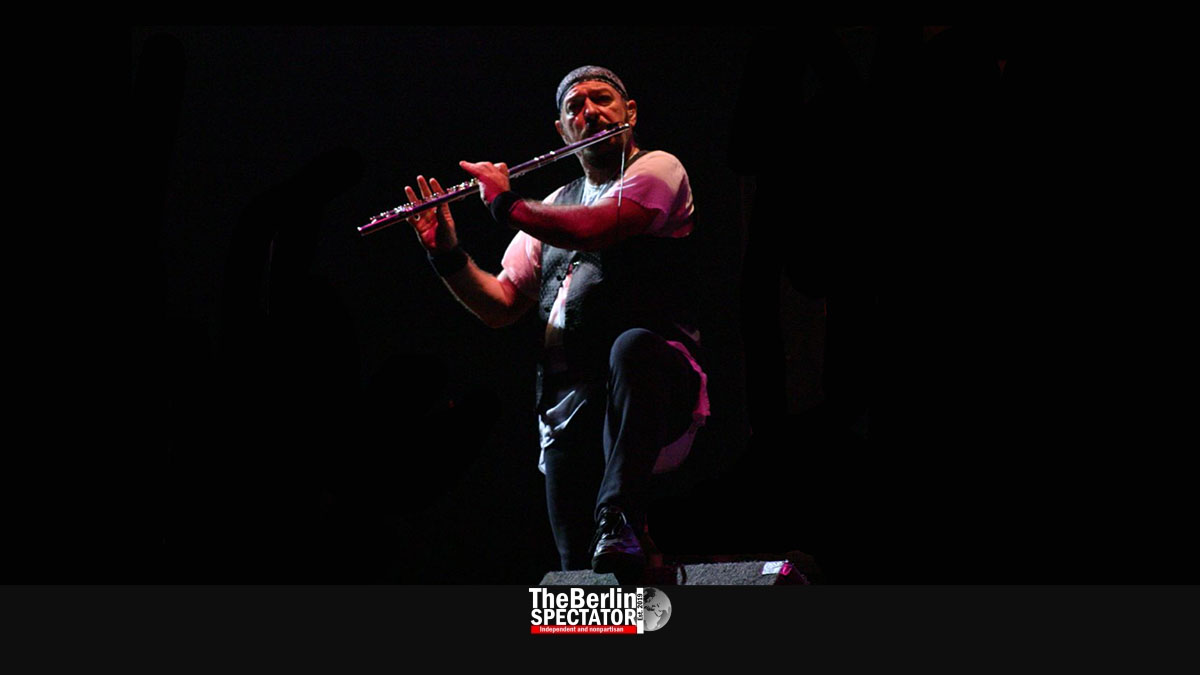 One of the most unique bands on this planet is one of the oldest ones as well. Jethro Tull have been active, with the exception of little breaks, since 1967. And they are getting ready for a European tour.

Berlin, October 21st, 2020 (The Berlin Spectator) — On February 21st, 1741, Jethro Tull passed away after a long life during which he contributed a lot to progress in agriculture. In 1700, he perfected the horse-drawn seed drill. Neither he, nor the horses who pulled those drills, knew that his name would still be famous 230 years later, for something completely different. During Tull’s lifetime, neither Progressive Rock nor Jazz-Rock had been invented.

Jethro Tull, the band named after the late hero of agriculture, was founded when many of us were still wearing diapers, namely in 1967, by the Scotsman Ian Anderson, a multi-instrumentalist, vocalist, composer and producer, and three fellow musicians. Anderson’s main instrument is the flute. This aspect alone makes him unique along with his band.

When was the last time you heard a famous Prog Rock band use a cross flute? In Jazz, a genre Ian Anderson touches a lot as well, the late Dave Valentin, the late Herbie Mann, the brilliant Hubert Laws, Althea Rene, Sherri Winston and others can be named. In Rock, things are different until today. But let’s stop trying to put Jethro Tull into any genre drawer. These attempts do not lead anywhere.

Yes, Ian Anderson still tours with Jethro Tull, 53 years after the group’s foundation, which by the way happened when he was 20 years old. How old does that make him? A. 33, B. 53, C. 73 or D. 123? While you try to figure it out, I will listen to ‘Bourée’, a stunning, jazzy piece based on Johann Sebastian Bach’s ‘Suite in E Minor’.

Bach composed the original between 1708 and 1717, when Jethro Tull, the agriculture expert, was busy helping the British Agricultural Revolution succeed. Ian Anderson and Jethro Tull recorded their version in 1969. At that time, theJacques Loussier and the Dutch band Ekseption were probably the only fellow musicians crazy or genius enough to jazz up classical music.

Little Story In Between

Hey, if we continue this piece at the pace we started it, we will never finish the damned thing. Let’s mention two of Jethro Tull’s twenty-three albums. ‘Aqualung’ and ‘Thick as a Brick’, released in 1971 and 1972, respectively, were the kind of records anyone who knew anything about contemporary music had in their shelves. Everyone dug ‘Locomotive Breath’ and countless other tunes delivered by Ian Anderson, guitarist Martin Barre and many fellow band members who joined and left over the years.

Oh, by the way: How about two little stories in between? Here we go:

IAN ANDERSON APPEARS IN GERMAN DOCUMENTARY
Well, it is what the title already says. ‘A World Without Beethoven?’ is the title of the documentary that was aired by Deutsche Welle TV in September. Who was one of the people they interviewed? Take a deep guess. No, it wasn’t Beethoven himself, but none other than Ian Anderson who talking about the Fifth (not the Fifth Amendment, but the Fifth Symphony).

By the way: In the past months, Ian Anderson was all over the screens. Even Dan Rather interviewed him.

HOW TO PISS OFF JETHRO TULL
Ian Anderson of Jethro Tull is a perfectionist, who has been recording and touring for the past 53 years. When I ran a big Jazz festival in Bulgaria some years ago, I would have given him a luxury hotel, but I was not the promoter. Decisions of this kind were taken elsewhere. Well, at first, Ian complained the restaurant was “shit”. So was the hotel. The legendary flutist was not exactly amused either, when the vehicle we used to take them to the venue in Plovdiv broke down after 50 kilometers on the freeway. By that time, he was pissed indeed.
There was another issue: A huge thunderstorm had just been announced. This meant we had to move the gig from the wonderful amphitheater in Plovdiv to the city’s brand new fair hall. It was quite an endeavor to move the entire gig within a few hours. What we did not know was the fact that the brand new roof was leaking. So we had equipment worth close to a million Euro on a stage it rained on.
Ian Anderson did not like the situation too much. This applied to the catering as well. There he was, shouting down at me from the stage: “Get me the f*cking promoter right now! This is too much! I will cancel the f*cking gig!”. He didn’t. While absolutely nothing turned out properly behind the scenes that day, the gig itself was brilliant, as expected. The next day, Ian came up to me at the airport. He apologized. So did I. Things were fine again.

To make a long story shorter: Jethro Tull will be touring once the f*cking Coronavirus is hopefully back where it belongs, name in hell. So, in January of 2021, the band is scheduled to invade Finland and Russia. On March 6th and 7th, 2021, they will perform in the Swiss cities of Lausanne and Biel-Bienne. Brazil is next.

Hungary, Slovakia and Sweden are next, in April and May. Then, in July of 2021, they will hit yet another country with a big fan base. In Germany, Schwerin, Leipzig and Dresden are listed on the touring plan on July 29th, 30th and 31st.

After covering pretty much the entire United Kingdom in September of 2021, Jethro Tull will be returning to Germany in October. They are scheduled to hit stages in Berlin (!!), Bremen and Hamburg on October 6th, 7th and 8th, 2021. In late November, they will raise roofs in Zurich and Lugano, which were two more Swiss spots last time we checked.

Tickets for some of Jethro Tull’s German gigs are available here. Their full touring schedule is accessible on their website. Amen.

Photo at top of page by Brian Marks (altered, view license CC BY 2.0)