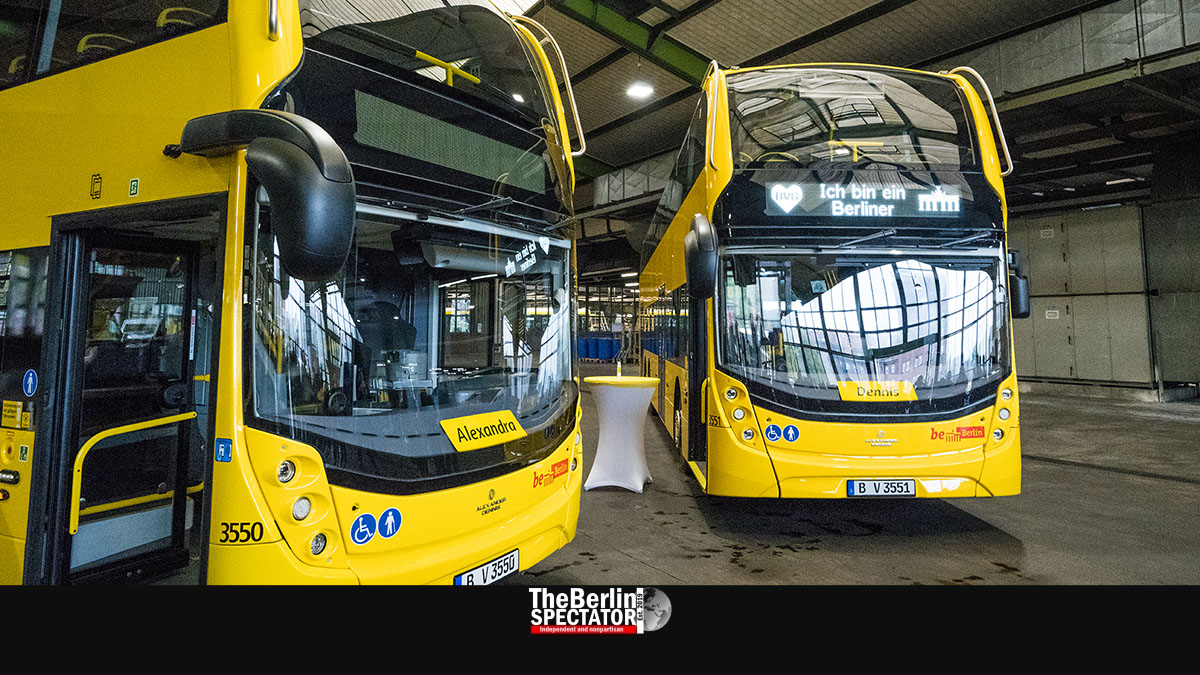 Big and yellow. Let’s see. Is it Big Bird from Sesame Street? No? Is it a giant bottle of lemonade? No? So, how about the Sun? No, again? What is it then?

Berlin, October 22nd, 2020 (The Berlin Spectator) — Berlin has a new star. Actually, there are two of them. In spite of Brexit, the German capital went for Scottish products, namely the world’s bestselling double-deck buses, according to their manufacturer Alexander Dennis. The model the BVG, Berlin’s main public transport provider, chose? It had to be the Enviro 500, of course.

Many Horses and Doors

Apart from being big, yellow and Scottish, they carry 112 passengers who will be able to enter and leave the vehicles through three doors, and climb to the upper deck via two stairs, in front and in the back. The buses’ 8.9 liter 6-cylinder Euro 6 Diesel engines have 370 horse powers. That should be enough to pull away Red City Hall if necessary.

The Berliners obviously spared no expense. Those moving bathtubs are “fully air conditioned”, the manufacturer promises. Half-way air conditioned double-deckers would not have sufficed. Their state of the art heating system might not be needed much, because of global warming, but it is good to know it is there.

Berlin’s two giant boxes also have a fancy interior illumination the color of which adjusts to the outside temperature. We have no idea what exactly this means, but it definitely sounds good. Giant onboard monitors will show passengers where they should get off — or where they should have gotten off an hour ago.

Hey! The stairs have built-in LED lamps. If that does not impress you, what will? On top of it all, these new buses have a multifunctional compartment in the middle of the lower floor. It will accommodate two wheelchairs, several strollers or 2,000 Ravioli cans. All details, including the surface of the grabpoles next to the doors, were thought through. Nothing about this huge yellow present is random, it seems.

USB Chargers for All

Let’s finally get to the best part: The BVG’s new toys have USB charging sockets. Those are not just for the driver, but for everyone. The only things those Scottish vehicles are not equipped with? Well, they do not come with massage seats, bars or bass woofers for monotone Techno sounds. But at least the manufacturer managed to install the steering wheel and dashboard on the right side, namely the left.

Before the first two fancy Christmas presents hit the streets of Berlin on bus line 100, they will have to be configured. BVG people will need to plaster their inside with useless stickers, program the routes and test the microwave and the kickdown. Have a good trip. That’s an order. And please remain seated until the big yellow thing has come to a complete halt.