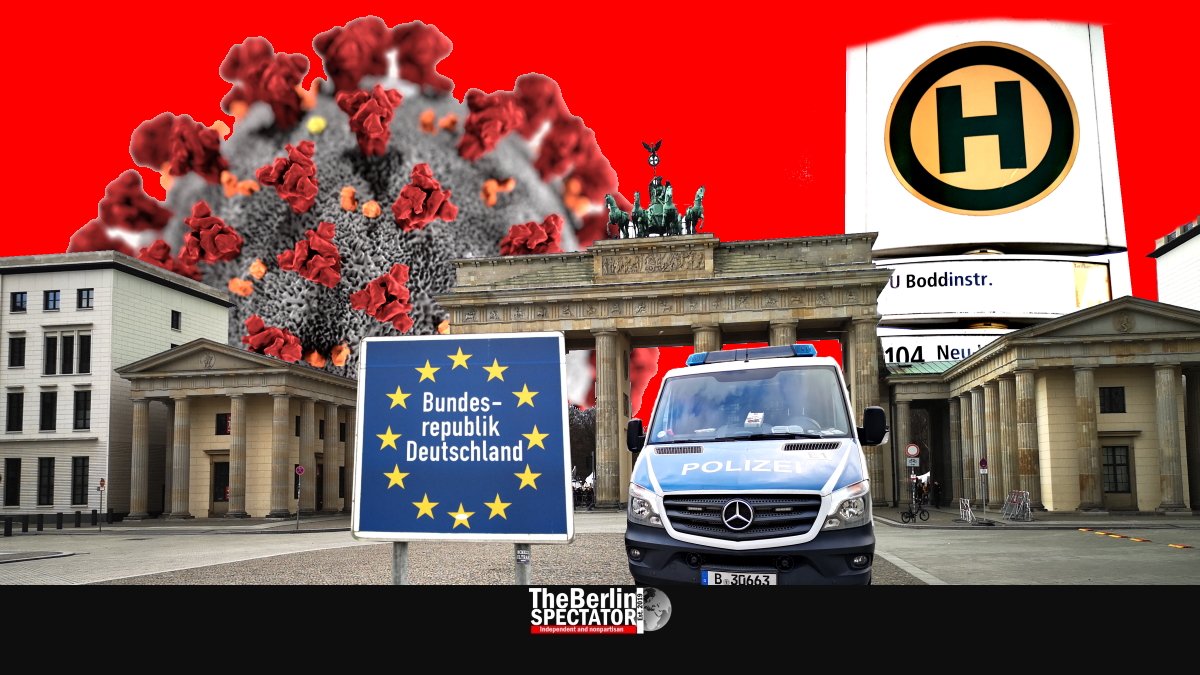 Compared to the summer, forty times as many new Corona infections per day are now being reported in Germany. The entire country is now a high risk region. Berlin remains one of its main Corona hotspots.

Berlin, October 22nd, 2020 (The Berlin Spectator) — In Berlin, the Robert Koch Institute, which is the German equivalent of the CDC in the United States, reported more than 11,000 new Corona infections within one day on Friday. According to Johns Hopkins University, 12,331 new cases were reported by the health authorities and hospitals between Wednesday morning and this early morning.

Again, this is the highest number since March and April, when Corona hit for the first time. Recently, Chancellor Angela Merkel had predicted that the number of new infections could rise to 19,200 per day. It was a mathematical scenario based on the growth back then, one which Germany is not so far from anymore.

The alarming situation in the Federal Republic also becomes evident by looking at the country’s Seven Day Incidence Number which shows how many new infections there were per 100,000 inhabitants in the past seven days. For Germany, that number now exceeds the critical value of 50.

Five more districts in the German capital are above 100 by now. They are Mitte (171.1), Tempelhof-Schöneberg (140.7), Friedrichshain-Kreuzberg (139.1), Charlottenburg-Wilmersdorf (104.5) and Reinickendorf (101.7). The rest of Berlin does not look good either. Only two districts, namely Lichtenberg and Marzahn-Hellersdorf, are below 50, for now.

Berlin, the city as a whole, has a Seven Day Incidence Number of 104.4, which is a worrisome development. In neighboring Brandenburg province, things are turning south as well. The federal state already has two Corona hotspots, namely Cottbus and Spree-Neisse county.

But nearly all regions in Germany are reporting high new infection numbers. One of Germany’s smallest federal states, Saarland, just reported the highest number ever. With 217, it even exceeded the values reported in March and April.

In Baden-Württemberg, a large federal state in Germany’s south-western corner, the Incidence Number now stands at 53.4. According to a recent decision taken by Chancellor Angela Merkel and the First Ministers of all sixteen states, this kind of situation should trigger decisive action. It is unclear what the government in Stuttgart will come up with.

On Wednesday, Germany’s Health Minister Jens Spahn tested positive for Corona just after he had taken part in a cabinet meeting with Chancellor Merkel and many colleagues of his. Before the meeting, the talked to Family Minister Franziska Giffey, face to face. Both of them wore masks at that moment. Still, Minister Giffey underwent a Corona test, as a precaution. The first one turned out negative.

Yesterday, Jens Spahn had informed Mrs. Merkel about his infection just before it was announced in the news. According to a government spokesperson, the Chancellor wished him a speedy recovery. Spahn is the first and only Federal Minister in Germany who tested positive for Corona.

Via Twitter he said he was at home, in isolation, and had only cold symptoms. He said he wished all persons he had been in contact with that they would stay healthy. “Let’s take care of one another!”, Spahn wrote.