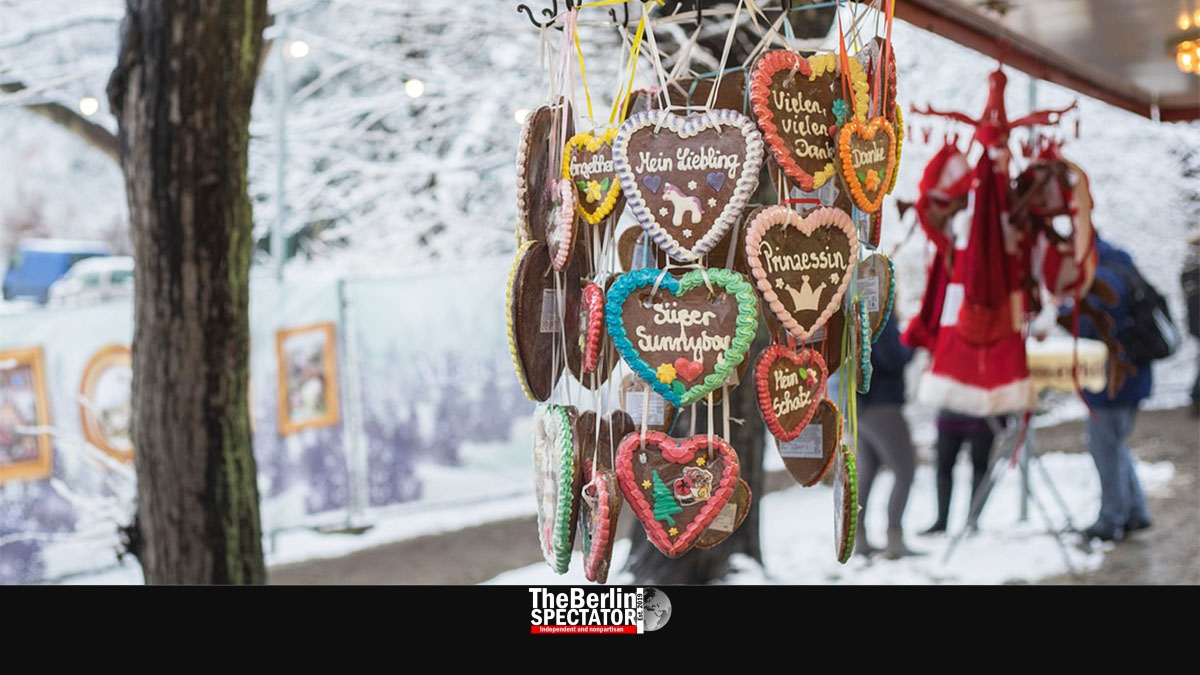 Because of Corona, many Christmas markets in Germany were cancelled. One was reannounced after it had been cancelled first, others are supposed to be scaled down. This is what the Corona Christmas market situation will look like.

Heidelberg, October 23rd, 2020 (The Berlin Spectator) — Germany is a predominantly Christian country with many nice traditions. One of them, the Christmas market, has spread around the world. Bogotá and Boston have German Christmas markets. So do Cincinnati and Chicago. You name it. But, of course, the nicest ones are right here in Germany.

Nuremberg’s Christkindlmarkt is the most famous one. But they are all over the place. In order to build a Christmas market, you need little wooden stalls full of Christmas treats such as ‘Schmalzkuchen’. They are fried lard cakes. Or how about glacéed apples and almonds? Swiss melted cheese, sausages of all kinds and hot wine punch are obligatory.

Add more wooden stalls with all kinds of potential presents, including woolen sweaters, gloves and scarfs, toys made out of wood and candle carrousels. Oh, we almost forgot fancy Christmas tree decoration in all colors of the rainbow. It’s all there, at proper Christmas markets.

Ideally, Christmas markets should be white. Bing Crosby was definitely right about that. In northern Germany, there has not been snow in ages, except for some flakes here and there that would melt before they even hit the ground. How disappointing.

Now take the disappointment about snowless Christmas holidays and multiply it by a thousand. This is how we get to the kind of frustration the Corona pandemic is causing in this regard right now. The higher the exploding number of new infections gets, the lower the probability Germany’s Christmas markets will actually take place.

In Berlin, the numbers are exploding. The German capital could get another lockdown any time now. But the Carny Association cannot wait to set up the Christmas market it organizes at ‘Breidscheidplatz’ square in the western city center anyway. They are so keen to get it going, they even organized a ‘Fall Fest’ which is something like a pre-Christmas market.

It sort of looks like a Christmas market, it smells and tastes like one. In late November, they intend to convert it to a real Christmas market. Because of the elephant in the room, they agreed to slash the number of stalls in half. There used to be 200 of them. This year, there will be 100 only, for a good reason. The idea is to thin out the crowds. In the meantime, one of the nicest Berlin Christmas markets, the one at Gendarmenmarkt, was just cancelled completely.

Yes, Corona is decreasing the size of one of Berlin’s most famous Christmas markets. If things do not improve, they might have to be cancelled. But, obviously, this is an option absolutely nobody in Berlin prefers. A mandatory mask rule for Christmas markets in Berlin already applies, two months before the actual holiday.

In Bavaria’s Central Franconia region, only “some Christmas markets” are supposed to take place this year, according to the municipalities. The same applies in Brandenburg. Some markets are supposed to be cancelled, like the one in Potsdam, others might take place on the basis of Corona concepts. For instance, alcohol bans are being discussed. Christmas markets without hot wine punch? Well, yes.

In Chemnitz, the former Karl Marx Stadt, the big Christmas market was cancelled because of Corona, but then reannounced. It remains to be seen whether another 180 degree U-turn will be necessary because of the infection situation. Hopefully not.

In Hamburg, the ‘Winterdom’, a bi-annual giant funfair the city loves, will most likely be cancelled this year. What the city’s Christmas markets are concerned, no decision has been taken. First Mayor Peter Tschentscher said, it all depended on the occurrence of infection.

In other words: If the numbers are good, it will happen. If they are bad, there will not be roasted chestnuts this year. This is the ground rule that applies in most parts of Germany.