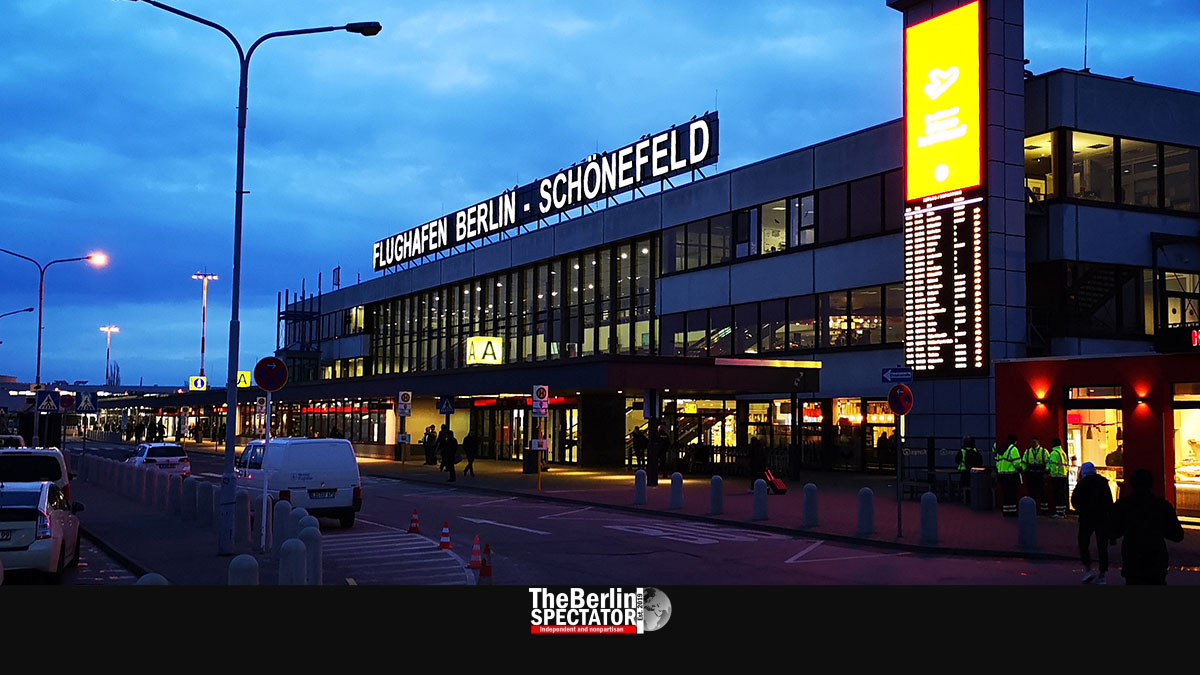 The opening of BER Airport is only days away. Today, one more step towards its inauguration is being taken. Schönefeld Airport is now history.

Ortenberg, October 25th, 2020 (The Berlin Spectator) — Schönefeld Airport has had its own IATA code ‘SXF’ for decades. Now that the old airport is becoming Terminal 5 of BER Airport, the code will be ‘BER’, starting today. What this means is that BER Airport is operational before it is operational. When its new part, Terminal 1, opens on October 31st, 2020, its old part, Terminal 5, will have been in service for six days already. Go figure.

The foundation of Schönefeld Airport dates back to the Nazis. A year and a half after Hitler’s accession to power, in October of 1934, the Henschel aircraft factory was constructed, along with a long concrete runway on its side. Once Nazi Germany was finally defeated in 1945, the Red Army took control in Schönefeld. In 1947, the Soviet Command ordered the construction of an actual airport down there, to the south of Berlin.

But it took a long time. On October 3rd, 1959, the first passenger jet landed in Schönefeld. It was owned by SAS (Scandinavian Airlines). Over time, Schönefeld Airport was extended by the GDR and later by the Federal Republic.

During the Cold War, Schönefeld was the only airport in any part of Berlin which was open to airlines from around the world, meaning the Allies did not ban flights from the West either. But Lufthansa could not land there anyway, because the GDR wanted its own airline Interflug to keep a big share of the market.

West Berliners and other West Germans used Schönefeld Airport anyway. Interflug, Aeroflot and other Eastern European airlines offered destinations Western competitors could not add to their flight plans because of Cold War conditions. Regarding certain destinations everyone offered, Interflug underbid Western ticket prices by up to 70 percent. There was a shuttle bus connection between West Berlin and Schönefeld Airport.

During its last years, Schönefeld Airport had four terminals. They were called A, B, C, and D until March of this year, when they were renamed K, L, M and Q. Terminal K was for EasyJet exclusively, L was used by most airlines, M by Ryanair, Condor and others, and Q for flights that needed more security than others, including those by El Al, the main Israeli airline.

Flying from Schönefeld Airport’s Terminal M to Eastern European destinations was quite an adventure. Behind the security checks, passengers needed to carry their onboard luggage upstairs, before they were being sent downstairs again. Then they had to climb more stairs. In order to get to their gates, they went downstairs yet again. It was a priceless experience every time.

Schönefeld Airport was where a failed escape from the communist GDR began and ended on March 10th, 1970. Eckhard and Christel Wehage, a married couple, boarded a Russian-built Antonov 24 to Leipzig-Halle that day with two small pistols he had stolen from his employer NVA, East Germany’s armed forces.

Once the flight had taken off, the couple threatened a flight attendant and demanded a landing at Hannover Airport, in West Germany. The hijackers did not manage to get through the cockpit door. After a while, the pilots announced they would land at Tempelhof Airport in West Berlin, but actually touched down in Schönefeld, where they had left from just minutes earlier. When the Wehages noticed their plan had failed, they slightly injured the pilot by shooting through the cockpit door, just before they took their own lives.

Today, the Berlin Brandenburg region is losing its second out of three airports. Tempelhof was shut down in 2008, and it will be Tegel’s turn on November 8th, 2020. All three airports, namely Schönefeld, Tegel and Tempelhof, are being replaced by BER Airport. Of course, Schönefeld’s case is a little different because its terminals will live on as part of BER.

Days before BER’s opening date, which is October 31st, 2020, some people involved are so excited they might want to swallow a Valium.

>> All features and articles that have to do with airports