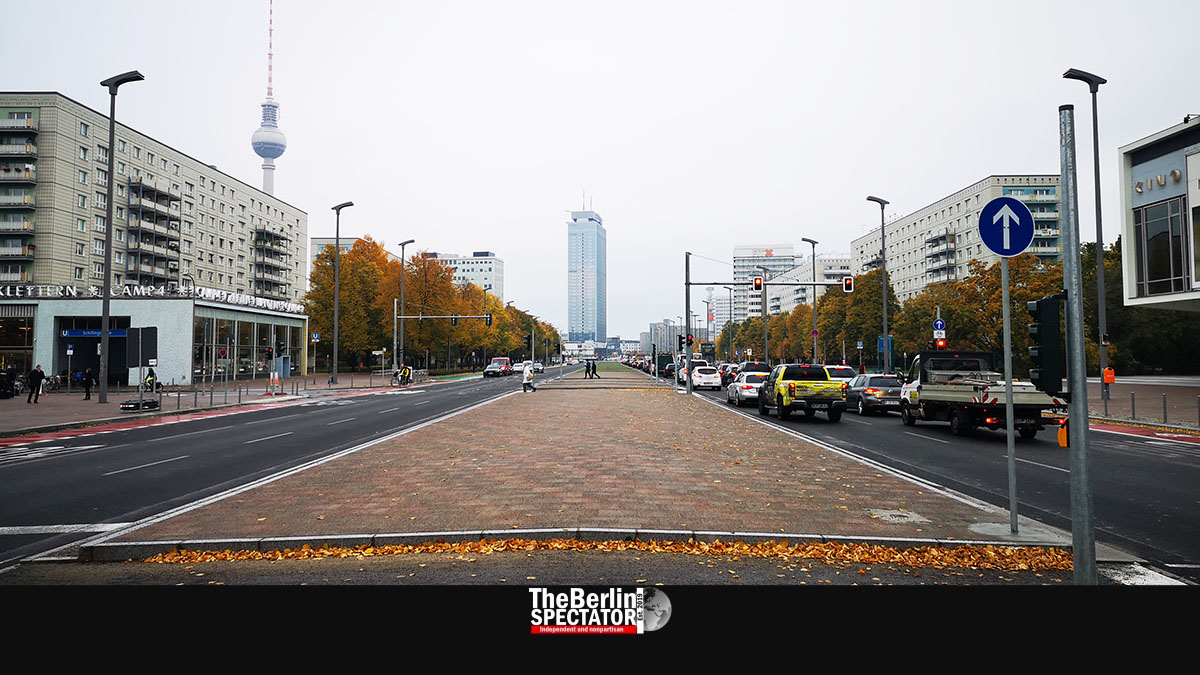 Berlin had parts of one of its most famous boulevards refurbished. All extras are included on the stretch, including “a wide biological diversity” on its median strip and fancy traffic lights.

Berlin, October 26th, 2020 (The Berlin Spectator) — Karl Marx Alle was an important avenue when the city it was located in, East Berlin, was the capital of the communist ‘German Democratic Republic’ (GDR). It used to be called Stalinallee, until the regime renamed it after Karl Marx, whose doctrine was East Germany’s religion.

The avenue was supposed to impress visitors. It was the pride of East Berlin. Parades took place on this wide traffic artery. But so did the East German Uprising on June 17th, 1953. In reunited Germany, there was a long discussion about renaming the boulevard. The Berlin Senate decide to refrain from this kind of step.

Later, a redesign was planned. While an intense discussion about the details continued for a long time, changes were implemented several times. Until recently, Karl Marx Allee, which the Germans write with two hyphens between the three words, had eight lanes for cars. Now that the renovation of the stretch between Otto Braun Strasse and Strausberger Platz is completed, four of those are left.

In each direction, Karl Marx Allee now has an extremely wide bike lane, a parking lane, a bus lane, as well as two lanes for cars, trucks, motorbikes and similar vehicles. In the middle, the avenue’s impressive median strip was supposed to become a parking lot, but the Senate Administration for Traffic changed this plans as well, at the last moment.

According to Henrik Vierarm, the head of the Roadbuilding Department at Berlin’s Senate Administration for Urban Development and the Environment, most of the median strip is now a “grassy area” with “a wide biological diversity”. Apart from the grass, little flowers and insects will be calling Karl Marx Alle home. The plants were already sown, but it will take a while until nature will actually show itself.

Regine Günther, Berlin’s Senator for Urban Development and the Environment, said Karl Marx Allee was “of major importance for the entire city”, also because it was landmarked. What the freshly refurbished stretch had become was very different from the original plans generated in 2016. For instance, it contained low-noise asphalt, an energy-saving illumination and the planted median strip. Even the traffic lights on the newly renovated stretch of Karl Marx Allee seem fancy.

Had the refurbishment been planned now, the result would still have looked different, the Senator stated. Berlin was working on its traffic transition, she said. The Berlin Senate is giving public transport, pedestrians and cyclists a high priority and wants to get rid of as many cars as possible, especially in the city center.

This morning, an impatient driver already damaged some of the seeds on the new median strip. Because of a traffic jam that developed towards the eastern city center, he made a U-turn right across the beet. In case many more motorists follow that bad example, not too much grass will be left.