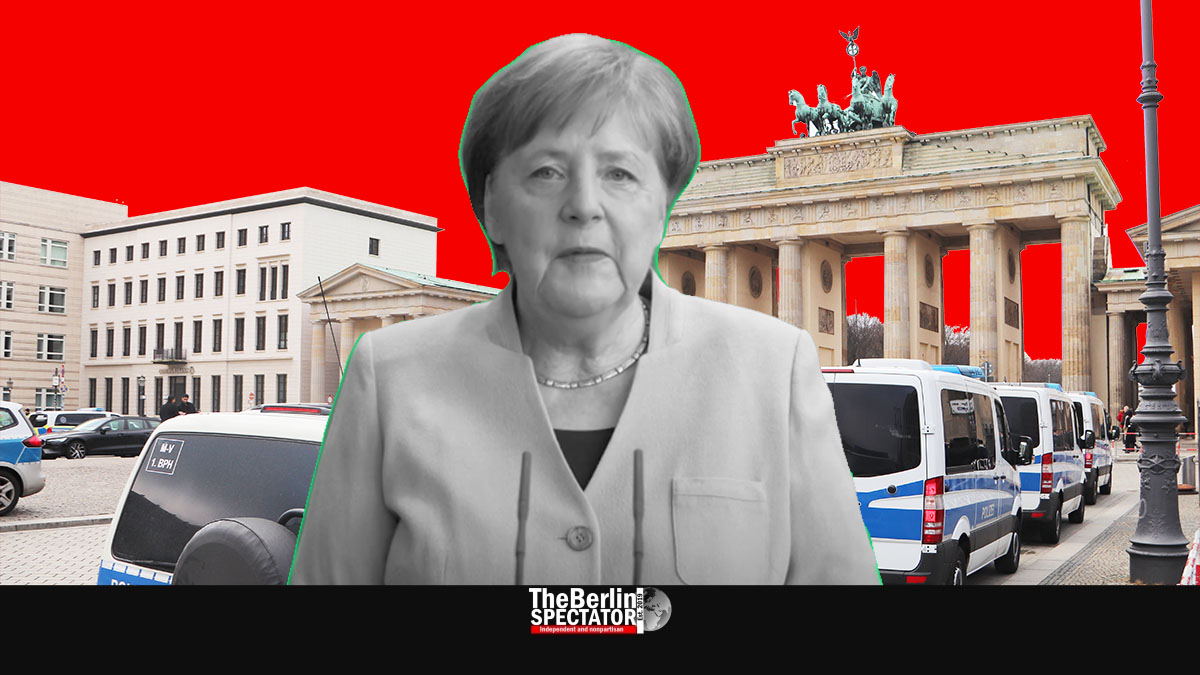 Two hundred and seventy-three days after the first Corona case was confirmed in Germany, good news are rare. In Berlin, Chancellor Angela Merkel asked for discipline while police clashed with Corona deniers yet again.

Berlin, October 26th, 2020 (The Berlin Spectator) — There is no quick solution to the problem on day no. 273 either. Nobody wants another lockdown. That is why the only way to keep the numbers down is “Discipline! Discipline! Discipline!”. According to the ‘Bild’ daily, this was Chancellor Angela Merkel’s message during an online conference with her party’s floor leaders from state parliaments all over the country. “Very difficult months are ahead” Merkel reportedly told them.

Infected himself, Merkel’s Health Minister Jens Spahn spread a video message from home quarantine this past weekend. “Hello, this is Jens Spahn”, he said. This was something everyone knew. He thanked the local health authority and said that amid rising infection numbers and an increasing number of Corona patients at ICUs, everyone’s actions counted. He asked people to download Germany’s ‘Corona Warning App’ and to adhere to the Corona rules.

Police were busy enforcing Corona rules in Berlin. They checked 4,000 pedestrians and other individuals, had 1,000 “prevention conversations”, according to a press statement, and filed 283 infractions between Saturday evening and Sunday morning. Sixty-five restaurants and other businesses were checked along with 301 customers and owners eighty-one of whom got into trouble because they did not wear masks.

In six cases, pub owners violated the curfew, while three ignored the alcohol ban between 11:00 p.m. and 6:00 a.m.. Ten pub owners did not have the required ‘protection and hygiene concept’, one business of this kind was shut down by police officers. Their colleagues were busy dealing with an attack against the Robert Koch Institute with Molotov cocktails, and with Corona deniers who gathered for a rally.

While one protest they had announced was cancelled, another commenced at noon on Sunday, at Alexanderplatz square. From the start, most participants refrained from wearing required masks. They did not keep their distance to others either. Some brawls with police were reported. Several persons were arrested.

As it turns out, the German police are experiencing Corona issues as well. Federal Police Chief Dieter Romann asked his officers to protect themselves from Corona infections in their private life as well. He told them it was their duty to be careful as much as possible. At this stage, 136 Federal Police officers have COVID-19 and more than 1,500 are in quarantine. “When we are absent, the lights will go out”, Romann warned.

The overall situation in Germany is deteriorating. On Sunday, seven cities, districts and counties had Seven Day Incidence Numbers above 200, which makes them the most dangerous Corona hotspots. They were Berchtesgadener Land county in Bavaria, where a lockdown took effect a few days ago, the town of Delmenhorst in Lower Saxony, Berlin’s Neukölln and Mitte districts, Rottal-Inn county in Bavaria as well as Frankfurt am Main and the city of Solingen in North Rhine-Westphalia.

On Tuesday, the Berlin Senate might tighten the Corona rules more. At the Berlin Bundestag, Chancellor Merkel is expected to talk about the Corona situation again later this week.