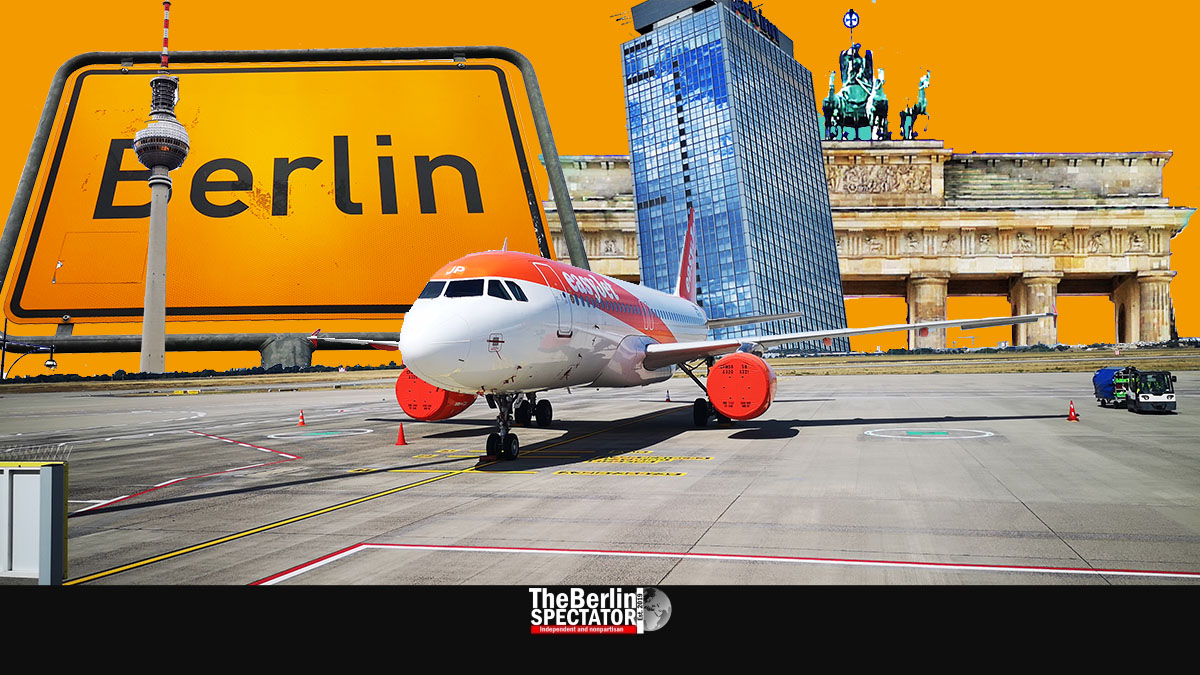 Berlin, October 27th, 2020 (The Berlin Spectator) — Brandenburg province offers a lot more than apple trees and cattle on juicy pastures. How about a state of the art airport? BER is the most sexy landing strip in the world. These are the top 10 ways to get there.

Covering the 25 kilometers (16 miles) from ‘Kurfürstendamm’ in Berlin’s western city center to BER Airport on foot should be a lasting experience, especially with a lot of luggage. This wonderful walk will take at least 5 hours and 20 minutes. The same applies for the hike from BER back to the city. Good luck.

This means of transport will get the duration of your trip down to 1 hour and 46 minutes, if you come in from Charlottenburg. And it will get rid of tons of calories.

Just hop into your Aston Martin, fire up the 8 cylinders and locate the accelerator. Then find the A113 freeway and race towards Dresden. But do not miss the ‘Flughafen Berlin Brandenburg’ exit. In case you need to get to Terminal 5, which is former Schönefeld Airport, get off at ‘Schönefeld Süd’.

Parking at any of the terminals is rather costly. In case you really want to leave your car in Schönefeld while you travel, you can reserve a parking spot via the ‘APCOA Parking’ website. In November, they seem to be offering a 50% rebate.

Getting a taxi is easy. So is maxing out a credit card. A fare of 45 Euro (53 U.S. Dollars or 41 Pounds Sterling) will have to be expected from Kurfürstendamm to BER Airport or vice versa. The same amount will cover a nice dinner for two at a pretty good Berlin restaurant.

The following regional trains go to the new station ‘Flughafen BER – Terminal 1-2’: RE7, RB14 and RB22. Soon, there will be an Intercity train connection as well. From Berlin’s central station, the trip takes 30 minutes.

‘FEX’ stands for ‘Flughafen Express’ or ‘Airport Express’. This new train goes from Berlin’s central station to ‘Flughafen BER Terminal 1-2’ every 30 minutes, via Gesundbrunnen and Ostkreuz. The trip takes 30 minutes.

The S-9 and S-45 come in from Berlin every 20 minutes. The journey from Berlin’s central station takes 50 minutes though.

Take the U7 to Rudow. From there, take the X7 or X71 bus. It stops at all terminals, new and old. From Kreuzberg or Neukölln, this is a pretty good option.

The X7 goes to all of BER Airport’s terminals from the U-Bahn station in Rudow.

The X71 goes from the U-Bahn station Alt-Mariendorf via Johannisthaler Chaussee and Rudow to both terminals.

The BER1 bus comes in from Rathaus Steglitz and the BER2 line connects Potsdam’s central station to BER Airport. It stops in Stahnsdorf and Teltow as well. In these cases, tickets will have to be purchased from the driver. Regular BVG tickets are not valid.

So, you want to go to BER Airport at full throttle? No problem. Fly in, from any European destination. Once and if the Corona crisis is behind us one day, you might also find a few intercontinental connections. For instance, Delta Airlines used to have flights from Tegel to JFK Airport in New York and might resume those.

Related features: Find all articles and features about the airports in Berlin and Brandenburg by clicking here.