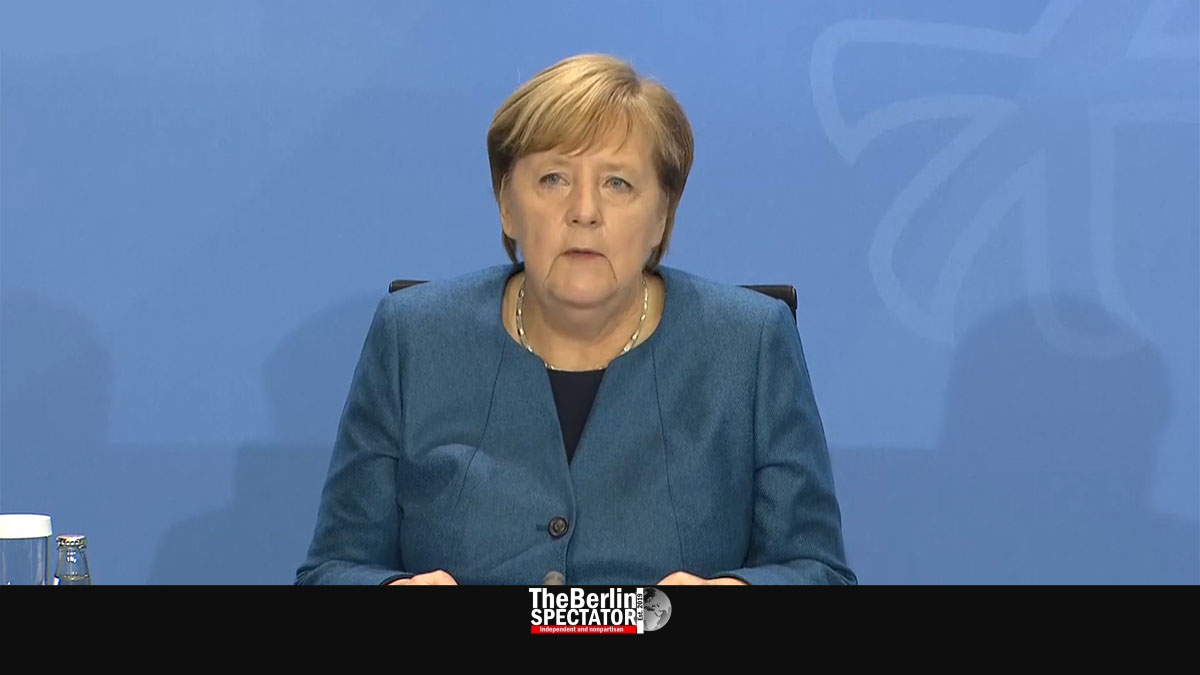 Germany is about to experience its second semi-lockdown this year, starting on Monday, November 2nd, 2020. Pubs and restaurants need to close, new contact restrictions are being put in place.

Berlin, October 28th, 2020 (The Berlin Spectator) — Germany’s Chancellor Angela Merkel and the First Ministers of the federal states have decided to impose another semi-lockdown on the country. They are pulling the emergency brake. Starting on Monday, up to ten people from up to two households will be allowed to meet in public. The lockdown will last all month or until further notice.

Pubs and restaurants will have to close again. Offering takeout food will be allowed, welcoming guests is forbidden. This is a return of the situation in spring, during the first semi-lockdown which helped bring down the alarming number of Corona infections in March and April. The government intends to support the owners of the businesses affected.

Big sports events, such as soccer matches, will be taking place without audiences. In spring, they were cancelled. Now, the professional sports world can at least continue its activities.

One of the big differences between lockdowns number 1 and 2: Kindergartens and schools are supposed to remain open. Education is one of the government’s main priorities. In spite of infections among schoolkids and teachers that have led to quarantines for thousands of them all over Germany, shutting down schools was not an acceptable option for the participants of today’s deliberations.

At a press conference, Angela Merkel said the Coronavirus was spreading extremely quickly. The time it took for the infection numbers to double was decreasing. The same applied to the number of Corona patients who were treated at intensive care units. They had doubled in the past ten days, while the number of those who were on respirators had doubled in nine days.

The Chancellor explained that, at this pace, the German health system would be at its limits within weeks. Therefore, decisive action was necessary right now. “We do not want a national health emergency”, Mrs. Merkel stated. “That is why we need to take measures.”

According to Germany’s head of government, being able to track down the sources of all Corona infections is important. Merkel said that, at this stage, this was not possible anymore in 75 percent of all cases. Flattening the curve was essential.

In spring, the Germans had shown reason and solidarity, Angela Merkel said. The success of the first lockdown in spring had led to a summer during which people had been able to move around more. Now, another “national effort” needed to be taken.

She knew the measures were “hard and burdensome for the entire country”. Keeping the economy going and the schools open had been the two main priorities. Also the acceptance in Germany was an aspect that had been considered.

Private parties in homes or at other locations were not acceptable anymore at this stage, Angela Merkel said. People needed to refrain from private trips that were not necessary. Overnight stays at hotels will be allowed for important reasons only. Tourism is not among the latter. Events for entertainment purposes will be forbidden during the lockdown as well.

As opposed to what happened in spring, all retail businesses may remain open as long as they adhere to the hygiene rules. The service industries may continue working.

Later this week, Commerce Minister Peter Altmeier and Finance Minister Olaf Scholz are supposed to announce details about the support businesses can apply for. Companies of certain sizes can get up to 75 percent of their average income. Angela Merkel also said the government would care for vulnerable groups in the population.

Berlin’s Governing Mayor Michael Müller, who also heads the Conference of First Ministers, said it had been difficult for him to support the decisions taken today. A difficult path had been taken. “We know what this means”, Müller stated.

It was difficult to see how successes that had been reached in Berlin in the past years were in danger because of the measures. But this was about saving lives, Müller stressed. He said, the situation in Berlin’s ICUs was comparable to what had been going on in March and April.

Markus Söder, Bavaria’s First Minister, was part of the press conference at the Chancellery as well. “This is a difficult day we will remember for a long time”, he predicted.