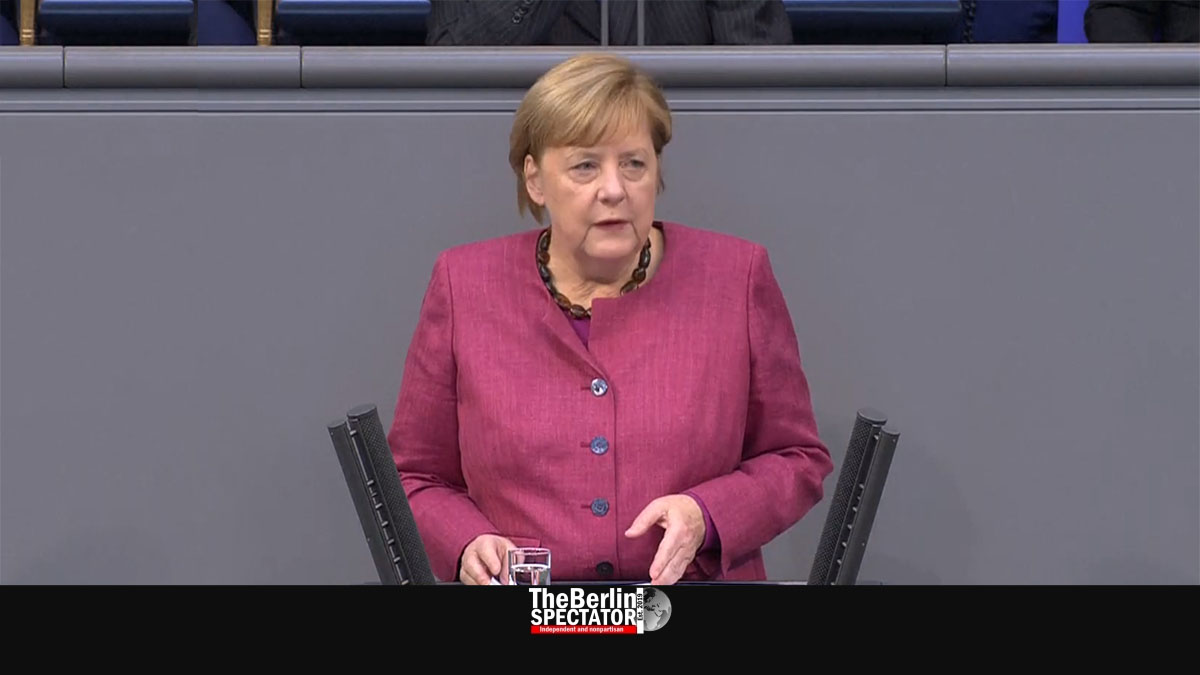 During her government statement, Germany’s Chancellor Merkel said there was no milder remedy than a lockdown. The number of infections needed to be brought down to a manageable level.

Berlin, October 29th, 2020 (The Berlin Spectator) — At the Bundestag in Berlin, Angela Merkel defended the new lockdown she had announced on Wednesday evening. She said the situation was “dramatic at the beginning of the cold season”. Absolutely everyone was affected, without exception. The local health authorities were working at their limit.

Within ten days, the number of COVID-10 patients who needed to be treated at hospitals, and those in ICUs, had doubled within ten days, the Chancellor explained to the MPs. “These dynamics will overburden our health system”, she stated.

Mrs. Merkel said she understood the frustration very well. But hygiene concepts alone did not work anymore in this situation. The lockdown was necessary. “The alternative approaches do not convince me”, the Chancellor of the Federal Republic of Germany said.

She was interrupted by interjections, mainly by MPs who are part of the extremist right-wing party ‘AfD’. The Bundestag’s President, Wolfgang Schäuble ordered them to be quiet and to express their opinions after Merkel’s speech.

There was no milder remedy that could bring the number of new infections down to a manageable level, the Chancellor said. The way things were developing right now, the health authorities were not able to track down the sources of all infections anymore. This aspect contributed to the kind of exponential growth Germany had seen in the past weeks.

The virus was dangerous for risk groups in the population, including elderly people and individuals with pre-existing conditions. Also for these reasons, the measures were “suitable, necessary and proportionate”.

“I we would wait until the intensive care units are full, it would be too late”, Angela Merkel stressed. “We are in a worrisome situation. A populist downplaying would be unrealistic and irresponsible.” This was Merkel’s little sideswipe towards the ‘AfD’ and the FDP that had criticized her harshly.

“It is up to us how things continue”, Merkel stated. The pandemic was a medical, economical, social, political and psychological test for Germany’s democratic society. Angela Merkel also said the support her government was getting in Germany was perceptible in the Bundestag as well.

According to the Chancellor, it is “appropriate, important and vital” to discuss measures of this kind in public and to criticize them. This was part of an open society. On the other hand, lies, disinformation, conspiracies and hatred damaged both the democratic debate and the fight against the Coronavirus.

Angela Merkel said the term ‘freedom’ was gaining center stage in the pandemic, also because the measures announced on Wednesday curtailed freedom. But freedom did not mean that everyone just did what they wanted. Freedom was responsibility as well.

The winter would be difficult, the Chancellor predicted. Four long months were ahead. Everyone could actively contribute by relinquishing unnecessary contacts.