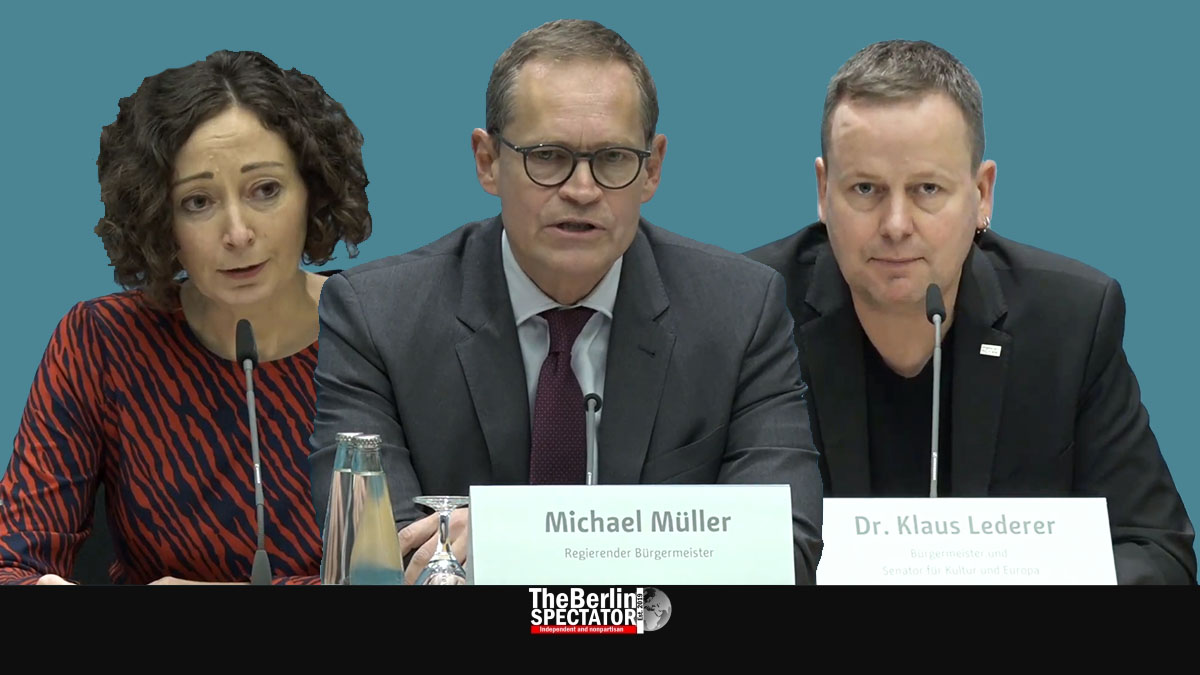 In Berlin, the Senate just announced the new Corona rules for the German capital. Most are based on the measures Chancellor Merkel and the First Ministers from the federal states agreed on earlier this week.

Berlin, October 30th, 2020 (The Berlin Spectator) — Germany’s partial lockdown commences on Monday, November 2nd, 2020 and lasts until the end of November or until further notice. On Thursday evening, Governing Mayor Michael Müller (on photo at top of page, center), Commerce Senator Ramona Pop and Culture Senator Klaus Lederer (both on photo at top of page) announced Berlin’s version of the lockdown rules.

>> People are being asked to reduce their contacts outside their homes as much as possible.

>> In public, the limits mentioned above do not apply to children up to 12 years of age if they are part of one grade or care group.

>> Pubs, restaurants and similar businesses are not allowed to welcome guests. They may offer takeout food though.

>> Cantines are allowed to open. Up to two persons may sit at each table.

>> Facilities that are connected to any kind of entertainment have to remain closed. This includes holiday parks, casinos, gambling halls and betting offices. Berlin’s two zoos may open, but the aquarium at Zoo Berlin and animal buildings at both zoos need to remain closed.

>> Fitness studios, dance studios, saunas, steam baths and similar facilities, as well as areas of this kind in hotels may not open.

>> Touristic overnight stays at hotels and similar places are forbidden.

>> Outdoor events with more than 100 people are forbidden.

>> Indoor events with more than 50 participants are banned.

>> Retail businesses may open. They may welcome up to one customer for 10 square meters of space. The distance and mask rules apply.

>> Soccer matches and similar sports events may take place without audiences on site.

>> People may engage in sports activities on their own or with one more person as long as there is no direct contact and the distance rule is being followed.

>> Children and adolescents are allowed to engage in sports activities outdoors in groups of up to ten persons.

>> Public swimming pools may not open.

>> Christmas markets and fun fairs may not open.

Even before the tenth version of Berlin’s Infection Protection Act was announced, the Senate Chancellery extended the mandatory mask rule to 23 more streets, meaning there are now 33 streets on which masks have to be worn. This applies to pedestrians only.

On the following 23 streets, the mandatory mask rule will be valid from Saturday, October 31st, 2020:

On the following ten streets, the mandatory mask rule was put in place last Saturday:

The latest Corona numbers in Berlin are alarming. In three districts, namely Friedrichshain-Kreuzberg, Neukölln and Mitte, the Seven Day Incidence Numbers are above 200. In seven more districts, they are between 100 and 200. Only two districts, namely Treptow-Köpenick and Marzahn-Hellersdorf, are below 100.

For the entire German capital, the Incidence number is 155.6. More than 1,100 new Corona infections were reported within 24 hours. In the entire country, 22,357 new cases had to be added, according to the latest numbers provided by Johns Hopkins University. The total number of Corona infections in Germany on Thursday morning was 463,555. This early morning, it was 509,329.