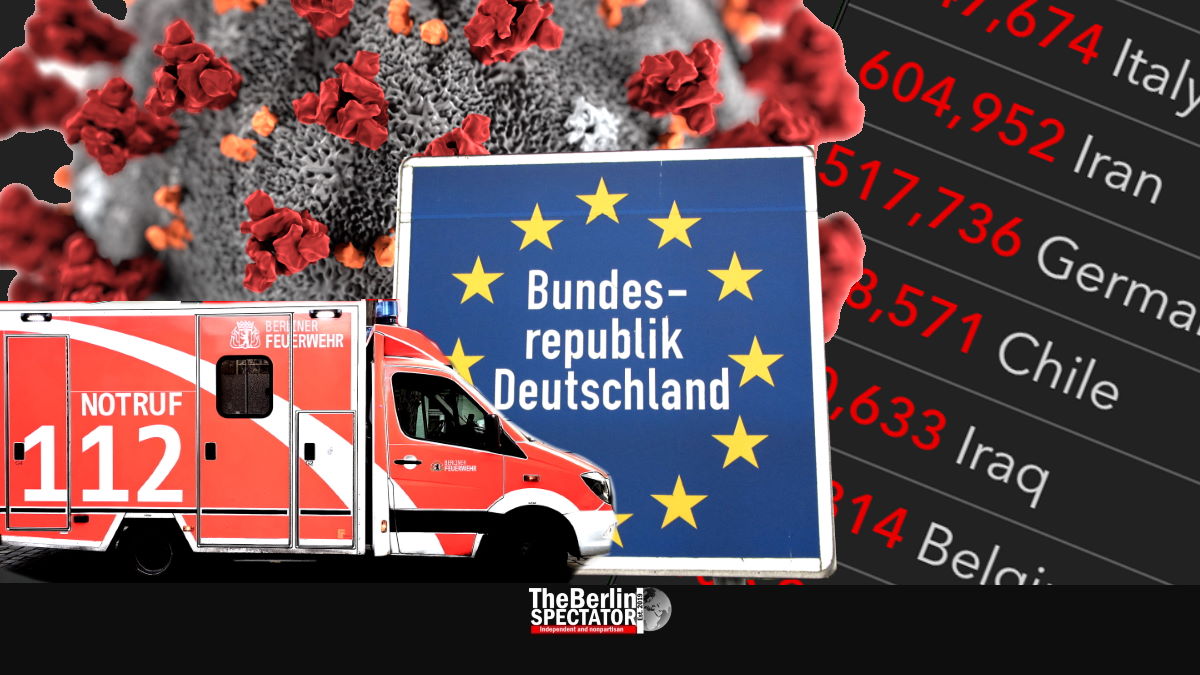 In Germany, the number of Corona patients who are being treated at ICUs is increasing rapidly. In the meantime, tourists are being kicked out of some federal states ahead of the upcoming lockdown.

Berlin, October 31st, 2020 (The Berlin Spectator) — While local health authorities in Germany’s Corona hotspots have lost control, there is a consensus that this should not be happening at the country’s hospitals. Intensive care units are the spots at which there should always be room for emergency cases. At this point, everyone in Germany will get an ICU bed if necessary. The partial lockdown which starts on Monday is supposed to make sure this does not change. Still, precautions are being taken.

Virtually all intensive care physicians who have been interviewed by German media said they fully supported the strict measures the government and the federal states had agreed on earlier this week. On Friday, 1,830 Corona patients in the Federal Republic were being treated at ICUs. That number is increasing rapidly. Within weeks, the hospitals will be overburdened of the trend is not reversed. It is not only about beds and respirators, but also about having enough qualified nurses.

The ‘Hamburger Abendblatt’ daily just quoted Professor Uta Merle from the University Clinic in Heidelberg. She said if the partial lockdown did not lead to a decrease of new Corona infections, the hospitals would lose control. Regarding the pace at which the ICUs were filling up, the situation was comparable to the one in spring, when Corona hit for the first time.

If the number of Corona patients at ICUs keeps on rising the way it is right now, Germany intends to send patients to hospitals with free capacities all over the country. The media published by ‘Funke Mediengruppe’ report, there was a concept paper written by the Interior Ministry in Berlin. It said the “Cloverleaf Principle” would apply in case of emergency. This means Corona patient will be sent to other hospitals within a federal state or in other provinces if necessary.

An increasing number of Corona patients is not the only issue intensive care units in Germany are experiencing. More and more nurses and other staffers are in quarantine themselves because of all the contacts they have with infected persons, in spite of the precautions they take. This is yet another good reason for the lockdown which kicks in on November 2nd, 2020, and will be in place throughout the month.

During the partial lockdown, Deutsche Bahn, Germany’s main train operator, intends to keep on offering its services. The number of passengers will most likely slump, because people are not supposed to travel. The private company FlixBus, which runs a large network of tour buses, said it would cease operations in November.

Several federal states are beginning to send home tourists. Brandenburg’s First Minister Dietmar Woidke said tourists in his state needed to leave by Wednesday. The states of Schleswig-Holstein and Saxony are kicking them out on Monday, Mecklenburg-Hither Pomerania on November 5th. In Lower Saxony, tourists who arrive before November 2nd may stay as long as they please, but none are supposed to come to the state between Monday and the end of November.

On Wednesday, Chancellor Angela Merkel and the First Ministers from Germany’s sixteen federal states had agreed to put in place a new semi-lockdown. Contacts were restricted, restaurants and similar businesses will close on Monday and entertainment events are forbidden. Schools and kindergartens are supposed to remain open.

The total number of Corona infections in Germany since the beginning of the crisis in January was 527,916 this morning, which is 18,587 more than on Friday morning. In Berlin, more than 1,000 new cases were reported within 24 hours. The German capital’s Seven Day Incidence Number is 160.4. All districts are high risk areas. Out of all counties in Brandenburg, Brandenburg, only two are not in the red yet. In Oder-Spree county, the Incidence Number is on the brink of hitting the critical 50 mark. In Märkisch-Oderland, the reported value is 30 and therefore not critical yet.