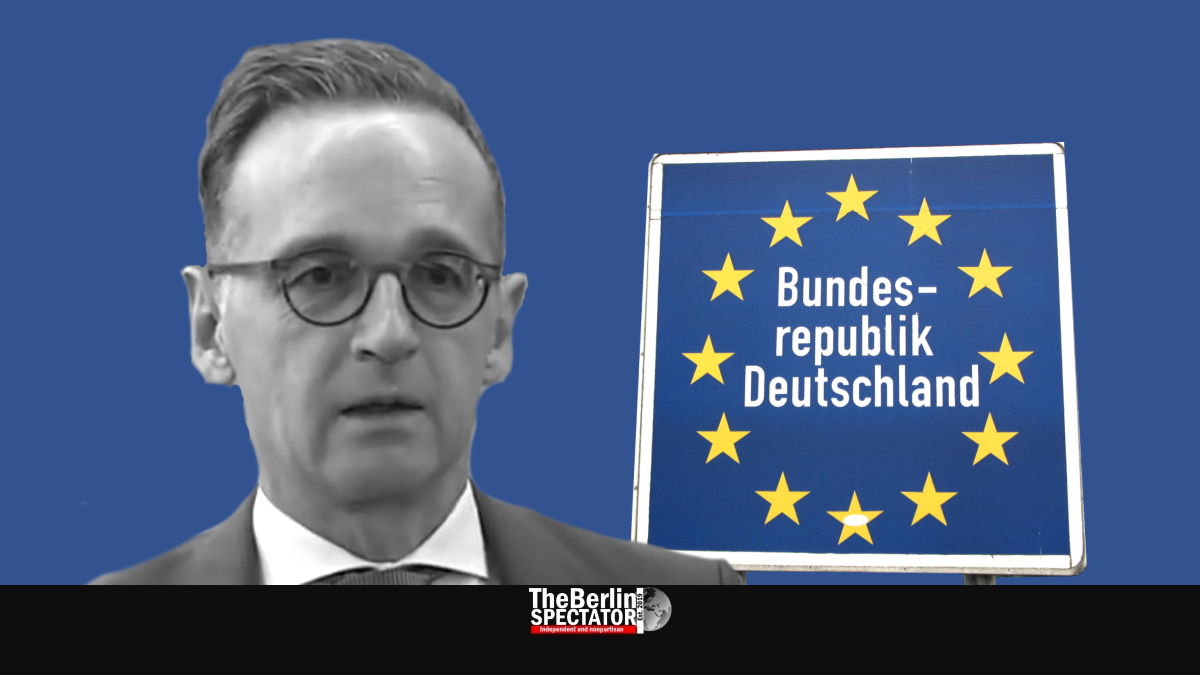 In Berlin, Foreign Minister Heiko Maas announced Germany’s borders would not be closed during the upcoming partial lockdown. But this is the only good news.

Berlin, November 1st, 2020 (The Berlin Spectator) — Germany has borders with as many as nine neighboring countries. They are Denmark, the Netherlands, Belgium, Luxemburg, France, Switzerland, Austria, Czechia and Poland. According to Foreign Minister Maas, those borders will remain open this time around. In March and April, when the Corona infection numbers exploded for the first time, many of them had been closed.

Maas told the ‘Tagesspiegel am Sonntag’ weekly, Germany had collected a lot of experience in regard to border checks. In case more controls would become necessary, it would be helpful. The Foreign Minister said he was sure there would not be long waiting lines at the borders this time around.

In the same interview, Maas said the situation was tense, but better than in some other countries. The restrictions the government had announced were necessary anyway. “We will experience a tough winter”, the Minister predicted. Before him, Chancellor Angela Merkel had used those same words.

On Wednesday, the Berlin government had announced a partial lockdown that will be put in place tomorrow, on Monday, November 2nd, 2020, and last all month long. While kindergartens, schools, and retail businesses will remain open, restaurants, pubs, cafés, theaters, museums, concert halls and other facilities will have to close. A strict contact ban will be in place as well.

In the meantime, the circumstances in Germany’s intensive care units remain a concern. Tobias Hans, the First Minister of Saarland, Germany’s smallest federal state, said in an interview conducted by the ‘Bild am Sonntag’ publication, the situation was “shocking and alarming”. Soon, many of Germany’s 1,900 hospitals might experience “a collapse”.

Just now, at a moment at which each ICU bed was urgently needed, stations were closed, Hans stated. According to him, the beds themselves are not the reason, but the personell. Many nurses are sick or in quarantine. This seems to be the main issue.

‘Bild am Sonntag’ also quoted Uwe Janssens who heads the DIVI, the German Association for Intensive Care and Emergency Medicine. He said only 14 percent of Berlin’s ICU beds were vacant right now. The situation was similar in Bremen. Janssens said things were far more serious now than they had been in March and April, during the first Corona wave.

Corona Deniers on the Streets

In Dresden, Corona deniers and conspiracy theorists teamed up with Nazis again, during a protest against the government’s anti-Corona measures. Many participants reportedly refrained from wearing masks, even though they are mandatory. Criminal proceedings were initiated against three individuals who performed the Hitler salute. The latter is forbidden in the Federal Republic of Germany. Similar protests took place in Karlsruhe, Darmstadt and Braunschweig.

The reporting of new Corona infections in Germany usually slows down on weekends because doctor’s offices and labs do not work. Still, more than 11,000 new infections were added to the list between Saturday morning and this early morning. The total number of Corona cases in Germany now stands at 539,530.