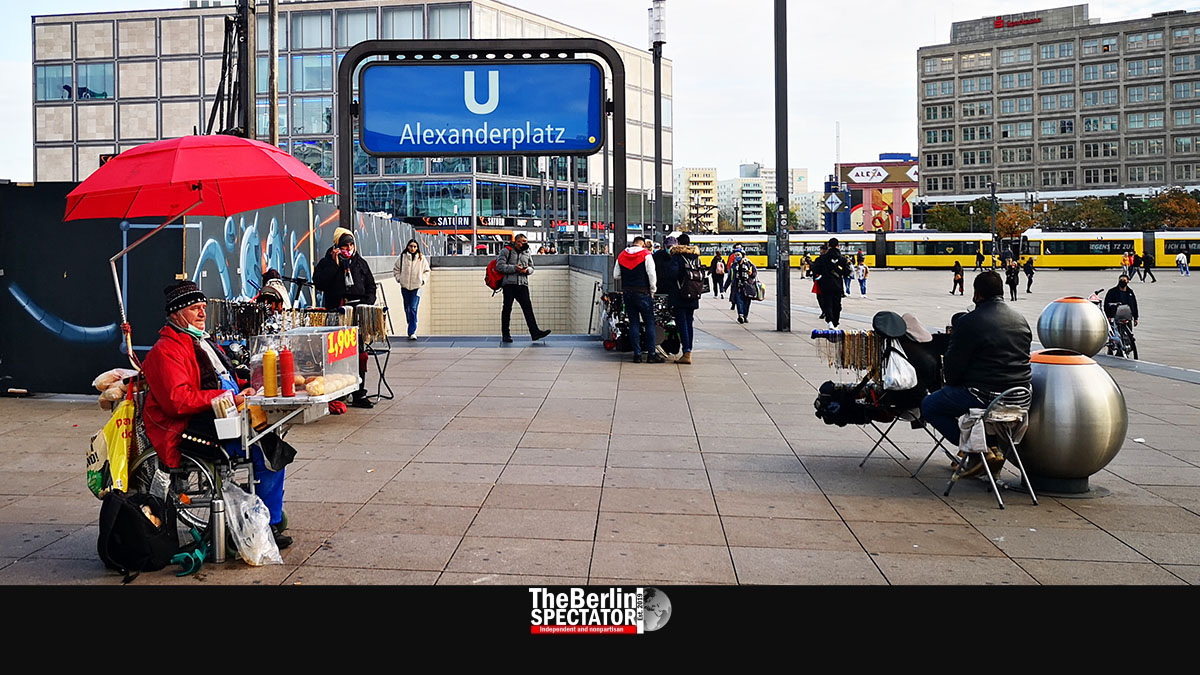 On the second day of the second Corona lockdown this year, Berlin, a city of 3.8 million inhabitants, was more quiet than it usually is. While hardly anyone seemed to want to shop, traffic was almost as tight as ever.

Berlin, November 4th, 2020 (The Berlin Spectator) — To many Berliners, the new partial lockdown is an ambivalent thing. Some really want to continue playing squash or sweat out all of these calories in fitness centers, but understand the need for the measure at the same time. Others already miss their lunch breaks at restaurants on Friedrichstrasse, but do see why they will have to consume self-made liverwurst sandwiches at their desks instead.

Shopping is something Berliners did not seem to be into on Tuesday. Alexanderplatz, the most ugly main square and shopping area in the city, was pretty empty compared to ‘normal days’, if anything of the kind still exists. The Media Markt electronics store located there has seen better days. So has the gentlemen in a wheelchair who sells sausages.

In spite of the situation, a few tourists seem to have made it to Berlin. At Brandenburg Gate, about a dozen of them shot photos. There is not much else they — or anyone — can do in this city these days, except for visiting one of the two zoos or getting takeout food in order to consume it at home or at an ‘airbnb’ place. Actually, even the latter is difficult because hotels and similar establishments are not allowed to accommodate tourists, no matter where they are natives or foreigners.

Considering Berlin is going through a lockdown, traffic was pretty bad in some parts. The conditions on the main traffic arteries did not look like everyone was working from home. Commuters were definitely on their way. So were delivery truck drivers and people who needed to run errands.

Some Berliners seem to be avoiding public transport because of the danger of infection. There are still residents who refrain from using masks where they are supposed to wear them, including on the ‘U-Bahn’ (metro, tube, underground, subway). Sitting in the car and listening to the new Jarrod Lawson album instead is a much better option to many, in spite of the traffic jams on Karl Liebknecht Strasse.

Berlin’s Museum Island was a sorry sight on Tuesday, and empty is what it will be all month long, because all cultural places are closed. Pergamon Museum? Forget it. National Gallery? Nope. Bode Museum? Closed. James Simon Gallery? Nice try, but no.

There are no Vivaldi, Beethoven or Mahler sounds at any concert hall either. There is nothing except for walking around, being at home, eating and sleeping. Restaurants have switched to takeout food sales, including good ones such as the Block House chain. In front of restaurants and fast food places in Berlin, all tables disappeared because sitting at them is forbidden. A year ago, if anyone had told a Berliner this would happen, that person would have been taken to a madhouse.

On a sunny Tuesday, people sat on big lawns in parks. At Hasenheide, a major park in Berlin’s Neukölln district, some people meditated, others read books, played with their children, collected chestnuts, walked their doggies or continued to sell illegal drugs.

Lockdown or not, many Berliners were busy on Tuesday, and still are. They include the 26,000 people employed by the Berlin Police Department. Dozens of officers raided homes of individuals suspected of spreading hate speech online, while others checked the adherence to the Corona and lockdown rules.

At Potsdamer Platz, a pre-Christmas market which had been crowded just 48 hours earlier, was empty. All stalls and a giant slide set up there were closed. This will not change this month, or until further notice. This November, the best activity in Berlin — or anywhere — is to go into hibernation and snore like a bear.