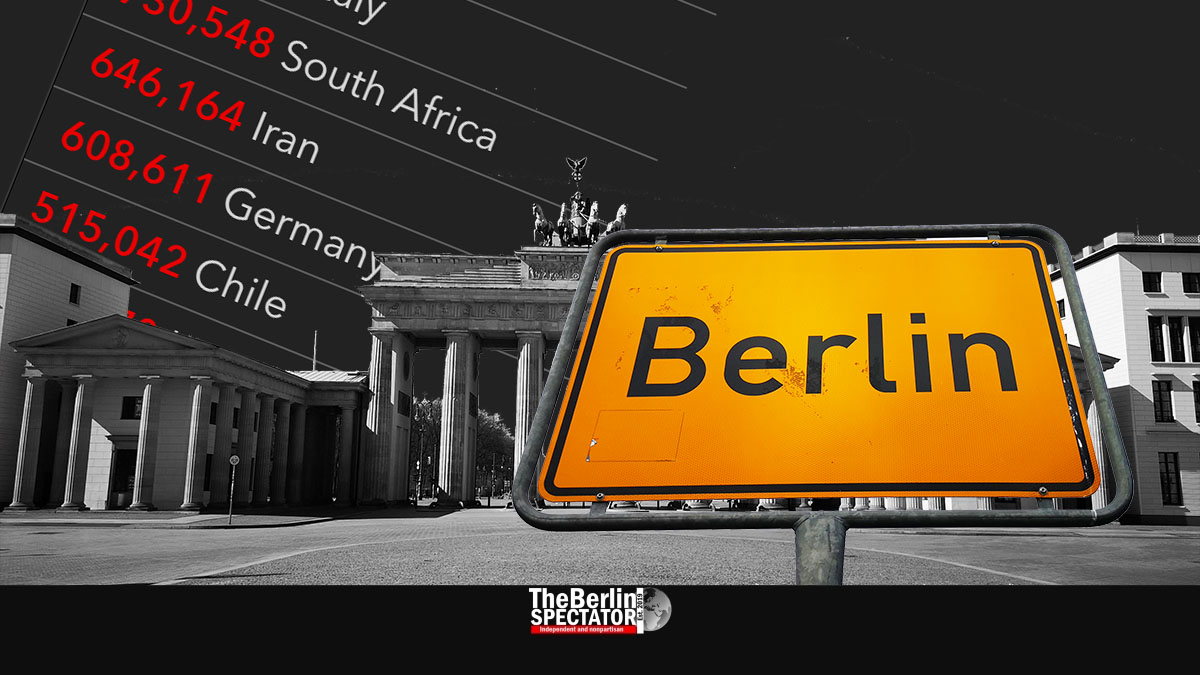 As many as 19,990 new Corona infections were reported in Germany within one day. It is the highest number the country has had since the Corona crisis commenced in January. The good news is that the Reproduction Number is starting to drop.

Berlin, November 5th, 2020 (The Berlin Spectator) — In Germany, the number of new Corona cases just hit a new record. According to the Robert Koch Institute (RKI) in Berlin, 19,990 new infections were registered within 24 hours. Comparing the numbers provided by Johns Hopkins University between Wednesday morning and this early morning even leads to a difference of 31,480.

Yesterday morning, 577,131 persons in Germany were infected, in total. Now that number stands at 608,611. It always depends on the moment numbers are being compared. The source the RKI uses is the same as the one Johns Hopkins University bases its numbers on. New infections are being reported by German labs, hospitals and doctor’s offices. The RKI announces its findings during the day, but the counts continue into the night.

Even the RKI’s number is the highest Germany has had since the Corona Crisis hit Germany in late January. It was a foregone conclusion that the partial lockdown that was put in place on Monday would unfold its effect with a delay. In a few days from now, the numbers might start dropping. In a week from now, the decrease might be substantial. At least this is the German government’s hope.

The Corona numbers for Berlin are still very high as well. The German capital’s Seven Day Incidence Number, which shows how many people got infected per 100,000 inhabitants within the past seven days, stands at 182.5. Below a level of 35, the authorities switch off the alarm bells, so to speak.

There is one positive value which might be connected to the partial lockdown: The Reproduction Number for Berlin has decreased to 0.77. What this means is that each infected individual will pass on the Coronavirus to 0.77 persons, statistically. Until recently, that number had often been above 1 or just below that critical level. For the entire country, the Reproduction Number dropped to 0.81 from 0.94.

What Berlin’s districts are concerned, their numbers do not look good. One of them, namely Neukölln, has a Seven Day Incidence Number of 330.7, which is basically off the chart. There are five more districts that are above or around 200. They are Friedrichshain-Kreuzberg, Reinickendorf, Tempelhof-Schöneberg, Spandau and Mitte. The remaining six Berlin districts stand between 100 and 165.

According to a poll conducted by YouGov, which is being mentioned by many German-language media, one in two Germans expects to have to spend the upcoming Christmas holiday in isolation. Fifty-two percent of all respondents believe families will have to celebrate Christmas apart from each other, in different households. More than half of all Germans believe restaurants, pubs and cafés will still be closed for Christmas.

In the meantime, Germany’s Foreign Minister Heiko Maas had to go into quarantine for the second time since early October. He had been in contact with a member of what the Foreign Ministry called a “foreign delegation” who tested positive for Corona afterwards. Several other Ministry officials who were involved are in quarantine as well.