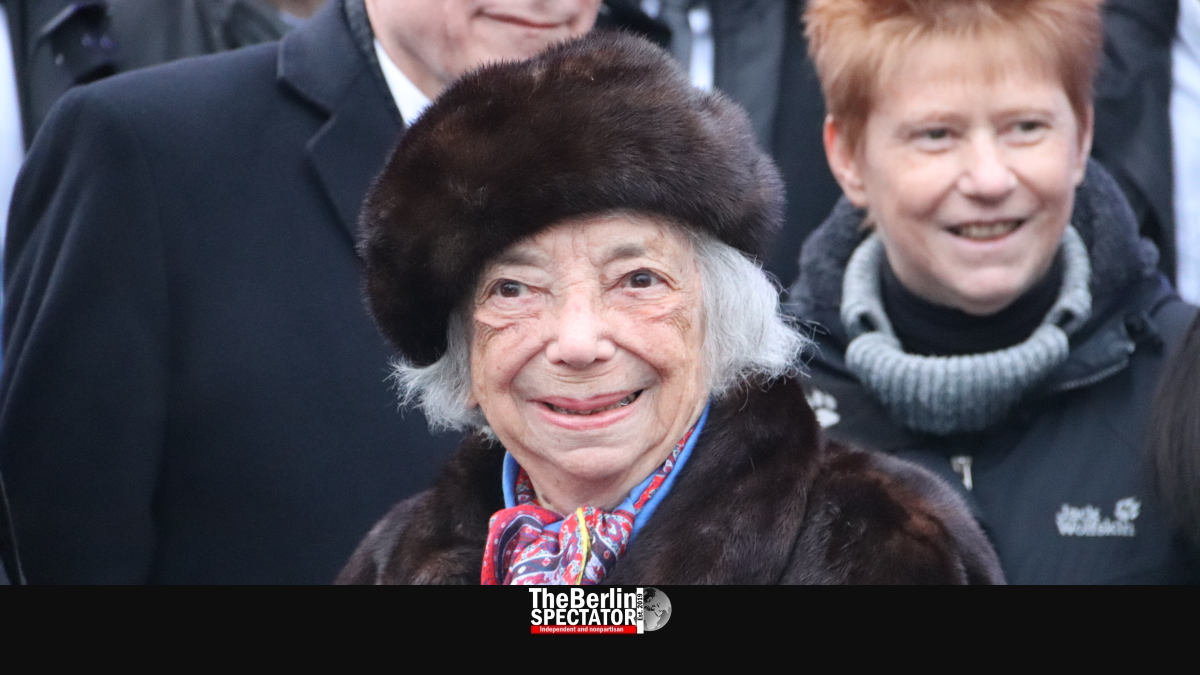 Margot Friedländer grew up in Kreuzberg. Her family was murdered by the Nazis. She survived Theresienstadt and emigrated to the United States. Ten years ago, she returned to Berlin.

Berlin, November 5th, 2020 (The Berlin Spectator) — If anyone is a real Berliner, it is Margot Friedländer who was born 99 years ago today, on November 5th, 1921, as Margot Bendheim. When she was twelve, Hitler came to power. After her parents’ divorce, she lived with her mother and younger brother Ralph, in an apartment in Kreuzberg’s Skalitzer Strasse.

‘Try To Make Your Life’

In 1938, it was high time to flee for any Jewish family or individual. But the United States of America did not let the Bendheims immigrate. Margot Bendheim’s father was murdered by the Nazis. In 1943, she, her mother and her brother Ralph were going to attempt to get out of Nazi Germany again, when he was arrested by the Gestapo.

Mrs. Bendheim handed herself in. She was not going to let her son go without trying to protect him. Both of them were deported to Auschwitz and murdered there. The siblings’ mother had left Margot a handbag with her contacts list and an amber necklace, as well as a message the neighbors delivered to her: “Try to make your life.” This was the last time she ever heard of her mother.

Until 1944, one year before the liberation of Europe, Margot Bendheim succeeded in hiding. She colored her hair, wore a chain with a Christian cross and lived with opponents of the Nazis. Then she was betrayed. The Nazis took her to Theresienstadt, where she met her future husband Adolf Friedländer. Both of them survived. In 1946, they boarded a ship to New York City where they became U.S. citizens.

Margot Friedländer’s husband died in 1997. In 2003, when she was 82 years old, the Berlin Senate under Governing Mayor Klaus Wowereit invited her to come to her birth city. Five years later, her autobiography entitled ‘Try to Make Your Life’ was released (link to English version at amazon.com).

In 2010, at age 89, Margot Friedländer returned to Berlin for good. She got her German citizenship back and has been living in the capital of Nazi Germany’s successor state, namely the Federal Republic of Germany, ever since. Before the Corona pandemic hit, she visited schools several times a week in order to tell students about her life.

Margot Friedländer was awarded the Order of Merit and other prizes after her return to Germany. In 2018, she became an honorary citizen of Berlin. In front of the Kreuzberg apartment building she used to live in, a ‘Stolperstein’ (‘stumbling block’ plate) on the ground says “Margot Bendheim, born in 1921, lived here, deported to Theresienstadt in 1944, survived” in German.

This afternoon, Berlin’s Governing Mayor Michael Müller stated Margot Friedländer was “a witness of the darkest chapter of our history”. Her educational work was “invaluable to our society” and Berlin was very thankful.

A happy 99th birthday to Margot Friedhändler, a true Berliner.