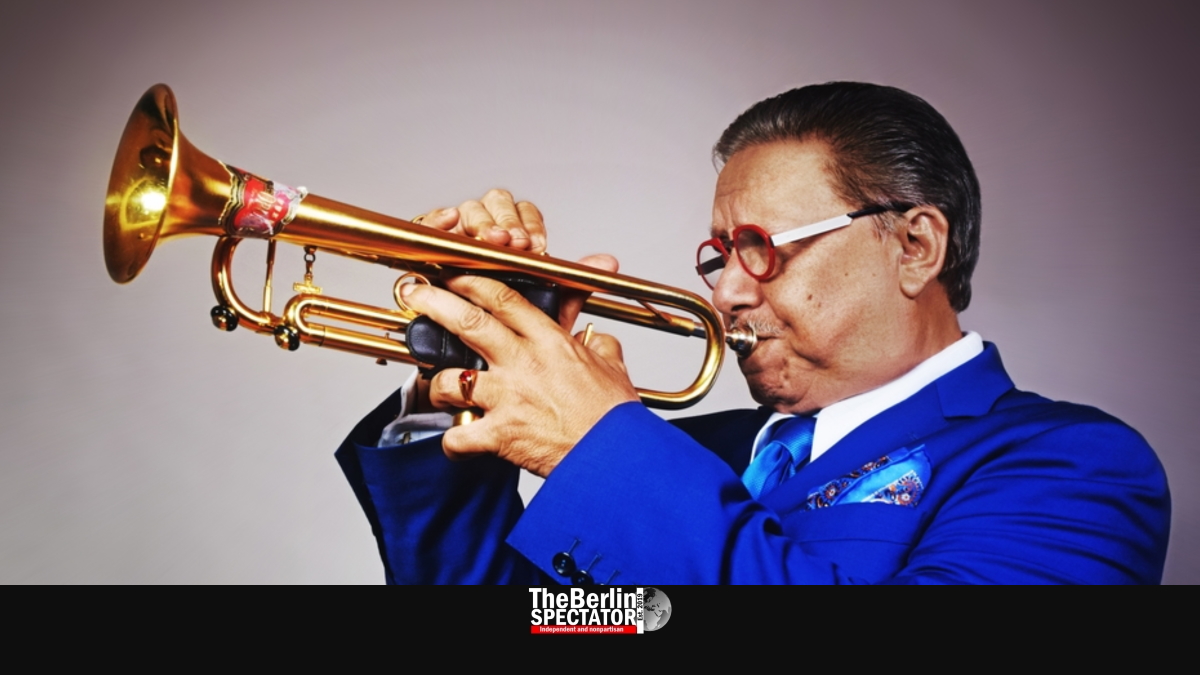 Arturo Sandoval is the measure of all things having to do with the trumpet. His biography is quite a story too. ‘Turi’ is turning 71 today.

Warning: This feature contains the word Grammy in its plural form.

Berlin, November 6th, 2019, updated November 6th, 2020 (The Berlin Spectator) — It was in 1979, when a young trumpet genius by the name of Arturo Sandoval stood on stage at the Auditorio Nacional in Mexico City, along with the other members of the Cuban group Irakere. People looked at them in disbelief. They could not believe their eyes or ears.

A Tsunami of Music

The performance delivered by the Cubans was nothing less than an explosion. Those sounds that hit the stunned audience could be described as a hurricane of Afro-Cuban-Jazz-Rock of a kind nobody in the hall had ever heard before. In a way, it felt like the Cuban version of Earth, Wind Fire, like a tsunami of music from a parallel universe which could not have been more energetic.

I was 13 years old, sitting in the audience and staring at the stage like in trance. I did not notice anything else around me, when Arturo and the other trumpet player in this 12-piece band, Jorge Varona, started their first trumpet battle. Arturo went higher and higher, who knows how many octaves he covered. All of them, including Enrique Plá, Chucho Valdés, Oscar Emilio Morales and Carlos Averhoff, played their asses off. These fireworks of music were something I would never forget.

A few years later, when I was still a teenager, we were in Havana. I was sitting in an elegant hall belonging to a luxury hotel, when Arturo Sandoval hit the stage, this time with his own band. Those were the times when “Turi” was recorded, an album produced at EGREM, Cuba’s state-owned record label. Again, he pulled it off, stunning his audience.

‘For Love and Country‘

Twenty years later, in Germany, I attended yet another two gigs of his and interviewed him afterwards, for a radio station. His escape from Cuba, the ‘Flight to Freedom’ he named a GRP album after, had just happened a few years before. He talked about Castro, the dictator, but also about Chucho Valdés and the guys whom he would always be ready to play with.

Arturo Sandoval lived in Miami by now, after an ordeal described in the HBO movie ‘For Love and Country: The Arturo Sandoval Story’, in which he was portrayed by none other than Andy Garcia. A defection would have been easy for a travelling musician, had he not fallen in love in Havana, with a lady who believed in the revolution. They defected anyway. It took years until the United States finally granted him the citizenship he had fought for so hard. Washington politicians made it happen.

Arturo Sandoval was already a star on his Caribbean island when the late Dizzy Gillespie came to Havana. He basically discovered him for the ‘West’. They toured together, and Gillespie helped him defect. The communists did give him an excellent education. But, similar to the late Milcho Leviev’s experience in another communist country, they told him what to play and what to think.

Playing on All Cylinders

Arturo does it all. Yes, he remembers late icons such as Clifford Brown, as he demonstrated on an entire album recorded in memory of him (‘I Remember Clifford’), he is into Brazilian rhythms (reference to ‘Caprichosos de la Habana’, a piece he did solo, plus another version with fellow defector Paquito D’Rivera), he stands on stage with Blood, Sweat & Tears, he does sentimental ballads like ‘Claudia’, and generally fires up all cylinders.

Arturo Sandoval records a lot of Straight Ahead Jazz and Latin sounds. And it’s all brilliant. “I like good music. It does not matter whether it is Michael Jackson or Jazz classics”, he told me in the 1990s. There is always some kind of surprise, for instance when the trumpet hero sits down behind the concert grand and plays that instrument like a God as well. Thanks to the supreme being, he does not have to carry the Steinway up the stairs to the stage.

Oh yes, this article contains the word Grammy. So, does ‘Turi’ have two Grammy Awards standing in his shelf? No. How about five? No. How does ten sound? And how about a total of nineteen Grammy nominations?

The big day is November 6th. A happy and funky 71st birthday to Arturo Sandoval, the energetic master, the Cuban trumpet genius, the guy who stuns his audience and makes sure those who listen do not believe what they see or hear. ¡Feliz cumpleaños, maestro!