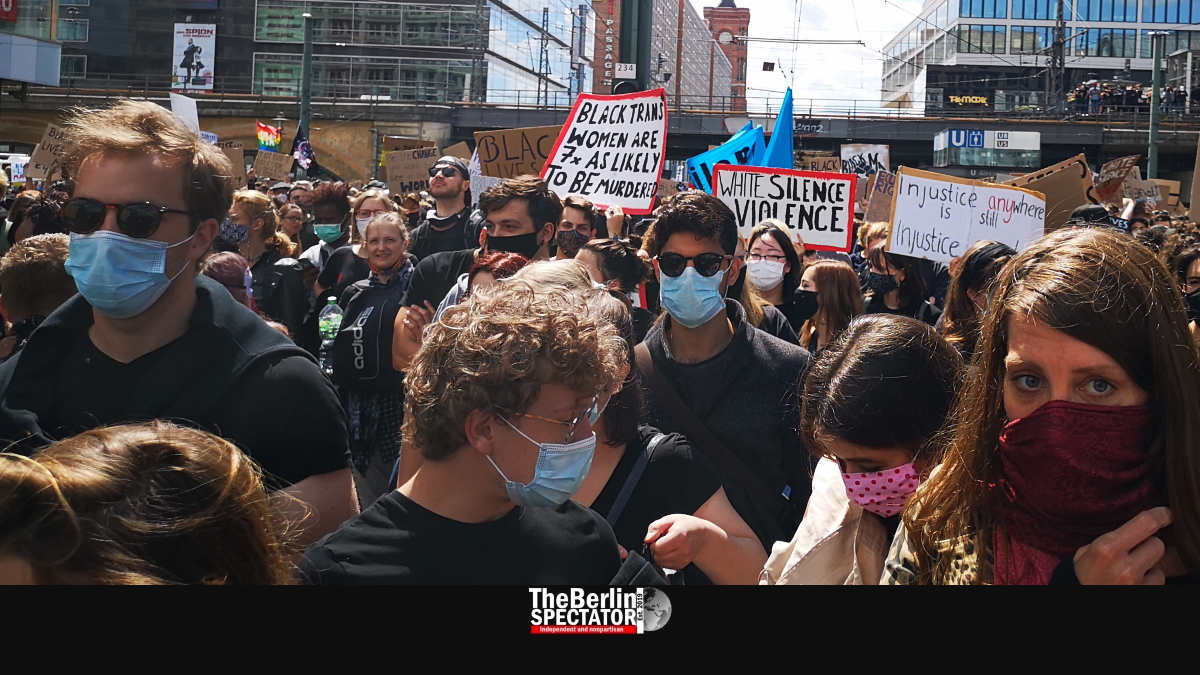 Berlin is one of the world capitals of protests. In spite of Corona, there have been more than 5,000 rallies this year alone. In the past decades, Berlin’s protesters made history in some cases. In others, they died.

Berlin, November 12th, 2020 (The Berlin Spectator) — In the Corona year 2020, the number of protests in Berlin did not decrease, in spite of it all. As a spokesman for the Berlin Police Department told The Berlin Spectator, as many as 5,010 rallies have taken place, as of yesterday. This year, Corona deniers and Nazis, but also the Black Lives Matter movement staged the biggest rallies. First, let’s rewind time by a hundred years.

On January 13th, 1920, Germany’s most tragic and bloody protest ever took place. While the Weimar National Assembly was in session at the Reichstag, some 100,000 people demonstrated in front of the building. They were left-wingers who intended to show solidarity with workers who wanted more say in companies. Those who staged the protest opposed a new law that was being discussed in the parliament. The police shot at protesters. Dozens were killed in what is known as the Reichstag Bloodbath.

Another historic Berlin protest occurred over several days in late February and early March of 1942 in Nazi Germany. During the ‘Rosenstrasse Demonstration’, non-Jewish Germans, mostly women who were married to Jewish men, demanded their spouses’ release. Earlier, 2000 Jews who were part of what the Nazis called ‘mixed marriages’, had been arrested. With a lot of courage, the participants of the rally defied Adolf Hitler’s regime.

On May 11th, 1952, seven years after Nazi Germany’s unconditional surrender, Berliners took to the streets in order to protest against the Federal Republic’s rearmament. One participant was shot by police. A year later, in June of 1953, the East German uprising against the communists in East Berlin was crushed by Soviet forces. Thirty-four protesters and several security officers were killed.

During the student revolution, on June 2nd, 1967, a rally against Mohammad Reza Pahlavi, the Shah of Persia, took place in West Berlin. A police man shot the student Benno Ohnesorg. This deadly incident increased the tensions in West Germany’s cities.

On the other side of the Berlin Wall, one of the most important Berlin protests ever took place thirty-one years ago, almost to the day. On November 4th, 1989, half a million GDR citizens rallied against their country’s communist regime. Only five days later, the Wall fell.

Since then, Berliners have protested against hate, both Gulf Wars and nuclear power. After the Japanese reactors in Fukushima blew following the tsunami, tens of thousands of Berliners were on the street, demanding the shutdown of all nuclear power plants in Germany. They will get what they wanted in 2022.

Berliners keep on staging protests today. Not all of them are big, but many are. The demonstrations the Berlin Police Department counts include those with one participant or tens of thousands of them. Individuals or organizations need to register their protests beforehand. In Corona times, the right to demonstrate was restricted in the spring of 2020 when the infection numbers skyrocketed.

Now, during the second Corona wave, Corona rules apply to all rallies. In case are not being followed, the police will end the event and send people home. According to the rules put in place by the Berlin Senate in early September of 2020, participants need to keep their distance (1.5 meters or 5 feet). Masks need to be worn if the number of participants exceeds 100 or when the police order the protesters to put them on.

The police in the German capital are busy with countless demonstrations every year. On a regular basis, they need reinforcement from other federal states. Also they call the Federal Police. Generally, the way German police deal with protesters has changed substantially since the 1960s and 1970s.

Even in the early 1980s, demonstrators for peace or against NPPs were fought with water guns and clubs in many cases. Today, the police try to act as a deescalating party. Their strategy is to cooperate with the organizers. It is an approach that works well in many cases, but not in all.

New Players on the Streets

Depending on the protests and their participants, the Berlin Police Department sometimes has to protect the city and its residents from them. Officers had to enforce rules in many cases even before Corona. Especially radicals, including far-left and far-right extremists and Islamists make things difficult for the police and the entire city. The more hatred is being taken to the streets, the higher the danger violence might erupt.

Environmentalists can be radical and difficult to handle, even those who are not really violent, for instance when they chain themselves to bridges, disrupt traffic like the radical organization Extinction Rebellion which is fighting “the system”. But they can also be peaceful like the Fridays for Future movement. In most cases, Berlin and its Police Department know what to expect.

Expatriates in Berlin stage protests too. For instance, Bulgarians in Berlin rally against the rampant corruption in their country on a regular basis. British Brexit opponents demonstrated in January. In February, a month before Corona hit Berlin, Chinese expatriates commemorated Lee Wenliang, the doctor who warned colleagues of Corona. In return, the Chinese authorities accused him of spreading “false comments” and of “disturbing the social order.” The whistleblower died of COVID-19 on February 7th.

Countless times, Corona deniers and Nazis teamed up for demonstrations in Berlin this year. It started with relatively small protests at Rosa Luxemburg Square, where the weirdest conspiracy theories about Corona were spread. Strong antisemitic tendencies were obvious from the start. Famous Jew-haters took part on a regular basis.

Then, in summer, deniers and haters organized a big rally. Thousands of supporters of the ‘Querdenker’ movement of Corona deniers were there. So were many Nazis, including famous ones.

In 2020, taxi drivers staged several protests. So did bus company owners who disagreed with Corona travel bans and people who wanted Germany to accept more refugees from Greece. In June, a human chain against racism was organized in Berlin. Gender equality was demanded at a rally in January.

One thing is a foregone conclusion: 2021 will be yet another year of protests, thousands of them, in Berlin.