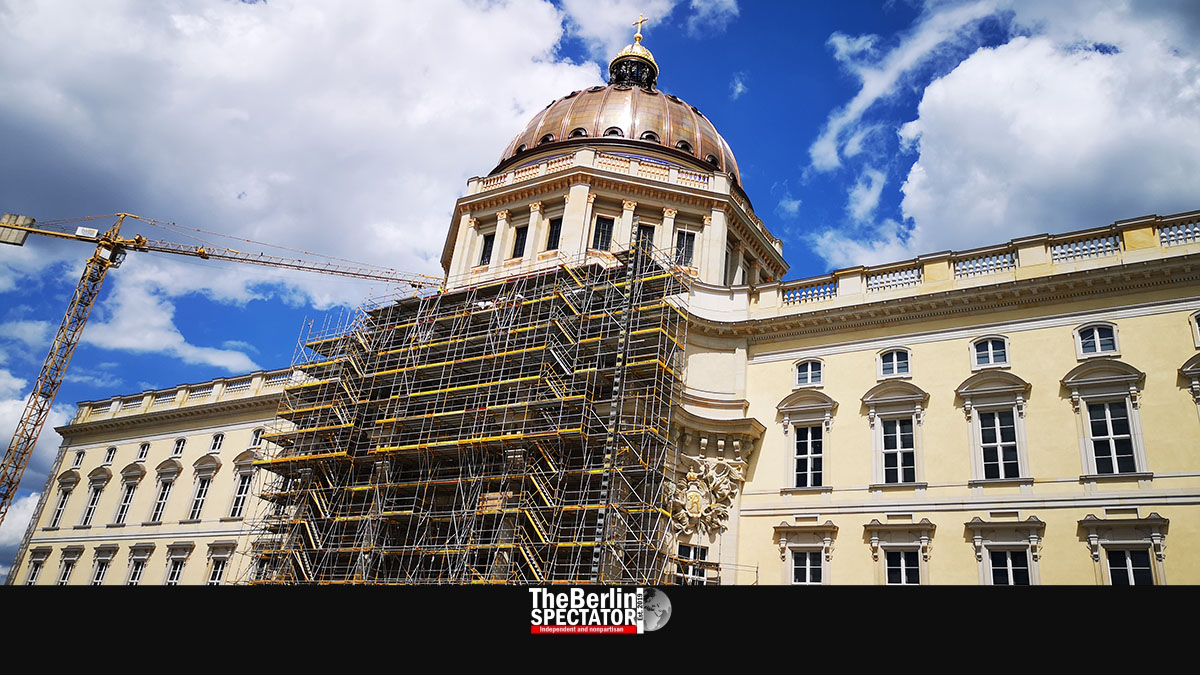 In the early 1990s, when part of the excitement about Germany’s reunification had evaporated, there were people who noticed something was missing in Berlin’s city center, namely the Berlin Palace. A reconstruction was discussed. The rest is history.

Berlin, November 13th, 2020 (The Berlin Spectator) — Berlin has a new airport, a new ‘U-Bahn’ subway line and a new palace, namely a reconstructed version of the original Berlin Place. Exactly 577 years ago, in the year 1443, its construction commenced. Its appearance changed over the centuries. For 500 years, until the early 20th century, the Palace served as the main residence for rulers, such as the Electors of Brandenburg, the Kings of Prussia and the German Emperors.

Damaged and Blown Up

A hundred years ago, in the Weimar Republic, the Berlin Palace became part of Berlin with the Greater Berlin Act. At that point, it was a multi-purpose building which accommodated the Museum of Decorative Arts. Classical music concert performances took place there as well. Then, the Nazis came to power. In 1945, when the Allies bombed Berlin just before they finally defeated fascist Nazi Germany, the Palace was damaged badly.

The GDR’s communist regime had the Berlin Palace, what was left of it, blown up in 1950. One of Berlin’s largest and most important historic buildings vanished. It was flattened and ceased to exist. By the time Germany was reunited in 1990, most younger Berliners probably did not even know the Berlin Palace had been there, and many older residents had basically forgotten about it.

Standing in the Way

But there also were those who starting suggesting the Berlin Palace should be rebuilt, at its original location on Museum Island. Of course there were some issues. First of all, the former GDR’s asbestos-contaminated Palace of the Republic was standing in the way.

Secondly, hardly anyone could imagine what the Berlin Palace had looked like, how big and how impressive it was. Photos of the original building were not convincing enough. An organization was founded, with the purpose of giving Berlin the one thing it did not know it wanted: the Palace.

So, the second version of the Berlin Place was built. It was fake, as it consisted of a giant, cubical scaffolding the size of the original building, and plastic backdrops with a French-made painting of the Palace. From a few blocks away, the simulation looked almost real. Berliners finally had an idea of what the old Palace had looked like. Temporarily, the Palace of the Republic magically disappeared. A huge mirror made it happen.

Once the Berlin Bundestag had taken the decision to rebuild the Berlin Palace in 2002, the details were discussed and problems were resolved. In 2008, the Palace of the Republic was finally gone. On June 12th, 2013, eight years after the city of Dresden completed a similar endeavor, namely the reconstruction of the ‘Frauenkirche’, the construction in Berlin commenced.

Unlike the ‘Frauenkirche’, the Berlin Palace would look like the original only in part. Three sides of the building were reconstructed, while the fourth one, the side visible from the Spree river, is modern and plain. The interior is very different from what the original Palace looked like. Franco Stella is the Italian architect responsible for the inside.

Constructing palaces has never been cheap. The total cost is 595 million Euro (702 million U.S. Dollars or 536 million Pounds Sterling), which is about one sixth of the price for BER Airport. The new ‘U-Bahn’ stations, one of which is ‘Museum’s Island’, located just a few steps from the Palace, and the tunnels that connect them, were a bit less expensive. But this is like comparing apples to oranges.

There is good and bad news. The good news is that part of the Berlin Palace is supposed to be inaugurated in December of 2020. The bad news? According to the ‘Spiegel’ weekly, there are technical issues that need to be resolved and might delay the inauguration. Has anyone ever heard of delayed inaugurations in or around Berlin? Of course not. The next bit of bad news is Corona. The pandemic will screw up the inauguration in the sense that far less people will be able to participate.

So, the first original version of the Berlin Palace was damaged in 1945 and blown up in 1950. Its second appearance was a simulation. And the third one, which will be opening soon, has a new name: Humboldt Forum. This means it will be named after Alexander von Humboldt and his brother Wilhelm.

The Forum will increase the number of museums on Museum Island substantially, by accommodating several additional ones. They include the Museum of Asian Art, the Ethnological Museum of Berlin and the City Museum. Yes, the Berlin Palace, a.k.a. the Humboldt Forum, has a lot of space. That is why Humboldt University’s Humboldt Laboratory will be moving to the Humboldt Forum as well. Yes, we love sentences that contain the name Humboldt three times.