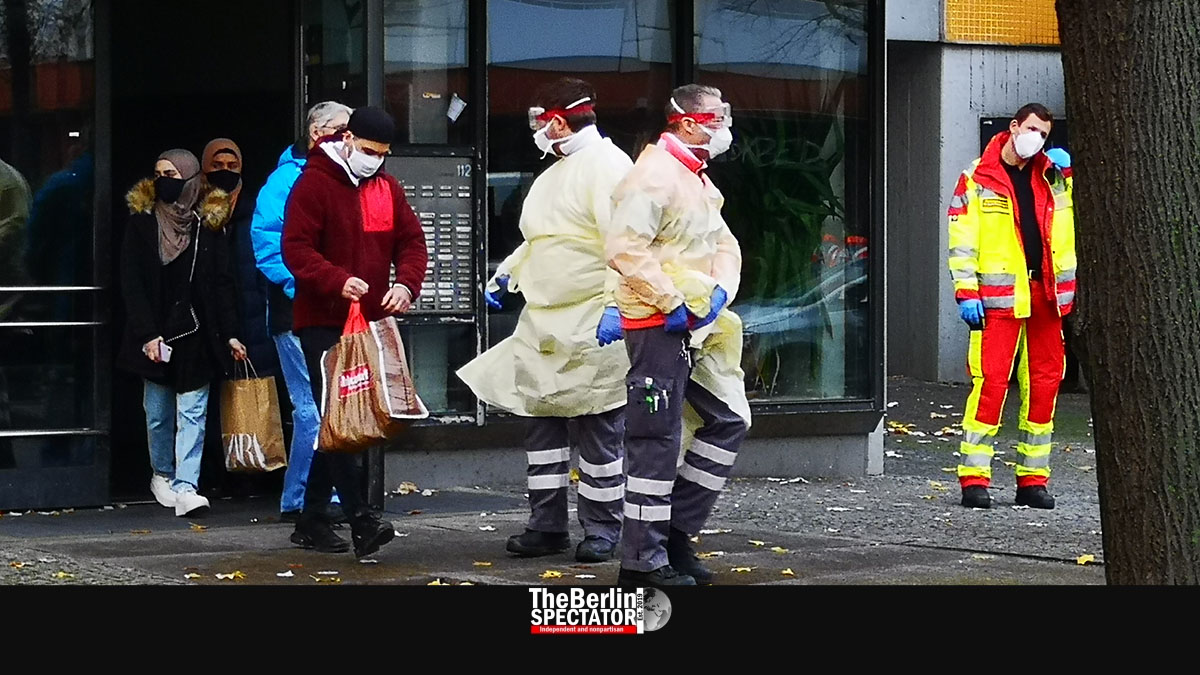 An American WWII bomb was found at a construction site in Berlin’s Kreuzberg borough on Friday. On Saturday morning, the Berlin Police started evacuating residents in the area, including some who are infected with Corona. The bomb was finally disarmed in the late afternoon.

Berlin, November 14th, 2020 UPDATE 5:53 p.m. (The Berlin Spectator) — An evacuation was underway in Kreuzberg on Saturday morning. By 8:00 a.m., the Berlin Police Department had taken position. Some 150 officers were involved. Their mission was to make sure 7,500 residents leave their homes temporarily.

In the neighborhood in question, at a construction site behind Berlin’s patent office, a World War II bomb had been found on Friday. The bomb disposal unit arrived before 9:00 a.m. One of its members told The Berlin Spectator, it was an American bomb with two fuses.

WWII bomb finds in Berlin are not really new, because the Allies dropped thousands of them as they were working on liberating Europe, by defeating Nazi Germany, in 1944 and 1945. But countless bombs that did not go off back then pose a danger to Berlin’s residents today.

An elderly lady, who was standing on her ground level balcony in her pajamas this morning, was not really prepared to leave yet. She seemed confused and had not gotten the message about the evacuation. With a lot of patience, police officers explained everything to her an hour later, once she was out on the street with her rollator walking device.

Getting access to all apartment buildings in a perimeter set up around Neuenburger Strasse took some time. Residents in parts of Alte Jakobstrasse, Lindenstrasse, Alexandrinenstrasse, Gitschiner Strasse and Franz Künstler Strasse were affected as well. Lots of apartment blocks are located there.

Several persons infected with Corona were part of the 7,500 residents who had no choice but to leave their homes for a few hours. Berlin’s Friedrichshain-Kreuzberg district rented several hotels all over the city to accommodate people. Residents were taken to places assigned to them. They included asylum seekers from a refugee hostel in the neighborhood.

Evacuating thousands of people is never easy. But during the Corona pandemic, endeavors of this kind are far more complicated. In front of a huge apartment building on Alte Jacobstrasse, medics dressed in protective gear helped some infected individuals as they were walking to special ambulances that waited for them. Minutes later, several elderly ladies were accompanied to vehicles which were supposed to take them to their emergency accommodations.

A police officer who was involved in the evacuation told The Berlin Spectator’s reporter, about half the residents had already known what to expect, while the other half had not. Two police trucks circled the neighborhood while pre-recorded messages about the mandatory evacuation were played through loudspeakers installed on their roofs.

The order to evacuate was played in three languages. English was not among them, but another Germanic language known as German. So were Turkish and Arabic.

For the Berlin Police Department, a spokesman told The Berlin Spectator this morning it was unclear at what hour the evacuation process would be completed. In the meantime, the bomb disposal team was waiting. The experts were going to defuse the 250 kilo bomb once they got a green light from the operational command.

In the afternoon, the U-Bahn train lines 1 and 3 were stopped temporarily, while bus lines M41 and 248 were rerouted. Due to Corona and the ongoing partial lockdown, Berlin’s Jewish Museum, which is located in the area as well, did not have to be evacuated.

Then, after 5:00 p.m., the disposal unit reported a successful disarming of the bomb. Residents started returning to their homes.