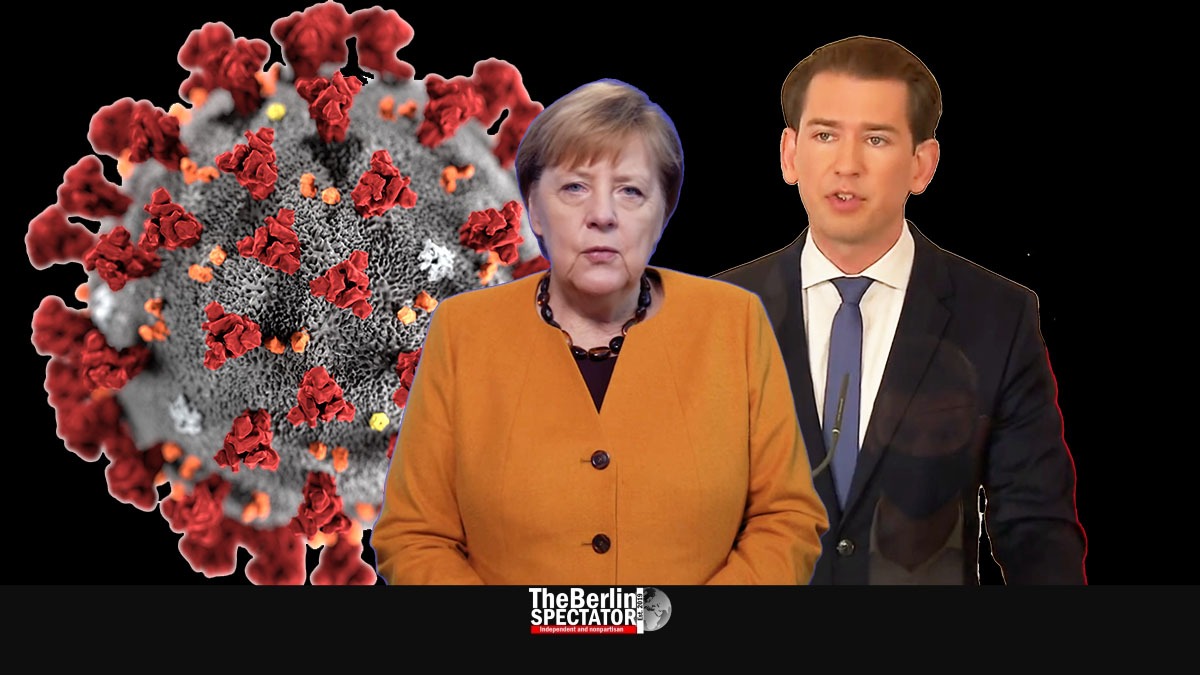 In Germany, Angela Merkel and other high-ranking politicians have made clear that the Corona restrictions will not be eased anytime soon. On Monday, the Chancellor and the First Ministers might take new decisions. Neighboring Austria already has.

Berlin, November 15th, 2020 (The Berlin Spectator) — In Germany, Angela Merkel prepared the nation for several tough months. “The upcoming winter will demand a great deal from us”, the Chancellor said in her regular video podcast. “The virus will define our lives for quite a while longer”, she predicted. People would not be able to meet directly.

Commerce Minister Peter Altmaier said in an interview with the ‘Bild am Sonntag’ weekly, the Corona infection numbers were still “far too high, and a lot higher than two weeks ago”. An improvement had not been reached yet. Therefore, opening restaurants and cinemas was premature.

Altmaier said Germany could not afford “a yoyo shutdown” during which the economy would be closed and reopened all the time. According to the Minister, the Germans have to expect restrictions far beyond December. “We will have to live with substantial restrictions for the next four to five months”, he said in the interview.

Ahead of Mrs. Merkel’s Corona meeting on Monday, several First Ministers have voiced their opinion on the way Germany should go into the coming weeks. Saxony’s head of government Michael Kretschmer said the restrictions could not be eased because of the high number of new infections. He pleaded for another Corona meeting the week after next.

His Bavarian colleague Markus Söder made clear there would be no easing of any restrictions until the end of November. He said it remained to be seen whether the partial lockdown would have to be prolonged. Germany’s Health Minister Jens Spahn said the next weeks, “and probably months”, would be tough. It took very long to get Corona infection numbers down, Spahn said. “The virus has extremely long braking marks.”

The situation remains serious. The total number of Corona infections in Germany almost hit 800,000. It stood at 799,733 on Sunday in the early morning. In Berlin, seven districts have Seven Day Incidence Numbers higher than 200 by now. They are ‘Mitte’ (350, no typo), Tempelhof-Schöneberg (274.1), Neukölln (260.7), Reinickendorf (244), Friedrichshain-Kreuzberg (221.8) and Charlottenburg-Wilmersdorf (213). The remaining five districts stand between 100 and 200, which is already very high.

While Chancellor Merkel and the First Ministers will discuss possible changes to the Corona rules on Monday, the Austrian government already has. In Vienna, Chancellor Sebastian Kurz announced drastic measures. During a strict lockdown, people in Austria are not supposed to meet anymore, retail businesses that are not vital — in the truest sense of the word — have to close. Restaurants, cafés and pubs are already closed in Austria.

Until December 6th, 2020, only existential businesses and offices are supposed to remain open. Kurz mentioned supermarkets, post offices, banks and pharmacies. He said hairdressers, beauty parlors and similar services needed to pause as well. Schools are supposed to offer online classes only. Austria’s full lockdown will commence on Tuesday, November 17th, and last until December 6th or further notice.

‘Do Not Meet Anyone’

“Do not meet anyone”, Chancellor Kurz said at a press conference in Vienna. “Each social contact is one too many.” He asked Austrians and other nationals who reside in Austria to spend time with the people they live with. Individuals who live alone are supposed to pick one person they want to be in contact with directly.

So far, Austria had a curfew from 8:00 p.m. to 6:00 a.m.. Starting on Tuesday, it will be in place 24 hours a day. People may leave their homes to shop for food or medication, to help others, to go to work, to take walks or engage in sports activities. This is the kind of curfew both Austria and Germany had put in place in spring as well, when Corona hit for the first time.

Austria’s Vice Chancellor Werner Kogler announced financial help for businesses affected by the new lockdown. He said payments would be made more quickly than they had been in neighboring Germany.