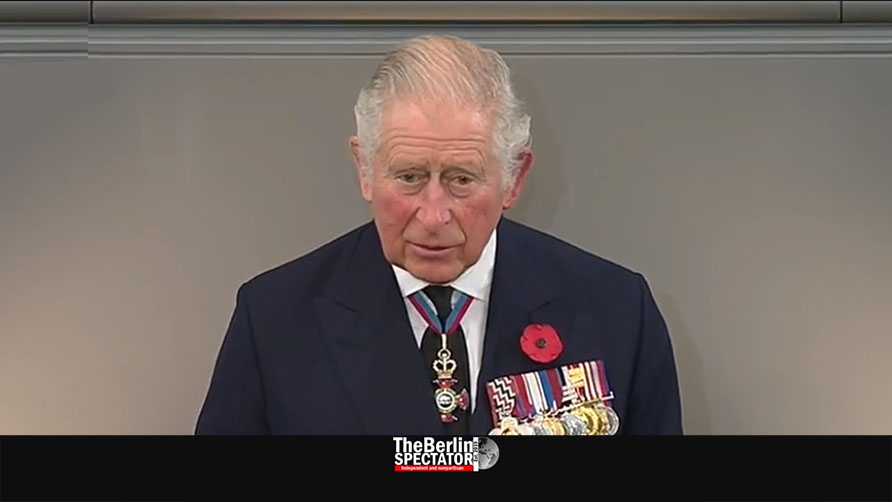 In Berlin, Prince Charles and Duchess Camilla took part in a ceremony on the National Day of Mourning. The Prince of Wales held a speech at the Berlin Bundestag, both in English and German.

Berlin, November 15th, 2020 (The Berlin Spectator) — During today’s ceremony for the National Day of Mourning at the Berlin Bundestag, Prince Charles held part of his speech in excellent German, to the surprise of some of the hosts. Four and a half years after Britain decided to leave the European Union, he stated the “fundamental bond” between the United Kingdom and Germany would remain strong.

“The United Kingdom has chosen a future outside the European Union, and the relationship between our countries is evolving once again”, Prince Charles said. “Its shape is a matter negotiated between our governments, and its essence is defined by the enduring connections between our people.

It was his “heartfelt belief that the fundamental bond between us will remain strong”, the Prince of Wales stressed in Berlin. “We will always be friends, partners and allies.” He also stated the histories of both countries would “bind us tightly together and our destinies, although each our own to forge, are interdependent to a considerable degree.”

Earlier on Saturday, the Prince of Wales and Camilla had landed at Berlin’s new BER Airport, where they had been welcomed by Jill Gallard, the British Ambassador to Germany. Shortly after, the guests were welcomed by Germany’s President Frank-Walter Steinmeier.

“We, the Germans, are very thankful to Prince Charles and Duchess Camilla for this remarkable gesture of reconciliation and attachment in these extraordinary times”, Steinmeier said after meeting the guests at the Bellevue Palace. “It is our wish and firm intention to preserve the good neighborhood and close partnership between the United Kingdom and Germany in the future as well.”

With Steinmeier, Defense Minister Annegret Kramp-Karrenbauer and other officials, Prince Charles and Camilla attended a wreath-laying ceremony for the National Day of Mourning at the ‘Neue Wache’ memorial in Berlin. In the afternoon, they went to the Berlin Bundestag, where the Prince of Wales held his speech.

This year’s National Day of Mourning for the victims of National Socialism and the dead of both World Wars is dedicated to German-British friendship. President Steinmeier had invited Prince Charles and Camilla to come to Berlin. The Prince of Wales has been to the German capital more than thirty times since 1962. This includes both official and private visits.

Even though both the guests from Britain and their German hosts wore masks and practiced distancing, the visit gave some Germans a sense of normality, just for a moment, as they watched the ceremony on TV, in the worst crisis in decades.

Prince Charles did not meet Angela Merkel during this visit, but spoke to her on the phone beforehand. The Chancellor was not involved in the National Day of Mourning ceremony.