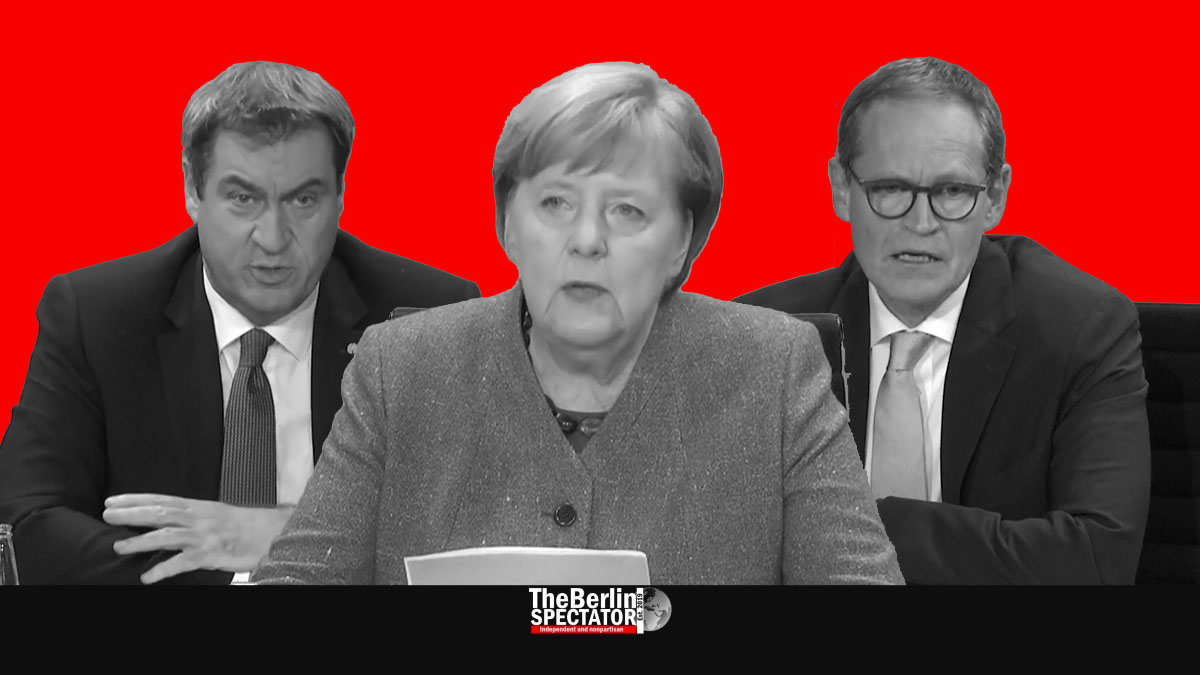 In Germany, the federal states disagreed with Chancellor Angela Merkel in regard to a tightening of the Corona rules she had insisted on. The outcome of yesterday’s Corona deliberations was a new appeal to the nation.

Berlin, November 17th, 2020, (The Berlin Spectator) — A majority of the First Ministers Angela Merkel discussed the Corona situation with wanted to wait and see whether the ongoing second Corona wave slows down further before they agree to new measures. So they rebuffed Merkel’s initiative. She had wanted to implement stricter contact and school rules right now. But, in the end, moves of this kind were postponed to Wednesday of next week, when the next meeting takes place.

No Trips, No Parties

After the discussion on Monday, which took five hours, Angela Merkel appealed to the nation to refrain from having private parties. She asked people to meet members from one other household only, and always the same one. This approach needed to include children and adolescents, she said.

Germans and residents with other nationalities had to refrain from using public transport whenever possible, and from taking daytrips or any touristic excursions, the Chancellor stated. On top of it all, elderly or vulnerable persons should only be visited by persons without symptoms.

Goal is Far Away

Angela Merkel explained the exponential growth in regard to new Corona infections had been broken, but Germany was still far from reaching its goal to decrease the Seven Day Incidence Number. The government wants it to be below 50. At this stage, Germany stands at 143.3.

In the early morning on Tuesday, the total number of Corona infections stood at 817,526. On Monday morning, there had been 12,367 cases less, according to Johns Hopkins University. The Robert Koch Institute in Berlin counted 14,419 new infections since Monday morning.

Berlin is Germany’s main Corona hotspot. Here, the partial lockdown has not decreased the numbers or the growth too much, so far. The city’s Seven Day Incidence Number was 224.8 this morning. As many as 1,337 new Coronavirus cases were reported within 24 hours, between Sunday and Monday.

Two of Berlin’s districts, namely ‘Mitte’ and ‘Neukölln’ have Seven Day Incidence Numbers that exceed 300 by far. Five more districts stand above 200, and the remaining five districts between 100 and 200. For the first time, as many as 1,000 Corona patients are being treated in Berlin’s hospitals, 274 are in intensive care. Out of the latter, 222 patients are on respirators. The situation remains worrisome, as Governing Mayor Michael Müller put it on Monday night.

Bavaria’s First Minister Markus Söder did not sound too optimistic. He said he did not believe everything would be fine at the end of this month. Söder also defended Bavaria’s school rules. Primary school kids in the federal state already wear masks. In most other states, they do not. Regarding the upcoming holidays, he was more afraid of New Year’s Eve than of Christmas, Söder stated. He was referring to wild parties that are usually being celebrated.

In Austria, one of Germany’s nine neighbors, the Corona situation is even worse. For that reason, the government in Vienna had announced a strict lockdown on November 14th. It starts today and ends in three weeks from now. From now on, Austrians and other nationals who live in Austria need a valid reason for leaving their homes.